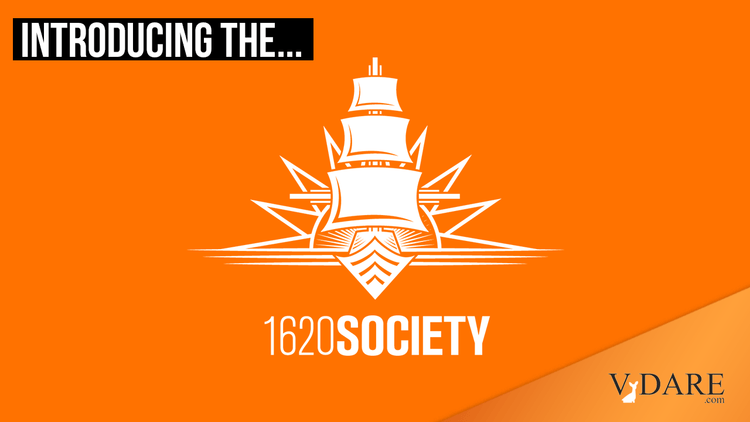 By the grace of God and our far-sighted donors, the VDARE Foundation has a magnificent new home in a welcoming community. Built into the side of Warm Springs Mountain overlooking the lovely historic spa of Berkeley Springs, West Virginia, where George Washington famously bathed in the mineral water, stands the beautiful 19th century Berkeley Springs Castle aka the Samuel Taylor Suit Cottage. Surrounded by forested ridges and valleys, this stunning stone property represents the perfect combination of refinement and wilderness, the twin beauties of America’s cultural and natural resources.

The VDARE Foundation values strong regional identities and the protection of America’s national heritage through sound immigration policies. This castle provides room for growth in our mission.

It gives VDARE a place for meetings and conferences that cannot be canceled by ANTIFA intimidation—as happened 10 times previously over a four-year span. These gates will always be open and welcoming to VDARE’s friends and donors.

Berkeley Springs Castle has a long and romantic history, having been built in 1885 by a wealthy entrepreneur keeping a promise made to his young bride. Now these secure walls house the leading defender of traditional Americanism—VDARE Foundation.

There are many accounts of the castle’s history. One of the most illuminating is a small pamphlet titled “Berkeley Castle” by local postmaster and town historian Frederick T. Newbraugh. From the preface:

“Old Castles, wherever they are located in the world, invite sagas of romance, intrigue, mystery, and thriller stories. The Suit Castle is no exception. Because so little is known and that so little is overshadowed by more interesting and entertaining hoax, it was exceptionally vulnerable to embellishment by those chroniclers of fiction and fantasy.

Frequently articles appear in neighborhood daily papers by eager beaver youthful reporters looking for an exciting story. They used quotation marks, the journalist’s escape hatch, as a preemptive disclaimer for inaccuracies in the story (poor reporting). They seldom retract or correct their stories and if they do it’s in the fine print. This hit-and-run journalism is bad because in years to come it will be repeated by another novice.”

Of course, “hit-and-run” journalism has only gotten worse. We at the VDARE know this all too well.

And yet, despite hoax and disinformation, the castle stands. And despite smears and attacks, VDARE thrives. Now permanently established in Berkeley Springs, VDARE will never cease its vigilant defense of America.

As the finale of VDARE.com’s 20th Anniversary approaches, I ask you to join with us at the castle to bring the brightest minds and most productive talents to apply themselves to keeping America American.

To that end, I am pleased to unveil: VDARE Foundation’s 1620 Society.

The 1620 Society is a select group of patriots who stand in a meaningful way with the VDARE Foundation in the struggle to preserve the Historic American Nation and maintain control of America's national borders. For a recurring donation of $100 per month or $1200 per year, 1620 Society members get early access to VDARE conferences and events, a special newsletter that shares Berkeley Castle news and updates, and an invitation to the annual 1620 Society Dinner hosted in the Great Hall of the castle itself. The dinner will feature the best of food and lively conversation with like-minded patriots, all in our matchless ambiance.

Just go to VDARE.com’s Donate Page and, in the top left corner, check the boxes for $100 and “Recurring Donations.” You’ll get a grateful email!

I hope you will consider joining. VDARE’s work can only be accomplished with the support of generous donors who share our commitment to truth, courage, and patriotic immigration reform.

Why 1620? Because we are inspired by the example of the Pilgrims, who exactly 400 years ago this fall, risked everything in righteous dissent. The government that developed from the Pilgrim’s Mayflower Compact was no “experiment.” It was the political expression of a particular people. It flowed naturally from English concepts of rights and modes of government that were a thousand years in the making.

Today, 400 years later, the culture and tradition on which America was founded —which started at Roanoke, Jamestown and Plymouth Rock, which made us free and made us great — is seriously threatened. Radical Globalists want to flood the nation with people from everywhere, especially from cultures deeply foreign to our own. The resulting chaos and destruction of our nation—that is, of our people and our home—is just a detail to them, an opportunity even, to remake the nation and the world, scrapping us and everything we have achieved.

VDARE.com writers, readers and supporters know that experimental governments intent on remaking the world have universally ended in brutal dictatorships and horror. They know that of all the nations in history, none has provided both material plenty and freedom from oppression on a scale even approaching that provided by the Historic American Nation.

However, patriotic Americans are now systematically censored and suppressed by globalist autocrats and tech oligarchs. VDARE.com itself has been censored and deplatformed from social media. Our web presence has been threatened. We have been cut off from some of the basics of free commerce including certain credit cards and banking services. We know it will get worse. Yet VDARE stands firm in the face of hatred and oppression.

Like the Pilgrims of 1620, we know we must dissent, and we do so even though the cost is high. We must continue to hold the torch, to guard and protect the "land where my fathers died; land of the Pilgrims' pride."

In the second verse of her 1893 hymn, America the Beautiful,  Katharine Lee Bates wrote:

O beautiful for pilgrim feet
Whose stern impassioned stress
A thoroughfare of freedom beat
Across the wilderness!

Indeed. Together, the 1620 Society members are the proud cultural heirs of those Pilgrims. Please join us today!

See you at the castle,

PS: Please know that all members of the 1620 Society will receive a special token of our appreciation—an exclusive 1620 Society lapel pin!