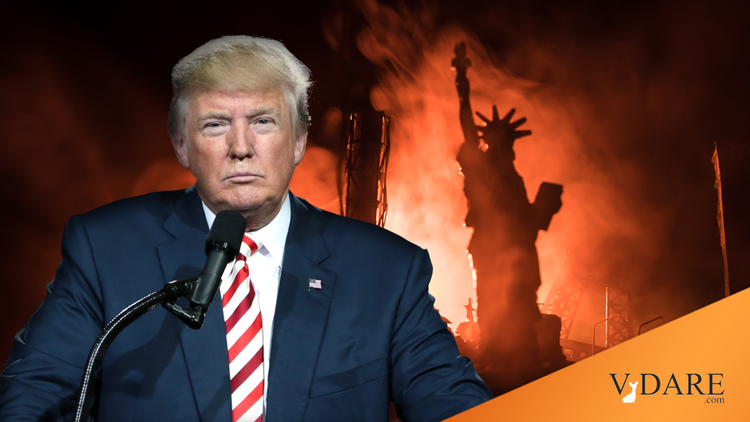 2020 will surely qualify as an "annus horribilis" in the history of the Republic.

By New Year's, one in every 1,000 Americans, 330,000, will be dead from the worst pandemic in 100 years. The U.S. economy will have sustained a blow to rival the worst year of the Great Depression.

And by the end of December, much of the nation will be back in lockdown, with Joe Biden repeatedly predicting a "dark winter" ahead.

Only at the apex of World War II has the U.S. deficit and debt been so large a share of our economy.

In the wake of George Floyd's death in Minneapolis, the summer of 2020 produced riots the extent of which rivaled the week after the murder of Martin Luther King in 1968.

Also revealed by the BLM uprising of 2020 was an unknown depth of hatred many U.S. citizens have for their country's history, as they pulled down and smashed statues of men once revered as the greatest leaders—Washington, Jefferson, Jackson, Lee, Grant, Theodore Roosevelt, Woodrow Wilson.

By year's end, tens of millions were denying the legitimacy of the designated president-elect, who was to take office on Jan. 20. Both parties were charging the other with trying to "steal" the presidency.

Can a nation so distracted, so divided, so at war with itself continue to meet all of the duties, obligations and commitments that are ours as the self-proclaimed "leader of the free world"? Are we still the people and country we used to be?

While we tear ourselves apart, we remain obligated to defend nearly 30 nations of Europe from Russia. We are committed to ostracizing and isolating Iran and going to war if she should seek to build nuclear weapons like those held by her neighbors Israel, Pakistan, India, Russia and China.

Why is this our duty?

We are strategically "pivoting" to Asia to contain a China that is the rising power of the new century and whose economy and armed forces rival our own, while its population is four times larger.

If South Korea is attacked by the North, or Japan or the Philippines find themselves fighting China over rocks in the South and East China seas, we are obligated to treat any Chinese attack as an attack upon us.

Three decades ago, historian Paul Kennedy used the term "imperial overstretch" to describe what happens to great powers when their global commitments become too extensive to sustain.

This happened to the British at the end of World War II when, bled, broken and bankrupted by the six-year war with Germany, she began to shed her colonies. In the fall of 1956, Prime Minister Anthony Eden, Churchill's foreign secretary, was ordered by President Eisenhower to get his troops out of Suez under an American threat to sink the British pound.

The British Empire was finished.

The imperial overstretch of the Soviet Empire was exposed from 1989 to 1991, with the withdrawal of its forces from Afghanistan, the fall of the Berlin Wall and the collapse of the Iron Curtain. The captive nations of Eastern Europe broke free. The USSR then disintegrated along ethnic and tribal lines into 15 nations.

On Dec. 2, at Brookings Institution, joint chiefs chair Gen. Mark Milley said: "There's a considerable amount that the United States expends on overseas deployments, on overseas bases and locations, etc. Is every one of those absolutely, positively necessary for the defense of the United States?" The Defense Department, Milley added, must "take a hard look at what we do, where we do it."

In a separate talk at the United States Naval Institute, the chairman added that U.S. permanent basing arrangements are "derivative of where World War II ended."

Indeed, NATO was formed and its war guarantees were issued to Western Europe in 1949, seven decades ago. War guarantees to South Korea, Japan, the Philippines and Australia were all issued from 1950 to 1960.

These commitments to go to war for other nations were issued when Stalin was in the Kremlin, a 400,000-man Red Army sat on the Elbe in Germany, and Mao and his madness had just come to power in Peking.

How long must we sustain all these alliances and soldier on in the "forever wars" of the Middle East? Do we Americans still have the national unity, sense of purpose, and disposition to sacrifice for the cause of Western civilization we had in the early days of the Cold War?

Or has our own Suez moment arrived?

President Trump did not extricate us from the "forever wars," but he did draw down our troop levels in Afghanistan and Iraq. And he did raise the question of how many more decades must we defend a rich Europe from a declining Russia that has a fourth of its population and a tenth of its wealth.

Post
We Call This Treason: Mayorkas Admits 12,000+ Illegal Aliens Released in USA—After Promising They Would Be Repatriated
MORE...
POPULAR TAGS