How pathetic have Democrat politics become when a freshman senator with no accomplishments thinks she can make a credible run for president? Kamala Harris apparently believes being a California Trump-resister socialist entitles her.

It’s also advantageous that she has multiple diversity going for her: she’s a black-Indian woman with an immigrant mother. In the increasingly tribal world of politics, Kamala can run separate ads targeting those several groups, appealing to their issues rather than American issues of law and safety. Perish the thought of patriotism: Democrats disapprove of American values.

A recent article from The Hill is too polite to mention her casting-couch start in politics: she was a 29-year-old deputy district attorney when she caught the eye of powerful California Assembly Speaker Willie Brown, a man 30 years her senior. Their affair was political as well as sexual: he promoted her career, getting her started on her political ascension.

Speaker Willie Brown awarded girlfriend Kamala a high paying patronage position at the California Medical Assistance Commission that met only once a month. 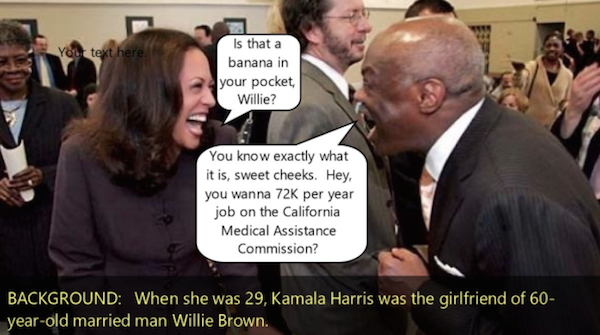 The Hill sticks to the political, pointing out that Kamala has staked out leftward positions.

Sen. Kamala Harris is increasingly positioning herself for a what is expected to be a crowded Democratic primary for the White House in 2020.

The former California attorney general, who is just at the beginning of her second year in the Senate, is taking positions that could endear herself with the Democratic base while allowing her to stand out from a group of Democrats who might seek the progressive mantle.

Harris voted against a Senate immigration bill backed by centrists from both parties earlier this month, waiting until the last minute to break with other liberals such as Sens. Bernie Sanders (I-Vt.) and Elizabeth Warren (D-Mass.), who both backed the measure.

She argued that while the bill would provide a pathway to citizenship for young immigrants who entered the country illegally, she could not support it in good conscience because of the inclusion of money for President Trump’s proposed wall on the Mexican border.

“While this bill would put Dreamers on a pathway toward citizenship, the appropriation of $25 billion for a border wall is a waste of taxpayer money,” she said. “A wall will not secure our border and I remain concerned those billions of dollars may also be used to implement this Administration’s anti-immigrant agenda — one that targets California and its residents.”