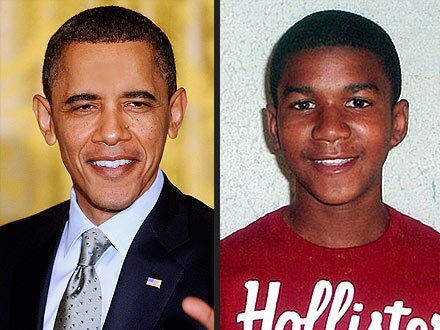 Thousands gathered Saturday at rallies in more than 100 cities nationwide to remember Trayvon Martin, to press for federal civil rights charges against the man who shot him, and to attack stand-your-ground self-defense laws.  (by John Bacon, July 20 2013)

The Leftist-Main Stream Media Complex took a little time to get going, maybe because they really believed their own propaganda and were stunned by George Zimmerman’s acquittal, but the Community-Organizer-In-Chief’s disingenuous speech Friday has spurred things along—just like his helpful reminder that Martin would have looked like a little Obama Jr. as last year’s hysteria was being orchestrated.

I watched the Martin/ Zimmerman trial carefully. And—unlike many VDARE.com readers and, let it be noted, all MSM Bigfoots—I have lived all my life surrounded by “diversity” in New York’s outer boroughs. My thoughts:

I. Blacks Don’t Mean What They Say

On Friday, the race-man-in-chief led another “dialogue” on his favorite subject: Whites are racists.

For generations, it’s always been the same “conversation”: blacks lecture, hector, and demand that whites agree that 2 + 2 = 5.

In 2008, after Barack Obama was exposed as an adherent of genocidal Black Liberation Theology, he notoriously threw his octogenarian white maternal grandmother under the bus by saying that she had “once confessed her fear of black men who passed her by on the street.” (Actually, she was just worried about a specific suspicious black man on her way to work.) [Transcript: Barack Obama's Speech on Race, NPR, March 18, 2008.]

In Friday’s monologue, Obama talked of, how prior to his political career, white women would see him approaching, and clutch their purses and lock their car doors; of his sponsorship as a state senator of an Illinois law prohibiting “racial profiling”; and of his desire to have all “Stand Your Ground” laws repealed, even though SYG was irrelevant to this case. [President Obama’s remarks on Trayvon Martin (full transcript), Washington Post, July 19, 2013.]

But blacks, even black nationalists like actor-director Mario Van Peebles who celebrate murderous black men, clutch their purses and lock their car doors at the sight of even harmless black men. Indeed, Obama himself has confessed to doing this.

And there’s a simple reason: A white who doesn’t take such precautions, as do prudent blacks, is a white who is going to be harmed or murdered. Every single day in America, blacks murder whites, often in horrific fashion.

Laws banning “racial profiling” have but one purpose: Aiding and abetting black criminals. Ditto for repealing Stand Your Ground laws, which have disproportionately helped blacks.

I will stipulate: even now, I have found one righteous black man: The Zimmerman Case Exposes Black Racism by Kevin Jackson, (The Black Sphere with Kevin Jackson, July 11, 2013.)

And time was, I really cared about conversing with blacks. But that was back when I was my teens and early twenties and considered myself a liberal.

Thus circa 1980 at a political meeting at my undergraduate alma mater, SUNY Stony Brook, my tall, sassy, gorgeous, black classmate, Dahlia Castillo got up to demand more privileges for black students. I stood up and shouted at her that blacks already received more financial aid than whites with the identical income. She yelled back: “Lemme talk to this little Jew!”

We continued arguing one-on-one. (Her Spanish name notwithstanding, Dahlia looked and sounded black, but not “ghetto.”)

But today, if you’re white—or “white enough”—you can’t talk with most blacks about the weather.

One day in 1998, I spent my bus ride home from work conversing with a middle-aged black woman who taught Special Ed in (black) Far Rockaway, where I had recently lived.

When we reached my Queens neighborhood, she started explaining it to me with great self-assurance, saying it was full of military families who served at the local army base. I wasn’t aware of any military base, but I’d only been living there for a year and change, and maybe she knew something I didn’t.

Soon enough, I determined that there were no military families, and no base.

A few years later, on the same bus, the black driver started talking about the “military base.” I couldn’t take it anymore and told him there wasn’t any base. “It’s a secret,” came his response.

You see, in addition to being experts on race, black folks know all of these secrets that are unknown to whites.

If whites were in charge, this black hypocrisy and irrationality would not be a major problem. But under Jim Snow, blacks and white racial socialists are running things. And so, we get these Orwellian “2 + 2 = 5” lectures every time we turn on the TV, go to work, ride the bus, or go to school.

And if you even look like you’re about to invoke the number four, you get fired from your job, assaulted, your life destroyed, and maybe jailed.

The standard racial fairy tale promoted by blacks and their white Leftist allies: blacks’ only problem is white racism.

Notwithstanding her thuggish demeanor, I don’t know about Jeantel. But Martin was not from the underclass. He was born to married parents. During most of his childhood (i.e., after they split up), both of them worked for a living.

The problem that Martin illustrates: black dysfunction and criminality are not limited to the underclass. (Indeed, the New Century Foundation report The Color of Crime debunked the racial fairy tale that poverty causes crime back in 2005.)

Anytime a white has trouble with blacks today, a “respectable” black lady cannot be far away, supporting the thuggery.

In 1987, I was temping as muscle hefting boxes of books for an educational publisher in lower Manhattan. Someone told me of a rumor claiming I had stolen money from a woman employee’s purse. I confronted the white boss lady, who apologized and confessed that the thief was a black boy who had gotten his job via his aunt—the black head secretary.

But to my knowledge, nothing happened to the thief or his aunt.

In 1994, while I was riding the A train home to black Far Rockaway at 9:30 p.m., a couple of black street urchins about eight years of age sat down next to me and whistled loudly, to make it impossible to read. When I walked away, they followed me to the first car. When I told them to beat it, the whole (black) car started threatening to kill me.

A black woman of about 40 told the boys, “They don’t like when you do something good.” (“Something good” = harassing whites.) I called her a racist, to which she responded, “I’m racist, and I’m proud!”

In May 2010, while shopping in a local Waldbaum’s with my 10-year-old son, I was jumped by a 20-year-old, 220-pound black female from whom I was walking away, who had gone there with her toddler, a girlfriend, and the girlfriend’s child solely for that purpose. (They blocked an aisle with bodies and empty shopping carts, and didn’t even pretend to be shopping.)

Immediately, two “respectable” middle-aged black ladies popped up to lie to the police, saying I had rammed the attacker’s shopping cart. Since I was the one with the bloody scratches, the cops arrested both of us. (All charges were later dropped).

In 2011, I was on a bus with a majority of whites coming home from shopping in Brooklyn, when a black man of about 20 decided to start blasting his radio. I asked him to turn it down. He played dumb, but wised up when a huge off-duty Irish cop bent over him to tell him to turn it off. However, a “respectable” black lady of about 60 sitting opposite him consoled him—as if he had been victimized.

The ultimate “respectable” black lady: 87-year-old Adelaide Sanford, for many years a New York school principal. After she retired, liberal politicians named her to powerful jobs on the New York City Board of Education and the State Board of Regents.

Sanford speaks with pedantic over-enunciation, but she has long embraced black racial violence. Her closest political ally was black supremacist extortionist, kidnapper, and murderer Sonny Carson (1935?-2002). In the early 2000s on the late Gil Noble’s Afrocentric ABC show, Like It is, Sanford condemned the placement of police and metal detectors in city schools as “militarization”—targeting “our most gifted young people,” i.e. weapons-toting teenage thugs.

As Jim Sleeper chronicled in The Closest of Strangers, Sanford systematically ran white teachers out of her school. Sleeper reported she had thousands of booklets printed up and distributed in city schools, at white taxpayers’ expense, claiming that blacks’ “learning styles”  were morally superior to whites.[See Educators Call Regents' Booklet Racist, By Mark A. Uhlig, NYT, October 02, 1987]

The Trayvonistas claim to care about “the child.” But they’re all lying. The community doesn’t care about black kids, or they’d be demanding that authorities dismantle all of the street gang and disarm the thugs who are shooting up black areas and killing black kids. They would be demanding that black parents raise their children to forswear crime, since the failure of black parents to do their job is the cause of the bloodshed. (Did you notice Obama urging that on Friday?)

Stop teaching black kids to violate people, based on the color of their skin, and stop teaching them to violate the law because it’s just “the white man’s law.” It’s that simple.

If Trayvonistas who live in black communities cared about black kids, they would be dropping a dime on the bad guys, instead of saying, “Don’t snitch!” But they apparently have no problem with black kids getting murdered, as long as the murderers are also black. They just blame it all on the Man.

Had those blacks on my A train back in 1994 cared about black kids, they would have demanded the street urchins’ names, and either taken them home, or called child welfare on their parents for child neglect.

Instead, they encouraged them to become racist criminals.

My conclusion: America is in a deeper hole that even we know.