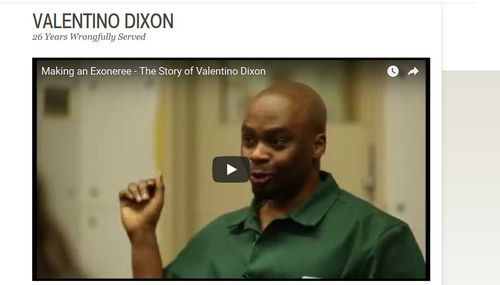 "If it wasn't for my artwork and God, there's no way we'd be having this conversation right now."

I'm in Colorado on a three-way phone call with Valentino Dixon, inmate No. 91B1615 at New York's Wende Correctional Facility, and his 27-year-old daughter, Tina Dixon, a first-grade teacher in Ohio. Faith, family and drawing—golf courses, jazz musicians, landscapes—have kept him alive and sane behind bars. It has been a long, hard roller-coaster ride with "so many ups and downs" that he has learned to manage expectations while holding on to hope.

Tina was a four-month-old infant when her father was convicted of second-degree murder. That's "26 lost summer vacations, 26 missed birthdays, 26 years of life," she recounted earlier this year at an event I attended at Georgetown University's Prisons and Justice Initiative class on wrongful convictions.

"I watched him for years studying the case in front of me over trailer visits, showing me all the facts, putting this puzzle together."

At Attica, the notorious supermax prison where Valentino Dixon spent all but the last eight months of his 33-years-to-life sentence before being transferred to Wende, Tina tells me:

"I would eat pancakes and bacon, have water fights and coloring contests with my dad" during family reunion visits on the honor block while listening "to him and my grandmother and my aunt going over the trial transcripts and educating me about injustice."

About six years into his sentence, Dixon started reading every book he could get his hands on—from criminal justice texts to Viktor Frankl's Man's Search for Meaning to Donald Trump's Art of the Deal. He is self-taught in art, business, law and survival. Dixon has been a model prisoner, mentoring other inmates ("I'm like Dr. Phil for these guys," he chuckles) and earning international interest for his online art gallery. He's never been to a golf course, but Attica's former warden sparked Dixon's imagination by bringing him a photo of Augusta National's 12th hole.

Lots of convicts will tell you they didn't do it. But Dixon has steadfastly maintained his innocence in the street corner shooting that led to the death of Torriano Jackson and wounding of three others. And here's the kicker:

There is someone else who has repeatedly said Dixon didn't commit the crime—because he did it.

Lamarr Scott first confessed to killing Torriano Jackson just days after the 1991 shooting during a Buffalo TV news broadcast. In 2012, Scott stated publicly of prosecutors who he says threatened him: "Each and every day it eats away at me that I allowed them to convince me to do the wrong thing."

No forensic evidence, no physical evidence and no murder weapon tied Dixon to the crime. Multiple witnesses gave sworn statements that Dixon was not the shooter; others gave physical descriptions that matched the six-foot-tall, heavy-set Scott, not the five-foot-seven, 130-pound Dixon. Two witnesses who adamantly insisted Dixon didn't do it were charged with perjury by the prosecutor before Dixon's trial.

Instead of objecting to the government's strong-arm intimidation tactics, Dixon's own public defender (who failed to call a single witness to the stand or enter a single exhibit in his client's defense) obsequiously praised the prosecutor's maneuver as "brilliant."

"Lawyers throw cases all the time," Dixon sighs. As I've delved more into wrongful convictions over the past two years, this sickening pattern repeats itself endlessly in blue states and red ones, across racial and socioeconomic lines: ineffective counsel, faulty eyewitness testimony, shady deal-making and decades of legal wrangling to undo the damage and uncover the truth.

Dixon makes no excuses for his rough past when he got caught up in drugs in his youth: "I'm no angel." But he and a growing army of supporters say he's no killer.

New York lawyer Marty Tankleff is an extraordinary exoneree who was wrongfully convicted of murdering his parents at 17 based on a coerced confession, corrupt police detective and prosecutorial misconduct. Tankleff co-teaches the Georgetown class whose students investigated Dixon's case last semester. As a result of new evidence of prosecutorial misconduct they helped uncover, a new "440 motion" was filed on Dixon's behalf in May.

The prosecutor, Christopher Belling, revealed to the students for the first time in nearly three decades that Dixon's clothing had been tested for gunshot residue and came up negative—facts he failed to disclose to the defense or reveal at trial while accusing Dixon of shooting at least 27 rounds from a 9mm handgun.

"If his case is given a fair and independent review, everyone is confident that he will be granted post conviction relief," Tankleff told me Monday.

The motion is in the hands of Erie County District Attorney John Flynn, whose office told me this week that a decision may be issued by mid-August. Could this be the light at the end of the torturous tunnel? Dixon and his family have been here before, through endless appeals, waiting for a favorable ruling, hanging on to prayer, hope and each other.

"I have a strong faith. I definitely trust in God's plan," Dixon says during our hour-long talk. "This is a test from Him. I know I've got truth on my side. And truth always wins."