Nixonism Is Not Enough—Trump Must ATTACK. How About Anchor Babies NO, Afrikaner Refugees YES?

The battle is won. But the war is just beginning. Let’s hope President-elect Donald Trump knows what he’s in for.

Reportedly, Donald Trump is already disappointing some of his followers by appointing villainous gnome Reince Priebus as his White House Chief of Staff. Republican National Committee Chairblob Priebus is the consummate Republican insider, an immigration wimp and hardly the kind of revolutionary figure many of Trump’s grassroots supporters were hoping for. Priebus also cucked out during the faux Khizr Khan debacle, attacking Trump for supposedly going after an “off-limits” family [RNC chief rebukes Trump: Khans ‘should be off limits,’, by Nolan McCaskill, Politico, August 1, 2016]

But this doesn’t mean everyone should give into despair—yet. The charitable reading: Priebus did, after all, help quell repeated efforts at rebellion from within the Republican Party, especially at the GOP Convention. It’s also fair to assume Priebus, whose political base is Wisconsin, had quite a bit to do with helping ensure Trump’s shocking victory in that state and with bringing out Governor Scott Walker to support Trump openly near the end of the campaign.

If we know anything about Donald Trump, we know that he values loyalty. And whatever his initial sins and failures of nerve, Priebus has been loyal ever since Trump won the GOP nomination. 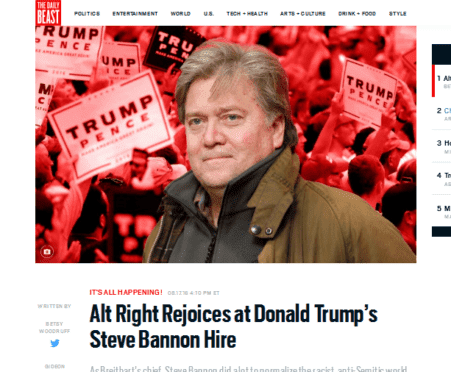 The White House Chief of Staff controls access to the President. Many National Conservatives were hoping Steve Bannon, the current leader of Breitbart.com, would be appointed to the position. However, Bannon will instead be “Chief Strategist and Senior Counselor to the President” [Trump names Priebus as chief of staff, Bannon as chief strategist, by Marc Caputo, Nolan McCaskill, and Alex Isenstadt, Politico, November 13, 2016].

Bannon of course has an independent political base and a media empire which he can use to put pressure on those who don’t go along with his policy agenda. Already, Speaker Paul Ryan has been put on notice. Trump may be drafting the GOP Establishment he once warred against to shepherd through policies deriving from, if not the Alt Right, at least the Alt Lite.

But Trump’s path to success is narrow. The real danger: Donald Trump may turn out to be another President Nixon. Like President-elect Trump, Nixon won by targeting the Main Stream Media and mobilizing the Silent Majority. Like Trump, Nixon had no patience with Political Correctness and expressed in private views about race, Leftist extremism, and even Jewish influence which would no doubt startle the new President-elect. And, like Trump, Nixon was the favorite enemy of campus protesters who regarded him as the symbol of an entire social order that progressives wanted to overthrow.

To this day, even on the Alt Right, Nixon serves as a symbol of defiance to Political Correctness. But Nixon’s actual legacy is Title IX, the EPA, and anti-white racial preferences (i.e. Affirmative Action).

The Main Stream Media and the activist Left (where distinguishable) have already made it clear that they will be working to destroy President-elect Trump and his government from Day One. Trump will be facing furious, sustained opposition from both the top (the elite media) and the bottom (street protesters). Any efforts by GOP insiders like Priebus to “compromise” with such forces will only lead to disaster.

After all, in future elections Trump will no longer be able to claim the fuzzy mantle of “change”. We can also expect he will be criticized for retaining some insiders (like Priebus) when he promised to “drain the swamp,” even though such compromises are inevitable.

Trump’s shocking victory overshadowed the relatively swift loss of Colorado and Nevada Tuesday night, and Trump’s margins in Wisconsin, Michigan, and Pennsylvania were too narrow to be relied on in 2020. As we already see, the Left is going to be going nuts for four years. “Bush Derangement Syndrome” is going to seem like nothing.

What can Trump do? The new President must quickly move to shift both the Overton Window and the underlying dynamics of political power. He has to be constantly on the offensive, not giving his enemies (and they are enemies) a moment’s rest.

This will involve attacking on several fronts. But most importantly, it means taking strong action on immigration and showing no weakness. Thus far, signs are promising and Trump has earned at least a modicum of trust.

Some MSM reports are already trying to gaslight Trump supporters into saying he’s betraying them. Chief among them is a report that Trump is backing down from a wall to a “fence” in certain areas [Trump says ‘certain areas’ of border wall with Mexico could be fence, Reuters, November 13, 2016].

This isn’t really true. What matters is that the border barrier is effective. Obviously, it may take different forms in different places. With appointees like Kris Kobach, Lou Barletta and Jeff Sessions on the transition team, Trump supporters should be confident we’re going to see the wall.

Trump has also said he will begin immediate deportations of “criminal” aliens. While he has also said some illegal aliens will be permitted to stay behind, that is a battle for another day. [President-elect Trump says how many immigrants he’ll deport, by Emily Schultheis, CBS, November 13, 2016] Deportations right off the bat are a good start.

But this isn’t enough. Trump needs to not just keep his campaign promises but put his enemies off balance. So here’s a quick checklist for Steve Bannon and President-elect Trump to consider:

The MSM’s narrative about “mass deportation” was always a red herring. A “deportation force” would be great, but really, it already exists. What’s more important is furthering self-deportation through the kinds of policies we’ve exhaustively documented here at VDARE.com, including mandatory E-Verify, workplace raids, and enforcing laws against hiring illegals. 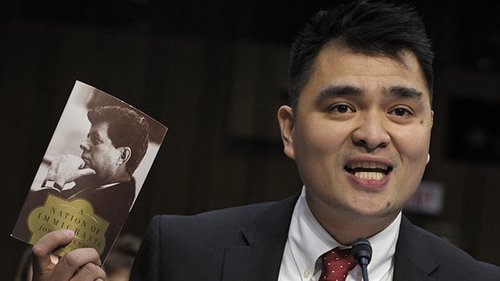 But at least some deportations are necessary. President Trump needs to tell immigration authorities to deport those arrogant illegals who are appearing on television, speaking at political conventions and even appearing before Congress on Day One.

At the top of the list: Jose Antonio Vargas, an occupier who has spent his entire life trying to deconstruct our nation and identity. No muss, no fuss, no press conference. “Out, out, out!”

The rest will get the message. 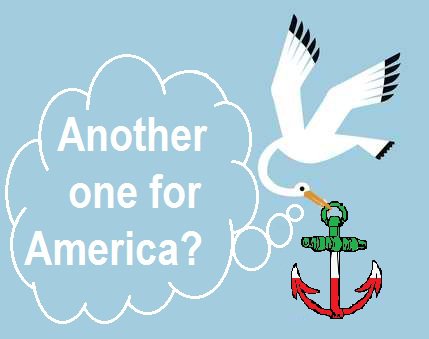 Closing the Anchor Baby loophole is the single most important policy change that need to be implemented if America is to be saved. All enforcement mechanisms, even deporting all illegals, are simply delaying the inevitable unless the lie of birthright citizenship is abolished. Both Trump and Vice-President-elect Mike Pence have advocated the abolition of birthright citizenship in the past. However, there was disturbingly little mention of this near the end of the campaign.

According to an analysis by the Daily Caller, there will be another seven million eligible voters because of birthright citizenship by 2032. This will be enough to wipe out the Trump Coalition unless it is headed off right away. [6.8 million: How Birthright Citizenship Is Changing US Elections, by Justin Caruso, November 5, 2016] Trump must act quickly and also ensure any justices appointed to the Supreme Court will correctly interpret the 14th Amendment in regard to this issue.

After initially wobbling, Trump has been solid in opposing the importation of Muslim refugees to the United States. However, even this is ultimately a defensive action—the providing against “preventable evils” that Enoch Powell said was “the supreme function of statesmanship” in his great 1968 immigration speech.

But it’s time to take the offensive. At CPAC in 2013, Donald Trump spoke about accepting high-skilled immigration from European nations. He should now announce the United States is willing to accept only refugees of European descent from a once-Western nation, South Africa. After all, who can say that Afrikaners are not being oppressed by their government, are not at risk for violence, or being discriminated against on a massive scale?

This would send a powerful symbolic message. And, at the very least, we might end up with the abolition of the “refugee” racket—which is just an expedited, subsidized special immigration program for politically-favored groups that makes no sense morally or politically.

Each of these policies contains risk. But power is fleeting and this opportunity will never come again.

It is no exaggeration to say what is at stake is whether the United States of America will continue as a First World country. A defensive strategy will lead to another Nixon Administration. Compromise with declared enemies is a non-starter. Trump has no choice but to go on the attack.

Peace was never an option.