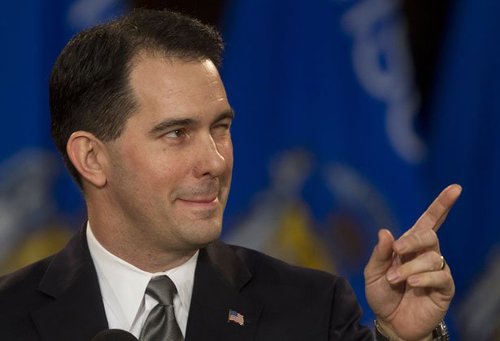 Scott Walker knows where the momentum is

The Beltway Right is engaged in a systematic effort to drive out not just Donald Trump, but immigration patriots out of the GOP. But this effort is unlikely to be successful when other Republican politicians, who know they actually have to attract voters to win office, start copying Trump's positions.

Scott Walker is not a newcomer to all of this. Granted, his immigration positions in the past leave much to be desired. But he forthrightly claims he has changed his mind and has even spoken out against LEGAL immigration. He's been quiet on the issue in recent weeks, but now that frontrunner Donald Trump has released his detailed immigration plan, Walker knows where the political winds are blowing.

“Earlier in the year, I was on ‘Fox News Sunday’ and laid out what I thought we should do, which is secure the border, which means build the wall, have the technology, have the personnel to make sure it’s safe and secure,” he said, building on remarks he made in March.

Walker also said he wanted to end birthright citizenship, echoing Trump’s immigration platform. Trump called for America to stop automatically granting U.S. citizenship to any child whose mother manages to break into the country and give birth.

Sessions said of the plan, which he consulted with Trump on, “Basically, Shannon, it’s just a mainstream plan to do what politicians have been promising to do for 30 years, and haven’t done. These are things like, you have, end the jobs magnet by not allowing people who are here legally to get jobs. You strengthen border enforcement. You stop the visa overstays. Almost half, maybe more now, of illegal entries into the United States are people who come on visas and overstay. These are things that he talks about in his plan that are bread and butter, basic, and need to be done. And if we do them, we’ll be surprised how dramatically we can reduce the illegality. And in addition to that, we need to create an immigration system that serves the interests of the American people. People are hurting today, wages are down. Jobs are down. So, we’ve got to be concerned about them, and making sure that Americans are given the opportunity to get valuable jobs first.”

[Sessions: Trump plan is doing 'what politicians have been promising' for 30 years, by Ian Hanchett, Breitbart, August 17, 2015]

For years, Republicans have been arguing that "of course" they can be trusted on border security and "of course" they actually want to stop mass immigration. (Remember John McCain saying "build the d*mn fence?")

Yet now that there's an actual plan to do just that, many Conservatism Inc. functionaries are admitting they don't actually want to stop immigration at all and they never did.

Of course, if mass immigration continues, the conservative movement ends, full stop. Incidentally, so does the country. The Beltway Right plan seems to be to simply run out the clock on both conservatism and the United States of America.

But voters aren't going along with it. And neither are some of the leading Republican politicians. The Beltway Right can't disown Walker the same way they can Trump. They can't say Jeff Sessions isn't serious about the issue, that he is being opportunistic, or that he's a Hillary Clinton plant. (Not that Hillary Clinton is going to be relevant in the 2016 election much longer anyway.)

Can Conservatism Inc. win a war against its own base, politicians like Scott Walker who are moving in a patriotic direction, and the Democrats? We'll find out over the next few months.