Even his most stalwart critics have to admit Donald Trump is a masterful troll. So it was nothing short of glorious to see what he said about not backing Speaker of the House Paul Ryan in his Wisconsin primary against populist challenger Paul Nehlen.

Of course, this was an echo of Speaker Ryan’s saying he was “not ready to do that” and “not there right now” when he was asked to endorse Trump after The Donald secured the Republican nomination.

Trump’s strike against the RATs (Republicans Against Trump) is the latest reverberation of the apparently never-ending Main Stream Media-created controversy over immigration lawyer Khizr Khan, whose son was killed serving in the U.S. Army in Iraq.

After Khan attacked Trump at the Democratic National Convention, Trump offered condolences but also fired back, wondering aloud why Khan’s wife simply stood there awkwardly rather than saying anything. This set off an MSM frenzy about how Trump “attacked” the family of a dead American soldier. The implicit Narrative that there is some huge bloc of patriotic 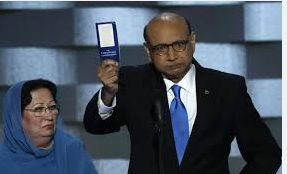 Of course, Trump had nothing whatever to do with Captain Khan’s death. Indeed, as his former campaign manager Corey Lewandowski pointed out, if Donald Trump had been president, Khan would still be alive—because America would not have entered the Iraq War. For some reason, this accurate statement was also greeted with more MSM outrage. [Corey Lewandowski berates Muslim dad: ‘Capt Khan would still be alive’ if Trump was president, by David Edwards, Raw Story, August 1, 2016]

Needless to say, there was no similar reaction about Hillary Clinton implicitly calling the families of the victims of the Benghazi attacks liars by giving their families a false story of why their loved ones died. And, in contrast to Trump, Hillary’s incompetence as Secretary of State is arguably the direct reason why Americans died in Benghazi, both because of her disastrous policies which created the environment and because of her specific decisions (or lack thereof) that night.

In fact, the anger against Trump seems mostly motivated by fury he won’t bow his head in shame just because the Main Stream Media tells him to.

As Scott Greer noted acidly at The Daily Caller:

[I]t’s 100 percent certain the mainstream media is an unofficial arm of the Clinton campaign. After a whole week of trying to downplay the Wikileaks DNC scandal and cheering on every moment of the [DNC] convention, they created a top-down outrage story for the sole purpose of shaming Trump and his supporters.

It’s not like elected Republican congresscritters had actually to do much in response to this phony controversy. VP nominee Mike Pence initially panicked, of course, issuing a statement about how Khan was a hero who must be “cherished,” seemingly an implicit criticism of Trump. However, he later calmly swatted away complaints against Trump when they were brought up at a campaign rally by a “military mom” who just so happened served on the Democratic state central committee in Nevada:

In contrast, Ayotte, McCain and Ryan went out of their way to condemn Trump. Ayotte said she was “appalled” that Trump “disparaged” the family [Ayotte, Horn blast Trump’s blast of Khizir, Ghazala Khan, by John DiStaso, WMUR, August 1, 2016]. John McCain trotted out the old line that Trump did not “represent the GOP” and said Trump’s remarks “do not represent the views of our Republican Party, its officers or candidates” [McCain: Trump defamed Khan, does not represent GOP, by Tom LoBiacno, CNN, August 1, 2016].

And Paul Ryan, never missing a chance to preen, issued a statement:

Many Muslim Americans have served valiantly in our military, and made the ultimate sacrifice. Captain Khan was one such example. His sacrifice – and that of Khizr and Ghazala Khan – should always be honored. Period.

And Kelli Ward said in part:

The Khan controversy is a cynical political stunt cooked up by the Clinton Establishment, and, sadly, John McCain has fallen right into it. McCain’s statement today makes clear that he really wants Hillary Clinton in the White House, and his tepid “support” for Trump is only disingenuous pandering”

Significantly, Dr. Ward, a military wife, also slammed Clinton for backing an “unnecessary war” which led to the death of Captain Khan.

If there’s one thing we have learned about Donald Trump, it’s that with him the personal really is political. So he thanked Nehlen publicly on Twitter. It seems likely his own outraged sense of honor is what is driving his non-endorsements.

Trump is a wrecking ball smashing through the Establishment and expanding the Overton Window. No one should have any illusions that he has a fully developed ideology or that he isn’t primarily driven by his own personal ambition. However, contrary to MSM smearing, Trump does a well-defined sense of the national interest when it comes to trade, a record which goes back to the 1980s , and on immigration.  At CPAC in 2013, he talked about ending the de facto discrimination against immigrant from Europe. This got him denounced by TalkingPointsMemo [Trump: Let In More (White) Immigrants, March 15, 2013,] and the head of the Congressional Hispanic Caucus, who called it “racist rhetoric.” He clearly identifies with the American nation-state, which he says he wants to “conserve”—something which cannot be said of a Conservatism Inc. apparatchik like Paul Ryan.

Not for the first time, what Trump has done is dramatically raise the stakes. If Ryan, McCain or both can be successfully primaried, it would show the transformation of the GOP into a nationalist party will last beyond Trump. What’s more, it will show GOP voters are not willing to outsource their sense of morality to Leftist reporters who despise them.

The fact that President Obama picked this day to call on Republican to disown Trump makes the choice clear – Republican voters are either siding with Trump or with Obama and his RAT friends like McCain and Ryan [Republican leaders should withdraw endorsement of Trump, Obama says, by Gregory Korte, USA Today, August 2, 2016].

It’s startling how irrelevant Hillary Clinton already is to this election. It’s really between Donald Trump and the Lying Press. Trump says he’s going to “punch through” the dishonest media.

But in order to defeat the MSM, he first has to defeat the traitors in his own party, who obey the orders of his most stalwart enemies.

Luckily, today, Donald Trump took steps to do just that.