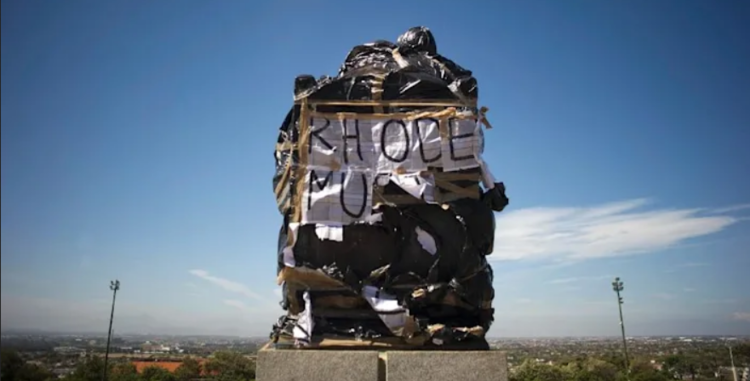 If one one of the more lurid websites on the Right predicted that Africans would begin throwing feces at things they didn't like, I'd be disgusted.  After all, reckless rhetoric, dehumanizing metaphors, frankly abusive language are one of the reasons so many people are reluctant to have a rational and serious debate on the issues of demographics and culture.

But here's today's Can't Make It Up headline.

A bucketload of human excrement flung at a statue has toppled a symbol of British imperialism in South Africa, marking the emergence of a new generation of black protest against white oppression.

The senate of the University of Cape Town (UCT) on Friday bowed to student demands that a brooding bronze statue of colonialist Cecil John Rhodes should be removed from the campus.

UCT, the oldest university in South Africa and regularly ranked as the best on the continent, was built on land donated by Rhodes, a mining magnate who died in 1902.

Many of the students involved in the protests never lived under the injustices of white minority rule, but say they still experience racial discrimination 21 years after the end of apartheid.

The large statue of a notoriously racist Rhodes gazing across an Africa that he coveted for the British empire made them feel alienated on a campus still dominated by white staff, they said.

Obviously, it's great news that South Africa has progressed to the point where they can worry about their "feelings" instead of actual problems.  Of course, the murder rate in South Africa is at an all time high, Boer farms are being systematically exterminated, and even the delivery of basic services like electricity can no longer be taken for granted.  But you don't go to a university to learn about these problems.  You go to a university to learn how to rent seek by blaming old statues for hurting your self-esteem and making it impossible for you to learn math.

It should only be a few short years before the "poo protests" come to American universities.  After all, some college buildings in the South are named after Confederates.  And that's why there's so much poverty, right?