Directly after Donald Trump’s epochal 2016 upset, VDARE.com Editor Peter Brimelow argued that the GOP/GAP (“Generic American Party”) should consolidate its victory by continuing its implicit adoption of the Sailer Strategy and increasing its share of the white vote, which meant breaking into “Greater New England, from Portland, ME to Portland, OR. These are areas that are heavily white, and yet they are still substantially controlled by Democrats.” Trump (or Jared Kushner) didn’t take Brimelow’s advice (remember the “Platinum Plan”?) and consequently lost in 2020, albeit narrowly and controversially. Unfortunately, in 2022, the GOP/GAP in New England itself still hasn’t gotten the message—although at least it’s no longer talking about a Jeb Bush–style Amnesty. But will that be enough?

A Trump supporter (he was the second Governor to endorse Trump in 2016), LePage has spoken frankly about the criminality of blacks and Hispanics. In 2016, he said that “guys with the name D-Money, Smoothie, Shifty” come to Maine to sell dope and knock up young white girls [LePage in spotlight for saying drug dealers impregnate ‘white girls,’ by Randy Billings, Portland Press Herald, January 7, 2016].

How many of those blacks were actually Somali criminals is unknown (or, more accurately, unreported).

Democrat Mills has also not only pledged to provide more support for communities crushed under the burden of “refugees,” but has also claimed “we need the workforce here. We want them to be available for work” [Mills calls for federal immigration reform, pledges to work with cities on asylum seekers, by Kevin Miller, Maine Public, June 2, 2022]. Mills also supports giving illegal aliens the right to vote [Janet Mills’ past support for illegal immigrant voting resurfaces amid debate, Maine Examiner, March 28, 2022].

In contrast, LePage has recently said he would eliminate the eligibility of “asylum seekers” to receive welfare and subsidized housing while they wait for federal work authorization [LePage would seek to cut state support for asylum seekers, by Randy Billings, Portland Press-Herald, June 17, 2022].

But he has yet to publicly oppose mass legal immigration, or appeal to white Mainers fed up with Somali refugees, their expense and their crime, along with other signature issues of concern to white voters, such as Affirmative Action.

And the polls are discouraging. Mills leads him by as many as 14 points, 53 percent to 39, Real Clear Politics reports. 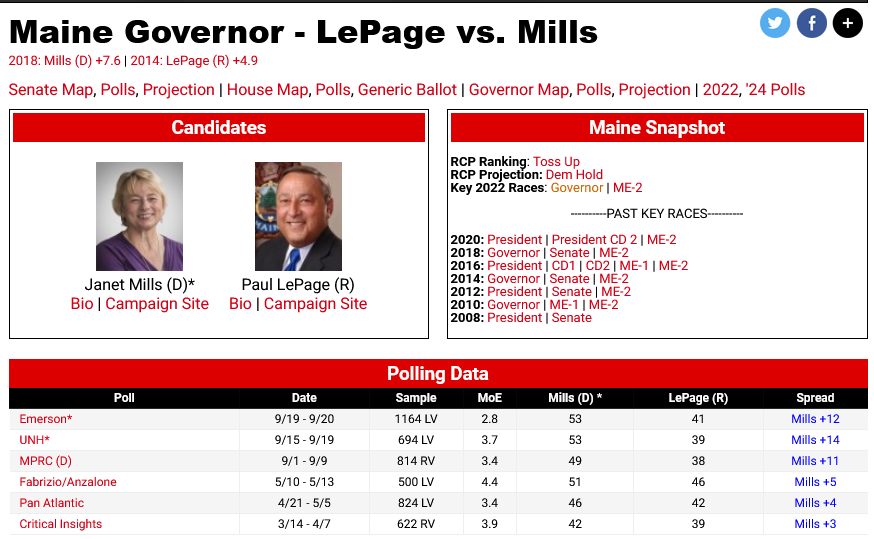 LePage is a tough guy. It is tragic that he of all people has not adopted the Sailer Strategy and campaigned on keeping Maine Maine.

Massachusetts sadly lacks serious immigration patriots running for high offices. The Donald Trump-endorsed GOP gubernatorial candidate, Geoff Diehl, 53, who served seven years in the Massachusetts House, does support a ballot initiative to repeal driver’s licenses for illegals [Geoff Diehl condemns ‘harassment’ of repeal signature collectors for illegal immigrant license law, by Gayla Cawley, Boston Herald, July 22, 2022]. But he has little else to offer on the immigration issue. Indeed, the policy page at his website doesn’t mention it at all.

Early in Diehl’s campaign, his website said he wanted to make naturalization easier. Thankfully, he got rid of that daft idea. The last thing Massachusetts needs is more Third World foreigners voting for Democrats.

Diehl’s Democrat opponent is Maura Healey, a Treason Lobby Attorney General who sued Trump 96 times. One of those lawsuits challenged Trump’s 2019 Emergency Declaration to get funding to improve and build more wall on the southwest border; another fought the “Muslim ban” [Under Maura Healey, the attorney general’s office sued the Trump administration nearly 100 times. Most of the time, she prevailed, by Shelley Murphy, Boston Globe, August 24, 2022]. Incredibly, Diehl’s campaign is not raising this lawfare issue.

But Diehl’s “issues” are standard GOP boilerplate with a heavy dose of policy wonkery, with no direct appeal to the Historic American Nation. 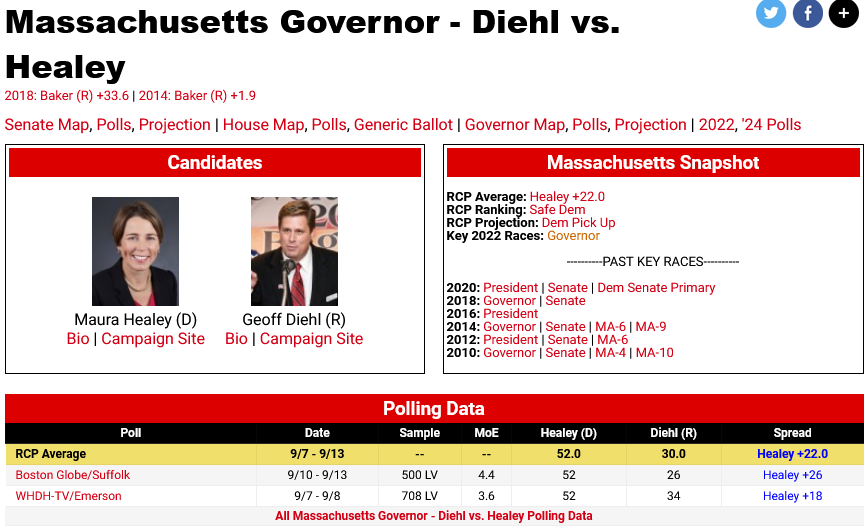 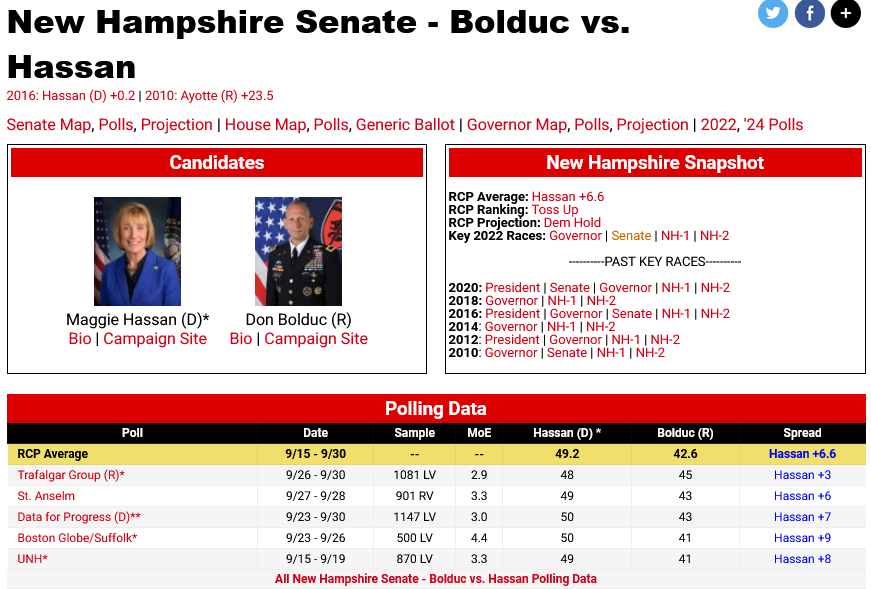 Something that might help Bolduc: An endorsement from POTUS 45 [Trump praises Bolduc on Milley controversy but does not mention his US Senate candidacy, by John DiStaso, WMUR9, September 16, 2022].

Similarly in Vermont, Republican Senate candidate Gerald Malloy, 60, a retired Army major and West Point graduate, won the nomination on a platform that included resistance to illegal immigration. But it said nothing about legal immigration.

“Put up the wall. Enforce the law, stop criminals and Fentanyl from China coming into the US. 10,000 lbs. of Fentanyl seized last year—enough to kill 2 Billion people,” his campaign platform says.

That’s fine as far as it goes, but with the right attack on immigration Malloy could really wound opponent Peter Welch, a Democrat congressman with an F-minus, 1 percent rating from NumbersUSA. Welch voted the wrong way on Amnesty, Chain Migration, Visa Lottery, Unnecessary Worker Visas, and Refugee and Asylum Fraud, scoring 0 percent on four of those five.

Malloy had better make something of that record soon. He trails Welch by 7 points, 50-43.

Connecticut’s U.S. Senate race is no bargain for the Historic American Nation.

Leora Levy, a 65-year-old Cuban-Jewish-Lithuanian immigrant, is a political chameleon who supported Jeb Bush in 2016 and called Donald Trump a “vulgar, ill-mannered” candidate who “disparages those whom he cannot intimidate” [Jeb is the most qualified candidate, Greenwich Times, February 19, 2016]. She came around later and backed Trump. That’s presumably the reason he endorsed her in her primary. She’s running against leftist Democrat incumbent Richard Blumenthal, who famously lied about serving in Vietnam. He’s another Numbers USA F-minus, 0 percenter.

Weirdly in a Connecticut race, Levy appears fixated on Israel and Ukraine, She doesn’t much stress immigration, mentioning it only briefly in a section of her website devoted to fentanyl traffic at the border. She does talk tough on the illegals that have flooded the country since Traitor Joe took office. She would even build a wall “where feasible” [Stop the Scourge of Fentanyl] But like the rest of these New England GOP candidates, she ignores legal immigration and refugee resettlement, both part of the Great Replacement immivasion that the Biden Regime is aiding and abetting on multiple fronts at the southwest border. 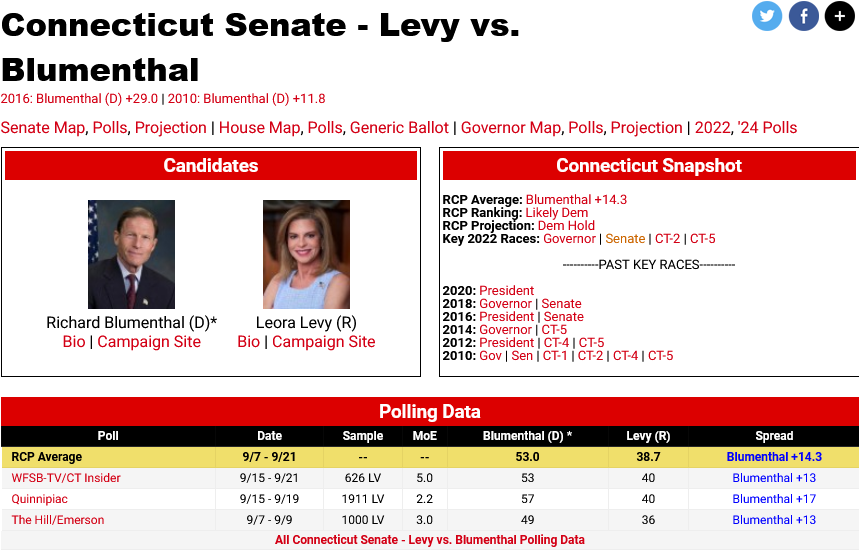 While Fung opposes driver’s licenses for illegals and sanctuary cities, he’s not an immigration patriot and supported the Gang of Eight’s Amnesty [Fung takes aim at undocumented immigrants, by Steve Klamin, WPRO News, October 26, 2018; Mayor Allan Fung Climbs Ladder of Success, by Jennie L. Ilustre, Asian Fortune, October 14, 2013]. His website doesn’t have a separate section on immigration, and indeed, doesn’t mention it at all, except to say “we need to secure the border.” Like Connecticut’s Levy, he shoved that into a section on fentanyl trafficking [Stop the flow of Fentanyl & Human Trafficking Across Our Border].

Of course, Fung—married to Barbara Ann Fenton-Fung, who represents Rhode Island’s 15th District in the state’s House of Representatives—is preferable to Magaziner, who backs driver’s licenses for illegals [Right of ‘Dreamers’ to get driver’s licenses gets House OK, by Katherine Gregg, Providence Journal, April 12, 2018]. If the Republican Party wants to survive the impending demographic winter, it must connect with white voters in places that typically do not vote Republican. Doing so requires educating the public about the downsides of both illegal and legal immigration. Otherwise, anti-white Democrats will permanently control the country in our lifetimes.