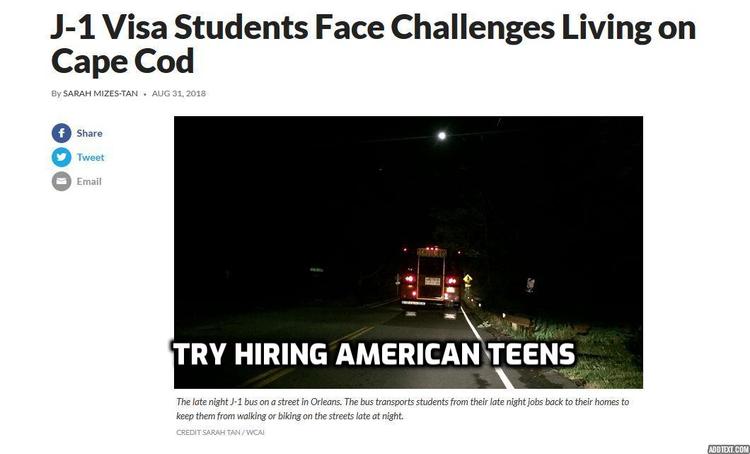 Summer officially starts next week, on July 21. But it won’t be warming American teenagers, increasingly shut out of summer jobs by foreigners imported on temporary work permits. Thus through at least the early 1990s, businesses would bus in teenagers from southeastern Massachusetts cities like New Bedford and Fall River to work in Cape Cod vacation area. But vigorous lobbying has enabled businesses to switch to foreigners. Wages stagnated and young adult labor force participation remained low, but at least Cape Cod businesses have their seasonal underclass of foreign workers! My Make Massachusetts Great Again proposal: compel these businesses to switch back to hiring Americans.

The key seasonal labor permits are the H-2B program, which brings in low-skill workers, 80 percent of whom hail from Mexico, and the J-1 program, which brings in swaths of eastern European college students. H2-B in particular has received pushback from labor unions and left-leaning think tanks, most notably the AFL-CIO and Economic Policy Institute.

The AFL-CIO notes the search for domestic workers is oftentimes insincere and jobs employers wish to fill with foreign labor are not offered for the typical rate—businesses reportedly can save nearly 25 percent by hiring foreigners.[Fact Sheet on Why the H-2B Program is Bad for Working People, AFL-CIO.org, June 23, 2016] Meanwhile EPI points out the real wages for H-2B workers dropped from 2004 to 2014 in fields like landscaping (3.4 percent), meat/fish trimming (3.3 percent) and restaurant cooks (6.5 percent), among other occupations. [The H-2B temporary foreign worker program | Examining the effects on Americans’ job opportunities and wages, by Daniel Costa, June 8, 2016]

Basic supply and demand rules dictate that a labor shortage would benefit workers, and a delay in H-2B visas on Cape Cod in 2016 proved it. Desperate for workers, landscaping companies began offering prospective employees more money. Experienced landscapers could earn salaries in the $60,000 to $80,000 range annually with benefits, according to the Cape Cod Times. [Cape landscapers in the weeds, by Lorelei Stevens, May 22, 2016]

Perhaps this labor scarcity is what the region needs to entice young people to stay. According to CapeCod.com, the area's 25-year-old to 44-year-old population declined by 26 percent from 2000 to 2010. The top two reasons cited: the high cost of housing and the inability to find jobs that pay a living wage. [Making It On Cape Cod: Why Do A Quarter Of Our Kids Leave? April 14, 2016]

Meanwhile, according to the Center For Immigration Studies, high school dropouts over the age of 25 in Massachusetts had a mere 41.53% labor force participation rate. [Maps: Impact of H-2B Guest Workers in 2017, by Preston Huennekens and Bryan Griffith on April 2, 2018] Zero Hedge reported the national average for high school dropouts that same year was around 45 to 46.5 percent. [College Grads Vs High School Dropouts: A Disturbing Observation, November 2, 2018]

And in 2016, the labor force participation rate on Cape Cod, Martha’s Vineyard and Nantucket was well below the statewide average: less than 59 percent compared to the statewide 65.8 percent, according to The Cape & Islands Regional Workforce Blueprint. [PDF, October 2018]

One further incentive for employers: the J-1 workers are another class of labor who will work in astonishingly terrible conditions, undercutting the American people.

Last year, PBS affiliate WCAI documented some of the issues with the J-1 program including the terrible conditions these foreign students face on the Cape. It reported there were J-1 workers who worked more than 14-hour days seven days per week, taking upwards of three jobs each during their three-to-four month stays. One instance had 11 students staying in a three-bedroom house; another had students staying in an unfinished attic. [ J-1 Visa Students Face Challenges Living on Cape Cod, by Sarah Mizes-Tan, August 31, 2018]

During the 2016 fiscal year, the Department of State spent $590.9 million on “cultural exchange” programs, including the J-1 visa programs. How exactly sweatshop labor constitutes a “cultural exchange” is unclear. That is money that could be going to helping young domestic workers instead of taking jobs away from them.

It very much looks like businesses in Cape Cod, Martha’s Vineyard, Nantucket and similar New England vacation spots simply prefer to hire visa labor when looking for people to work during the summer,

For example, Hyannisport Club has a job listing for servers, which requires no experience, from early May to December: prospective employees must to be willing to work any day of the week. Of course, this weeds out American high school and college students who could help during peak travel season during the summer. Instead, it requires workers to be around in November (38.7 percent occupancy), the third-lowest month in terms of Cape Cod tourism of the year, according to the Cape Cod Chamber of Commerce.

Another job listing on LinkedIn for a short order cook at the Steamboat Wharf in Provincetown assures H2-B workers they will receive equal pay and benefits to native-born Americans. However, they are also offered a special perk: transportation to and from their home country as well as visa and border crossing fees paid in full. But this is money that could be used to offer American workers higher pay and incentivize them to work on Cape Cod for the summer.

If these businesses really do need more workers and are not just trying to undercut American workers, then perhaps the solution involves addressing regulations in state. If restaurants need wait staff, servers, and bussers lowering the age of those allowed to serve and pour alcohol in state would be a reasonable start.

The current age to do such in Massachusetts is 18. But neighboring Maine seems to have no issue with 17-year-olds doing the same, and 14-year-olds can bus tables at establishments that serve alcohol there. Lowering the age to at least 16 to wait tables at an establishment that sells alcohol would make more sense.

With the money these businesses use to entice foreign workers to come work for them, they could offer something of value to their own state’s citizens instead. If they can pay the travel costs of their foreign workers, so why can’t they offer a cash bonus of the same amount to the American workers who stick around for the summer?

Say the company spends $1,000 in travel expenses per foreign worker, they could instead give an American worker who sticks with them for the duration of the summer a $1,000 cash bonus upon completion.

Tax incentives for businesses that hire American, as opposed to the 7.79 percent discount offered to those hiring J-1 workers, could work. [Payroll Tax Benefits for Employers, SeasonalStaff.org] The same could be said for penalties for businesses found to be discriminating against American workers in favor of cheap foreign labor. Especially because they are known to overstay their visas and ending up living in the U.S. illegally.

Which brings us to Rosiane Santos, arrested in a Falmouth restaurant last summer for attacking a young man wearing a MAGA hat. 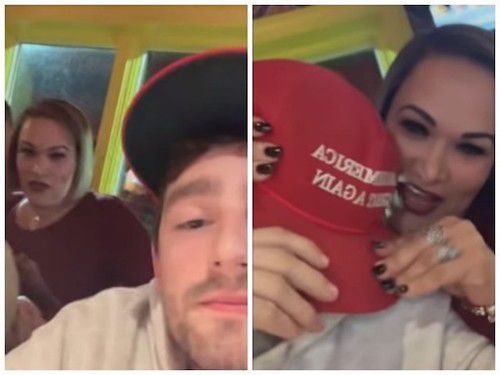 She turned out to be an illegal alien, part of the Brazilian influx to the vacation area, who has been living in the U.S. since overstaying her visa in…1994!

This illegal alien, alas, was definitely not doing a job that Americans won’t do.