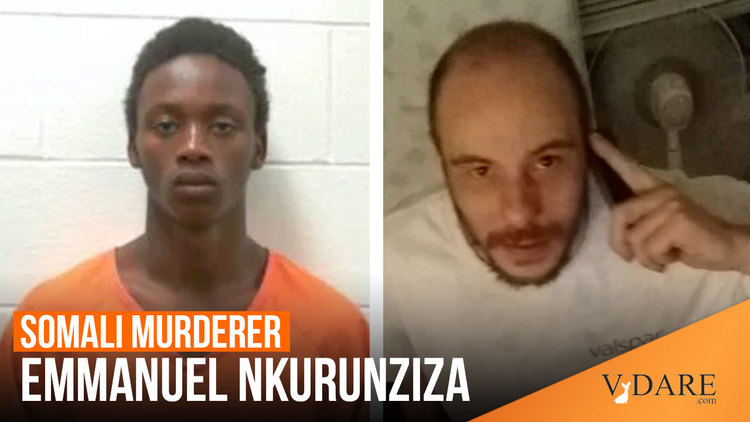 Emmanuel Nkurunziza, who killed 38-year-old Donald Giusti in 2018 in Lewiston, Maine, provides yet another example of what the Somali invasion has done to the once tranquil city and its criminal justice system. Nkurunziza’s story encapsulates what The Great Replacement means for white Americans.

Emmanuel Nkurunziza is scheduled to be sentenced Thursday after pleading no contest to criminal negligence in the death of 38-year-old Donald Giusti. Nkurunziza threw a rock during the 2018 brawl in Lewiston that apparently struck Giusti in the head. https://t.co/NGxgVrd9XN

The then 17-year-old Nkurnziza [sic] and a gang of fellow Somalis attacked a group of whites in the city’s Kennedy Park. Nkurunziza fired a rock at Giusti and hit him in the head. The Africans then did what blacks aways do when they have a wounded victim on the ground. They swarmed Giusti, then kicked and stomped him. He died three days later.

This week, Nkurunziza, now 21, copped an Alford Plea to criminally negligent manslaughter. An Alford Plea does not admit guilt but instead recognizes that prosecutors have enough evidence to convict:

Nkurunziza agreed Tuesday to a 10-year sentence, with all but nine months of that time suspended. …

By having prosecutors remove language referencing “reckless” behavior from the manslaughter charge, Nkurunziza is unlikely to face deportation. … Prosecutors also agreed to dismiss a charge of aggravated assault in the case, as well as a simple assault charge stemming from an altercation while Nkurunziza was incarcerated.

Although he has agreed to serve nine months in jail, Nkurunziza will be credited for the time he served at the Long Creek Youth Development Center in South Portland, as well as short stints at county jails in Auburn and Portland before he was released on bail with an electronic monitor.

Nkurunziza “agreed” to jail time? That was mighty white of him. And by the way, he did not receive a “10-year sentence,” whatever the plea says on paper.

Of course, Sun-Journal scribe Williams called Nkurunziza a “Lewiston man,” and amusingly, twice claimed the rock only “apparently” struck Giusti. Prosecutors had video evidence that Nkurunziza was the killer. There was no “apparently” about it.

In 2020, prosecutors sought to end Nkurunziza’s bail because he ducked three appointments with his bail supervisor. The judge had permitted Nkurunziza to move to another city and attend a public school there [Bail in question for teen charged in Lewiston slaying, by Christopher Williams, Sun-Journal, March 3, 2020].

Somali thugs frequently attack people in Kennedy Park [Video from Maine: Muslim migrant youth attack park goers in Lewiston, by Robert Spencer, Jihad Watch, May 25, 2018]. That aside, it’s a cliché by now to ask what would have happened to Giusti if he had thrown the rock and Nkurunziza had died.

We know. Just ask the whites who defended themselves against Ahmaud Arbery.