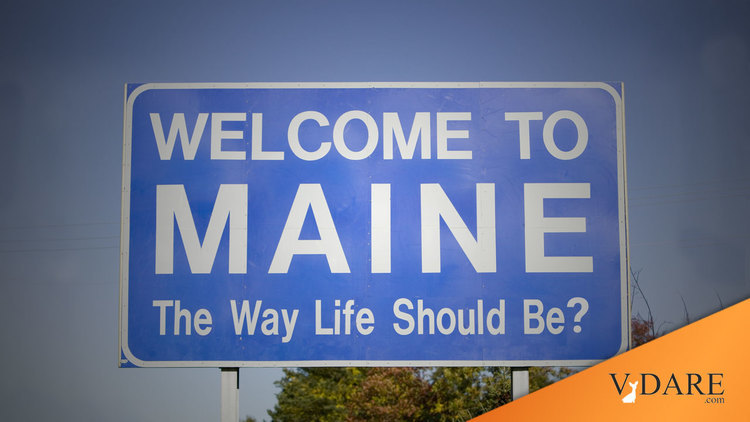 The African tsunami that has been rolling into Portland, Maine, has finally swamped the 84-percent white city. It cannot accept any more of Biden's Great Replacers.

The crisis, Andrew Arthur of the Center for Immigration Studies, is revealed in the Federal Emergency Management Agency request for another $24 million in emergency food relief on top of $150 million already allocated for “migrants” at the expense of Americans [The Migrant Crisis — in Portland, Maine, September 5, 2022]. The request mentions Portland.

Surprisingly, there is a migrant crisis in Portland, Maine. The locals are compassionate, but their ability to continue housing and providing for illegal entrants is in serious doubt.https://t.co/JbNx4Z8OMt

In May, the city’s welfare director, Kristen Dow, told federal immigration authorities, who have released more than 1 million “migrants” since Brandon took office, that the city can’t handle any more illegals. “We have been over capacity in our shelter for quite some time and have now reached the point where the hotels we have been utilizing are also full,” Dow wrote in an email [Portland asks for others to step up, no longer guarantees shelter upon arrival for asylum seekers, David Guildford, NewsCenterMaine.com, May 6, 2022].

In July, the Christian Science Monitor offered one reason for the African invasion, CIS’s Arthur noted. The city’s “success” in accepting 450 Africans a few years ago “helped bring the current wave from Africa”:

In the cellphone age, immigrants and refugees plumb the internet and contact earlier migrants through WhatsApp. If they make it across the U.S. border, many ask to go to Portland because they’ve heard other Africans are there.

The centerpiece of the CSM’s lachrymose tale was a Haitian woman who dragged a terrified 4-year-old through six countries without applying for asylum in any of them.

In other words, it wasn’t just cell phones and social media that helped swamp the city. It was the man who said MAGA patriots are more dangerous than his Great Replacers.

Like many places in this country, Portland was forged by immigrants. The first here were native Algonquian-speaking people from Asia who moved in as the glaciers melted 14,000 years ago. Much later came European explorers; French trappers from Canada; settlers from England, Ireland, and France; and some enslaved people brought from Africa. Textile mills and fishing brought Italians, and granite quarries brought Finns.

Of course, Struck forgot to mention that those immigrants were high IQ, self-sufficient whites, not low IQ, freeloading blacks who need free food and housing.

As for Portland’s welfare system being overwhelmed, it’s not the surprise Arthur says it is. Here’s a headline from January: City of Portland, social services organizations overwhelmed by surging number of asylum seekers.

Indeed, what has occurred was predictable.

#StretchedThin The City of Portland and social services agencies say they're overwhelmed by the growing number of Asylum Seekers arriving in the city. Right now, @CityPortland is housing 727 Asylum Seekers. That's about 200+ more than when the Portland Expo was used in 2019