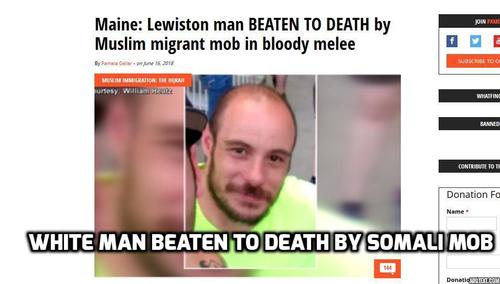 I got this story from Pamela Geller's web page. Ms. Geller very keen on fighting Muslims, and she deserves credit for pointing out this story, but I would not have headed it, as she has "Maine: Lewiston man BEATEN TO DEATH by Muslim migrant mob in bloody melee" [By Pamela Geller, Geller Report, June 16, 2018]

I prefer the formulation "White Man Beaten To Death By Somali Mob". I mention this, because Ms. includes a note saying "Islam is not a race " after this quote. (Emphasis hers.)

Asked whether race played a role in Tuesday’s altercation, St. Pierre said: “There were certainly different ethnic origins involved in the fight. I don’t know exactly how many. We get reports or I’ve seen on social media and other outlets that people are saying there are as many as 30 or 40 people from different ethnic backgrounds. I don’t know that to be accurate.”

The police investigation will help determine who was involved and why, he said. But the participants don’t appear to be the same individuals each time nor the same groups of people.

“We’re still working strongly in concert with the Maine State Police,” which is leading the investigation, he said. Detectives from the two agencies are working together to seek out and interview “as many witnesses as possible at this point,” he said

I think if the town of Lewiston, Maine was under occupation by Africans from some primitive Christian country, they would be just as likely to beat white people to death as Somalis are.

We've been publishing items about Lewiston, on and off, for more than fifteen years--which means that that the youths who beat this white American to death may be native-born Americans themselves, like Omar Mateen.

Abolishing New England: In Lewiston, Maine, They Had a Dream, Too…

The blessings of diversity have descended upon the small city of Lewiston, Maine, a decaying mill town of some 35,000 folks, who were mainly white until a couple of years ago. Now, with the addition of nearly 2,000 Somalis, Lewiston has begun to catch up with what's been happening in the rest of the country—and Western Europe, and Australia, and New Zealand, for that matter. Like most of the people in those places, those in Lewiston don't much care for it. [More]

And here's me, during Trump's run for the Presidency:

The Fulford File: The Somali Catastrophe, Donald Trump, And The Lying Press

Recently, a Somali in London went crazy, stabbing five people, one of whom, an American woman, died. The police, as often happens, were quick to say that this wasn’t jihad, or terror, or a “hate crime,” but just some form of mental illness. They were lying, of course—he was provably motivated by Islam— but this was an unusually credible lie. It doesn’t take an international conspiracy or a Finsbury Park “preacher of hate” to make a Somali stab five people—that’s just what Somalis do. They’re always stabbing people, mostly each other. That’s one of the many reasons Somali immigration is a bad idea.

Speaking in Maine, which has suffered horribly from Somali refugee resettlement, Donald Trump pointed this out:

Trump Says US Must Close Its Doors to Somali Refugees

The Main Stream Media, as always happens, went crazy on him—posted not only condemnations of Trump—par for the course—but defenses of Somali immigration.[More]

And here's one of the defenses (emphases added):

Mr. Trump can relax. We know who they are. They are our neighbors and our friends. Some of them work in our schools and hospitals. Some are students. Some own businesses. They pay taxes, which are used for, among other things, maintaining the stage from which he spoke.

Our View: When Trump slurs Somalis, he insults Portland| A presidential campaign that thrives on dividing people came to a city that strives to be united.

By The Editorial Board, Portland Press-Herald, August 5, 2016