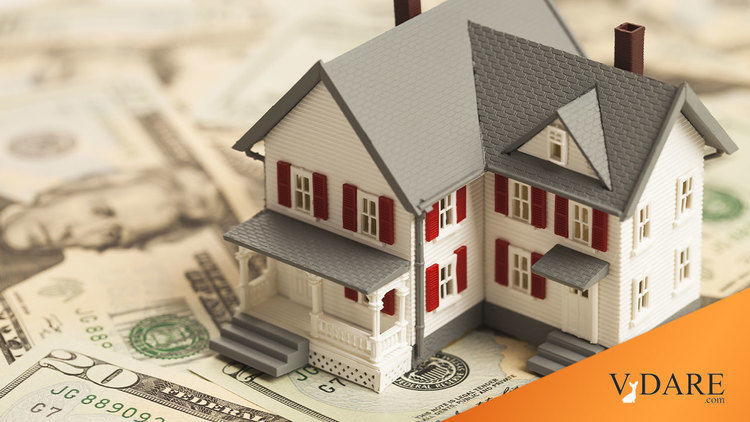 The Latest Immigration Idiocy—Buy A House, Get A Visa

And, of course, it is from Comrade Chuck Schumer. This one is to give a visa to any alien who will buy a house in the U.S. Not mentioned is that any alien who could afford to buy a house in the U.S. probably can already get a visitor's visa. Prominently mentioned are Canadians who are apparently snapping up houses here. Also not mentioned is that Canadians don't need visas to enter the U.S. and they can stay six months a year.

The reeling housing market has come to this: To shore it up, two Senators are preparing to introduce a bipartisan bill Thursday that would give residence visas to foreigners who spend at least $500,000 to buy houses in the U.S.

The provision is part of a larger package of immigration measures, co-authored by Sens. Charles Schumer (D., N.Y.) and Mike Lee (R., Utah), designed to spur more foreign investment in the U.S.

Supporters of the bill, co-authored by Sen. Charles Schumer, say it would help make up for American buyers who are holding back.

Foreigners have accounted for a growing share of home purchases in South Florida, Southern California, Arizona and other hard-hit markets. Chinese and Canadian buyers, among others, are taking advantage not only of big declines in U.S. home prices and reduced competition from Americans but also of favorable foreign exchange rates.

To fuel this demand, the proposed measure would offer visas to any foreigner making a cash investment of at least $500,000 on residential real-estate—a single-family house, condo or townhouse. Applicants can spend the entire amount on one house or spend as little as $250,000 on a residence and invest the rest in other residential real estate, which can be rented out.

The measure would complement existing visa programs that allow foreigners to enter the U.S. if they invest in new businesses that create jobs. Backers believe the initiative would help soak up an excess supply of inventory when many would-be American home buyers are holding back because they're concerned about their jobs or because they would have to take a big loss to sell their current house.

"This is a way to create more demand without costing the federal government a nickel," Sen. Schumer said in an interview.

International buyers accounted for around $82 billion in U.S. residential real-estate sales for the year ending in March, up from $66 billion during the previous year period, according to data from the National Association of Realtors. Foreign buyers accounted for at least 5.5% of all home sales in Miami and 4.3% of Phoenix home sales during the month of July, according to MDA DataQuick.

The provision would create visas that are separate from current programs so as to not displace anyone waiting for other visas. There would be no cap on the home-buyer visa program.

Over the past year, Canadians accounted for one quarter of foreign home buyers, and buyers from China, Mexico, Great Britain, and India accounted for another quarter, according to the National Association of Realtors. For buyers from some countries, restrictive immigration rules are "a deterrent to purchase here, for sure," says Sally Daley, a real-estate agent in Vero Beach, Fla. She estimates that around one-third of her sales this year have gone to foreigners, an all-time high.

"Without them, we would be stagnant," says Ms. Daley. "They're hiring contractors, buying furniture, and they're also helping the market correct by getting inventory whittled down."

In March, Harry Morrison, a Canadian from Lakefield, Ontario, bought a four-bedroom vacation home in a gated community in Vero Beach. "House prices were going down, and the exchange rate was quite favorable," said Mr. Morrison, who first bought a home there from Ms. Daley four years ago.

While a special visa would allow Canadian buyers like Mr. Morrison to spend more time in the U.S., he said he isn't sure "what other benefit a visa would give me."

The idea has some high-profile supporters, including Warren Buffett, who this summer floated the idea of encouraging more "rich immigrants" to buy homes. "If you wanted to change your immigration policy so that you let 500,000 families in but they have to have a significant net worth and everything, you'd solve things very quickly," Mr. Buffett said in an August interview with PBS's Charlie Rose.

The measure could also help turn around buyer psychology, said mortgage-bond pioneer Lewis Ranieri. He said the program represented "triage" for a housing market that needs more fixes, even modest ones.

But other industry executives greeted the proposal with skepticism. Foreign buyers "don't need an incentive" to buy homes, said Richard Smith, chief executive of Realogy Corp., which owns the Coldwell Banker and Century 21 real-estate brands. "We have a lot of Americans who are willing to buy. We just have to fix the economy."

The measure may have a more targeted effect in exclusive markets like San Marino, Calif., that have become popular with foreigners. Easier immigration rules could be "tremendous" because of the difficulty many Chinese buyers have in obtaining visas, says Maggie Navarro, a local real-estate agent.

Ms. Navarro recently sold a home for $1.67 million, around 8% above the asking price, to a Chinese national who works in the mining industry. She says nearly every listing she's put on the market in San Marino "has had at least one full price cash offer from a buyer from mainland China."

Apparently the visa will not include work authorization, so this new visa is nothing more than a standard B-2 Visitor's Visa. So, the length of stay is limited and there is no work authorization. What is the point of this visa? As before, someone who has $500k in cash is the same type of alien who qualifies for a B-2 visa. And there are not now nor were there ever any restrictions on the B-2 visa that prohibits an alien from purchasing real property. This is a non-solution for a problem that does not exist. Aliens can already purchase and do purchase property. And though aliens are purchasing property, they really can't impact the millions of homes in foreclosure.

This idiocy is just more evidence that United States Senators know nothing about what our immigration laws currently are. They really are ignorant fools.