"Shock Study"—CIS, DRUDGE, And NRO Repeat What VDARE.com Has Been Saying For Years 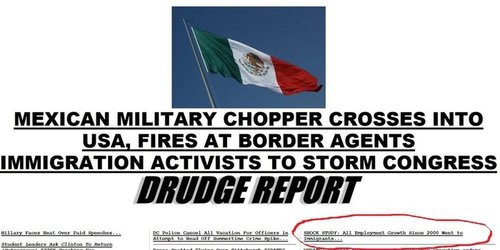 Matt Drudge, who has been doing yeoman work linking to all the good immigration stories that are NOT appearing on the New York Times, has an interesting link his front page on what we at VDARE.com refer to as American Worker Displacement.

That's what Ed Rubenstein has written up in our VDARE.com American Worker Displacement Index (VDAWDI) every month since November 2004.

SHOCK STUDY: All Employment Growth Since 2000 Went to Immigrants...

The link goes to a National Review Online post in the Corner blog, saying

According to a major new report from the Center for Immigration Studies (CIS), net employment growth in the United States since 2000 has gone entirely to immigrants, legal and illegal. Using data from the Bureau of Labor Statistics, CIS scholars Steven A. Camarota and Karen Zeigler found that there were 127,000 fewer working-age natives holding a job in the first quarter of 2014 than in 2000, while the number of immigrants with a job was 5.7 million above the 2000 level.

The rapidity with which immigrants recovered from the Great Recession, as well as the fact that they held a disproportionate share of jobs relative to their share of population growth before the recession, help to explain their findings, the authors report. In addition, native-born Americans and immigrants were affected differently by the recession.

All Employment Growth Since 2000 Went to Immigrants Number of U.S. Born Not Working Grew by 17 Million By Steven A. Camarota and Karen Zeigler, June 2014

In spite of the fact that all NRO is doing is dumping a CIS press release and link to a PDF, they have over 600 comments, one of which I reproduce below:

Vdare.com, the best site for immigration discussion, has been saying this since, oh, 2000.

The purpose of mass immigration is to import a new population, in order to depress wages/salaries and also to have a new market of people to sell stuff to.

And for political reasons, importing a new population, creates many opportunities for politicians to run for office and get re-elected over and over. Poor people (immigrants) can easily be convinced of having a need for more social spending (subsidies) which is a great way Pols use to win (buy) votes.

Make everything in life a "right" and make it mandatory (subsidized by taxpayers) and people will demand their "rights" (subsidies) 24/7/365.

Very true. I may say that Steven A. Camarota and Karen Zeigler do not mention any work by VDARE.com or Ed Rubenstein in their footnotes.

Okay, they're catching up. The next question is "What else are the MSM and Conservatism, Inc both not reporting that VDARE.com has been reporting for years?"