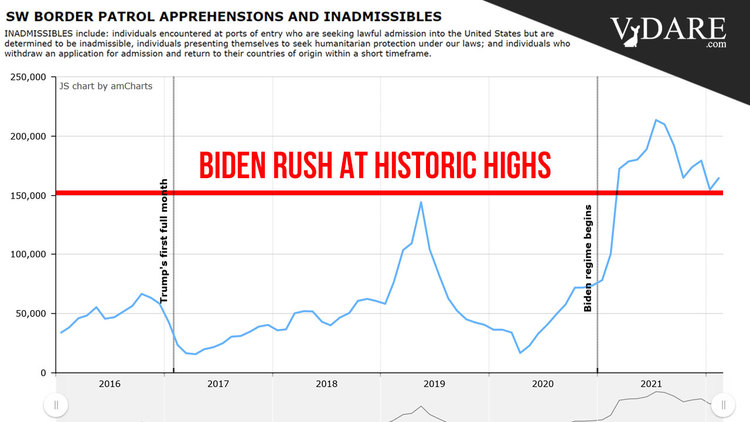 The Biden Rush continues—apprehensions at the southwest border, a proxy for total crossings, tower above anything seen in recent history. This is particularly ominous because immigrant displacement of American workers, which will ultimately be impacted by this influx, also continues at historic highs. And—a new factor since we began following American Worker Displacement in 2004—surging inflation means that American workers face sharply reduced wages in inflation-adjusted terms. All this, it must be said, is in dramatic contrast to the “blue collar boom” that occurred under Donald J. Trump’s presidency. At the very least, the Biden Regime is taking a wild political risk with working-class living standards.

Apprehensions ticked up again on the southwest border in February and were unprecedented in recent history:

Disquieting features of last month’s influx: a sharp increase in single adult Mexicans and in the number of minor children traveling without parents [Mexicans surged as illegal immigration on border rose in February, by Stephen Dinan, Washington Times, March 20, 2022].

The economy added back the most jobs since July 2021 last month, as an already tight labor market gobbled up 678,000 additional workers, according to the widely cited Payroll Survey. The unemployment rate fell to 3.8%, the lowest level since the pandemic hobbled the U.S. economy. All this came despite a pop in the labor force participation rate, to 62.3%, signaling that more people were returning to the workforce… and finding jobs.

Our analysis of the February Household Survey indicates an employment gain of 548,000—about 25% less than growth reported in the Payroll Survey.

The New VDARE American Worker Displacement Index (NVDAWDI), our name for the ratio of the immigrant to native-born employment growth indexes since January 2009, fell to 121.7 from 122.1 in January, a 0.34% decline.

Despite 1.092 million immigrants reported as unemployed in February, the foreign-born working-age population expanded by more than 1 million, year-over-year, for the sixth straight month:

Note carefully what this chart shows. Unlike our other charts, which show absolute values, this one compares each month to the same month of the prior year. So the immigrant workforce population grew by 1.345 million in February 2022 compared to February 2021. The corresponding increases for January and December were 1.538 million and 1.225 million, respectively.

For most of 2020, the population of working-age immigrants declined on net year-over-year. This far exceeded the net exodus during the 2008 Great Recession, and the brief net exodus during Trump’s first year, when his mere presence seemed to have jawboned illegals into fleeing.

Our analysis shows that 17.929% of jobs were held by immigrants in February. In April 2018, the immigrant share spiked to 18.083%—a one-month anomaly attributable to the random noise that affects all economic data at one time or another, although arguably within the long-run trend.

We are told incessantly that the labor market is strong, that the demand for labor is far greater than the supply. If true, employers should be raising wages to lure workers back to work. That didn’t happen. Average nominal hourly earnings stagnated in February, rising exactly 0.0% from January. (Experts were expecting a 0.5% gain, Month-over-Month.) Similarly, the 5.8% gain in average hourly earnings that so-called experts expected, year-over-year, came in at just 5.1%.

Worse, year-over-year CPI inflation in February came in at 7.9% This is beginning to get serious even by the standards of the 1960s-1980s Great Inflation.

It means that most Americans suffered wage cuts.

The big picture: The U.S. economy still has roughly 2 million fewer jobs than before the mass layoffs that began two years ago this month. And immigrants, legal and illegal, seem likely to edge out Americans in the recovery—and to beat down the wages of those Americans who succeed in getting jobs.