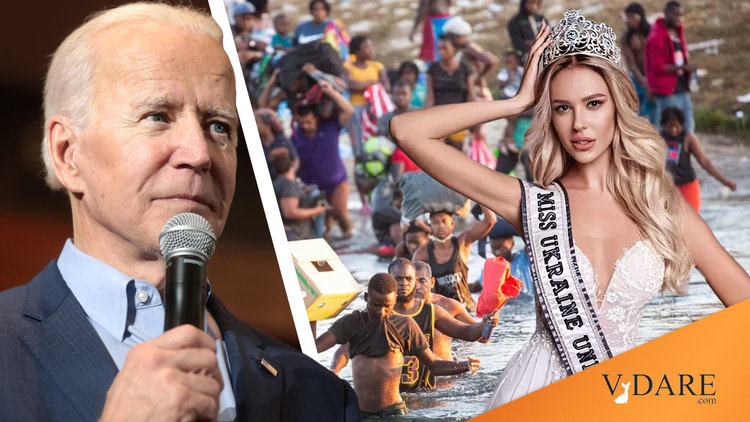 Even Biden Officials Warn Of A “Mass Migration Event” If Title 42 Is Scrapped! Will Traitor Joe Listen?

The illegal-alien invasion might get even worse this year. Title 42—shorthand for Donald Trump’s decision, and subsequent policy, to use federal law to deport illegal aliens on health grounds—could be on the chopping block. The Biden Regime has signaled that it might end Title 42 because of Leftist pressure. Powerful Democrats want it gone, too, and are trying to  exploit the Ukrainian crisis to do so. Yet if Title 42 goes, Biden’s own officials warn of a “mass migration event” that will exceed the mad rush to the border last fiscal year. Can Biden survive?

Trump triggered Title 42 in early 2020, which helped stem the rising tide of illegal border crossings. Biden has used it too—and frequently: 75 percent of the more than 1.4 million single border encounters with single adults ended in Title 42 deportations. But unlike Trump, Biden doesn’t use this policy to deport “unaccompanied minors” [What is Title 42, the COVID-19 border policy Democrats want Biden to end?, by Camillo Montoya-Galvez, CBS News, March 18, 2022].

Still, Biden’s position on the matter is murky. For the most part, he delivered on his promise to reverse Trump’s immigration policies. That’s why we saw record numbers of illegal migrants last year. But he kept Title 42.

Leftist hysteria about the WuFlu was one reason. You can’t really demand strict measures at workplaces to combat an epidemic, then import illegals who show up at the border, possibly with a deadly virus. Much of the Progressive base spent 2021 double-masked and locked indoors to keep the Viral Bogeyperson away. Thus, Biden could say he maintained Title 42 to protect public health. Few would argue.

But that few includes the Treason Lobby. Even if they were petrified of The Virus, they still wanted as many immigrants allowed in as possible. And in some sense they succeeded. Thus former border chief Mark Morgan complained in August that Biden sprayed 40,000 virus-positive illegals across the country [DHS dropped 40,000 COVID-19-positive migrants in US cities: Ex-border chief, by Paul Bedard, Washington Examiner, August 12, 2021].

Now, with reports that Ukrainians and Russians are coming to the border, Democrats and activist groups have turned up the volume. Senate Majority Leader Chuck Schumer and the powerful New Jersey Senator Bob Menendez are among the loudest voices. “The United States is supposed to welcome refugees with open arms, not put them in additional danger by denying them a chance to plead their case and leaving them at the mercy of criminals and smugglers,” Schumer said earlier this month. “Now’s the time to stop the madness” [Democratic lawmakers, civil liberties groups demand end to Title 42 border expulsions, by Mario Sacchetti, Washington Post, March 10, 2022].

The real madness, of course, is permitting sick illegals into the country. But what’s a few Americans getting sick and possibly dying if it means importing new Democrat voters and pushing along the Great Replacement?

So far, Biden has resisted. In court, the Regime forcefully argues for keeping Title 42 in place. “Under the Title 42 order, those non-citizens can be rapidly screened, and then quickly expelled, substantially reducing the risk of transmission,” a Justice Department attorney said in federal court in January [Biden administration defends controversial Trump-era border policy barring asylum seekers in court, by Priscilla Alvarez, CNN, January 19, 2022].

But federal judges are confused. One of the judges who heard the January case, Trump appointee Justin Walker, noted that the same DOJ had argued against Remain in Mexico, another Trump-era immigration policy, because it doesn’t “align with the administration’s values.” He wondered why the regime seems to contradict itself.

The DOJ argued the “public health emergency” justifies Title 42, but not Remain in Mexico. In essence, the only reason the feds will enforce any sensible immigration policy is if they can tie it to Leftist virus panic [Biden Administration Fights in Court to Uphold Some Trump-Era Immigration Policies, by Zolan Kanno-Youngs, New York Times, March 13, 2022]. (Enforcing Remain In Mexico, by the way, could keep out virus-positive illegals, too.)

Meanwhile, other Regime officials, such as those in the Department of Homeland Security, have recommended scrapping Title 42, which is renewed bimonthly [U.S. leaning toward ending COVID-era expulsions of migrants at Mexico border, by Ted Hesson, Reuters, March 9, 2022]. Mexico might get the news as early as next month, even though a court ordered Biden to resume Title 42 expulsions of “unaccompanied minors” [The Biden Administration Has Been Planning To Tell Mexico That A Trump-Era Policy Could Soon End And Attract More Immigrants To The Border, by Hamed Aleaziz, Buzzfeed, March 10, 2022].

Scrapping it would align with Biden’s new focus of moving on from the “pandemic” and convincing the public that it’s time to return to normalcy. It would also, of course, allow even more illegals to stream into the nation and replace the Historic American Nation.

This is what the Democrats truly want. Open Borders hurts them in the polls right now, but the bigger goal of demographic replacement outweighs short-term political pains.

While Democratic bigwigs and Biden’s advisers aren’t too worried about the impending deluge, other federal officials are sounding the alarm. During internal discussions, officials have warned that Title 42’s disappearance would “generate a mass migration event.” They estimate that 2022’s illegal entries will match fiscal 2021’s total—more than 1.7 million—or even exceed it. Officials say that human traffickers and the drug cartels are eager to exploit this loophole. Without the ability to quickly deport these illegals, there would be the incurred cost of housing them. That means taxpayers will have to pay more for Biden’s border treason [Biden officials fear "mass migration event" if COVID policies end, by Jonathan Swan and Stef Knight, Axios, March 17, 2022].

The only plan to counter it: surging personnel to the border to handle the increased flow of illegals. But without the tools to quickly secure the border and quickly deport them, the additional personnel won’t solve the problem. Only tougher policies will restore order.

That doesn’t seem in the cards. But this will be costly for Biden. A border surge that exceeds last year’s record will be a disaster for his administration and his party’s hopes in November. Biden’s own polls show that voters hate his immigration policy and would prefer tougher measures. The president tried to address this hostility in his State of the Union address by sounding tough on border enforcement, but everyone knows he shoulders responsibility for the invasion. And that polling will only get worse as it warms up and the border crossings increase.

Biden could switch to aggressive enforcement of Remain in Mexico, which forces illegals to wait in Mexico while their bogus asylum pleas are adjudicated. But Biden is committed to ending it, even after a federal court ordered his administration to restore it. Only a few hundred illegals have been kept out of the country under the policy, and Biden circumscribed the categories of illegals to whom it applies: only single adult men who don’t belong to a protected class or claim disability will be deported under it. Biden wants to ensure Remain in Mexico doesn’t act as a deterrent [‘Remain in Mexico’ is back under Biden, with little resemblance to the Trump version, by Nick Miroff and Arelis R. Hernández, Washington Post, February 4, 2022].

If the border collapses and the warm months witness more than 200,000 encounters with illegals, Biden might change his mind. Then again, he would have to withstand the fury of Treason Lobby Leftists, whom he has thus far done little to resist. Question is, will plummeting poll numbers and a crisis that can’t be ignored force him to shift?

My guess: Biden will do nothing and pretend he is securing the border while hundreds of thousands of illegals waltz into the country. He might even try to claim, again, that the illegals are really all Miss Ukraines fleeing Vladimir Putin.

Whatever happens, the GOP cannot sit on its hands. It must follow the example of Texas Attorney Ken Paxton and wage unrelenting lawfare against Biden.

Paxton’s lawsuits successfully forced Biden to rescind his deportation moratorium and restore Remain in Mexico. More litigation is necessary on every policy Biden has created and will create.

Republican lawmakers must promise to end the anarchy if they regain the majority.

And no matter what Biden does, they must pledge impeachment if they retake Congress. He is breaking the law by not faithfully executing it. The best way to send a message is not to tweet, but to impeach. The Camp of the Saints invasion at the frontier with Mexico demands an uncompromising political attack.

Impeachment is the only appropriate answer to Biden’s border treason.