Is this the new normal? Once again, the headline job data has conventional Main Stream Media analysts in ecstasy (or would, if they weren’t afraid Trump would get the credit). But immigration patriot analysts (basically, us here at VDARE.com) see unmitigated disaster. It is now absolutely clear that immigration, and immigrant displacement of American workers, is back—so much that even American wage growth is being impacted. The only answer: a border wall to stop the illegal alien flow; a second Operation Wetback, including E-Verify, to get the illegal alien self-deporting; a moratorium on legal immigration.

In April, for the fourth straight month, immigrant displacement of American workers and the immigrant workforce (legal and illegal) both surged, more than reversing that gains that appeared to be evident by the end of 2017— what we then optimistically saw as an emerging “Trump Effect.” Simultaneously, it is now clear that illegal immigration is also surging again. The one bright spot: this utterly discredits lying MSM attempts to downplay illegal immigration in the face of backlash to the Pueblos Sin Fronteras caravan and President Trump’s fierce reaction. Nevertheless, it is now clear that only vastly stronger executive action, and above all legislation, can stem the Historic American Nation’s dispossession via non-traditional immigration.

The widely-cited survey of business payrolls reported a job gain of 164,000 in April, about 30,000 less than Wall Street expected. Still, this marked the 91st straight month of job gains – far and away the longest such streak on record. Unemployment nudged below 4%. Not since the late 1960s have we seen rates this low.

Yet the “other” employment survey, of households rather than businesses, reported a miniscule 3,000 net job gain for April, with foreign-born immigrant workers gaining 728,000 while native-born American workers lost 725,000. April was the third consecutive month in which foreign-born workers gained jobs while native-born Americans lost them. (See below.) 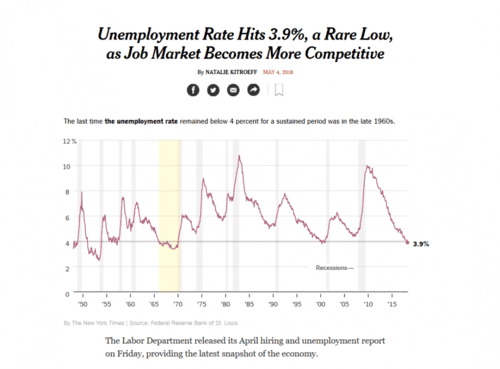 And where are the wage gains that would normally be expected in such a strong economy? Mainstream economic writers are flummoxed:

Wages increased by 2.6 percent over the past year, not much faster than inflation…

One mystery of the American economy is this: How can employers continue to raise pay so gradually, when the labor market keeps getting tighter? In the 1990s and early 2000s, the last time the job market looked like this, wages for rank-and-file workers rose at an annual rate of around 4 percent.”

The answer, which the MSM seems incapable of admitting: mass immigration. April marked the fourth consecutive month in which the foreign-born working age population (including illegals) grew by more than 1 million from the same month the prior year. (The good news—sort of: April’s rise was less than that in March’s).

It’s hard to believe, but less than six months ago we were seeing to year-over-year declines. The last five months of 2017 saw the foreign-born population fall by an average 100,000 from the same month of the prior year.

These are net figures. Over a 12-month period an average of perhaps 300,000 immigrants die and an equal number leave the U.S. voluntarily. So that 1.597 million net rise in foreign-born population since last April means that implies that more than 2 million foreign-born individuals may have actually settled in the country over that period. (This excludes tourists and other short-term entrants.) (See our coverage of the February Jobs report. )

In percentage terms, the immigrant working-age population grew 3.8% over the 12 months. If this growth rate persists, it portends a doubling within 19 years. By contrast, the native-born American population rose 0.51% over this period —a rate that will require 144 years for a doubling. If both rates persist that long, the term “native born” will refer to a minuscule fraction of the U.S. population.

As mentioned above, the latest job numbers also show native-born Americans being displaced by their foreign-born competitors. In April:

Since taking office in January 2017 President Trump has presided over a labor market in which immigrants have gained 2.07 million jobs, an 8% increase, while native-born Americans gained about 1 million jobs – a rise of only 0.8%. As far as the labor market is concerned, “America First” has not translated to Americans First.

In normal times this might be a big story. But the even the conservative non-Main Stream Media is currently too steeped in economic euphoria to notice.

Trump has not even begun to repair the damage done by eight years of Obama. Native-born American workers lost ground to their foreign-born competitors throughout the Obama years, and, shown above, this trend accelerated significantly in the months leading up to the election.

In April the immigrant share of U.S. employment was 18.1%—larger than any month for which we have data. (The series starts in January 2008.)

Also, it’s increasingly clear that a renewed illegal alien surge is underway. Border Patrol statistics for April 2018 indicate a 35,158 rise in South West Border apprehensions from the prior April – an increase of 223%. For most of 2017 apprehensions were below the same month of the prior year.

What strikes my eye: the amazing similarity between the pre- and post- 2016 election trends for BP apprehensions and our foreign-born working-age population figures. Both rise (year-over-year) in the months leading up to November 2016, decline through most of 2017, before spiking in February, March, and April of this year.

In other words, illegal immigration has a remarkably rapid impact on the foreign-born workforce population—and labor force competition faced by American workers.

This seems to confirm that there was a strong “Trump effect” in 2017 that both deterred border crossers and also sent illegals back over the border. But that now seems to have evaporated.

Which leaves us with the only answer: dramatically enhanced enforcement—perhaps including the prosecution of Democratic politicians who enable Sanctuary Cities and States—and, above all, legislation to slash legal immigration, preferably an immigration moratorium.