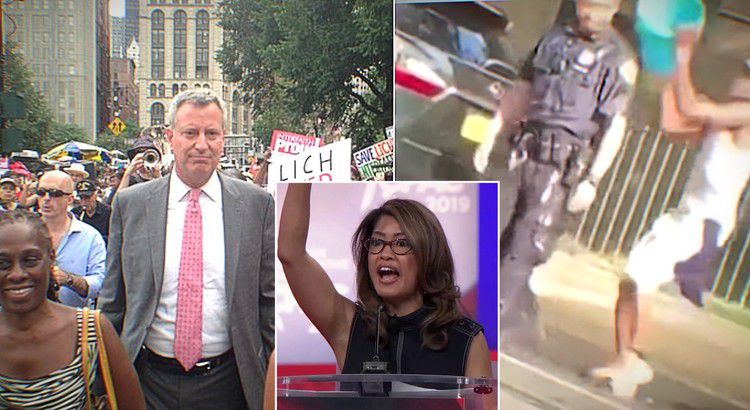 Dante de Blasio is the son of Democratic New York Mayor Bill de Blasio, who has abandoned his crime-wracked city (but not his public office, tax-subsidized salary or perks) for a quixotic presidential bid to become America's social justice warrior-in-chief. Calculated to promote his race card-playing dad's campaign, Dante stoked anti-cop hysteria a few weeks ago with a widely disseminated USA Today op-ed. [Dante de Blasio: My dad gave me 'the talk.' When someone called police, I felt the fear, July 1, 2019] Dante's screed came just days after de Blasio declared at the first Democratic debate:

"I'm different from all of the other candidates in this race in that I'm raising a black son in America."

De Blasio reminds audiences that Dante is black as often as former GOP presidential candidate John Kasich reminded every unfortunate person within earshot that his dad was a mailman. A Google news search for "De Blasio black son" yields nearly 85,000 hits. We get it. We get it. We get it.

Because his pigment and political bloodline give him the special privilege of making blanket assertions about, well, anything, Dante was rewarded with a major media platform to ply a kinder, gentler version of the vile "Cops=pigs" narrative to an audience of millions. Police officers are menaces on the streets who pose a greater threat to "people of color" than unknown strangers, homeless people and drug addicts, Dante de Blasio argued. He had "no fear on a night walk until the police came," the op-ed declared darkly.

"We're taught to fear the people meant to protect us, because the absolute worst-case scenario has happened too many times. This reality cannot continue."

But actual reality smacked NYPD officers in their heads in two viral videos this week that had non-white witnesses in the 'hood laughing and jeering hysterically. In Harlem and Brooklyn, cops were attacked with buckets of water while onlookers hooted, hollered and incited chaos. A brazen young thug, not paralyzed in the least by the anxiety that de Blasio conjured up for his column, hurled a bucket that hit one of the LEOs in the back of the head. Members of the neighborhood mobs where the attacks occurred—similarly unaffected by Dante's manufactured disquietude—whipped out their phones to share their glee and cheered like they were watching an episode of "WWE RAW."

"Who does that in their right frame of mind? People who believe there's no consequences," a law enforcement source fumed to the New York Post. "There's total anarchy out here." Another NYPD supervisor warned: "Today it's a bucket of water. Tomorrow it could be a bucket of cement." In 1993, a Housing Authority cop John Williamson was murdered after a Washington Heights mob went wild because NYPD officers were towing illegally parked cars. Someone hurled a 30-pound bucket of spackling compound from a building rooftop that struck and killed Williamson.

Here's more of the reality Dante de Blasio and his cop-hating daddy won't acknowledge: The Big Apple's police force has long been the target of racially driven vigilantes who are frightened of nothing and nobody.

The de Blasios paint a grim picture of an America where racist cops lurk on every corner, laying in wait to execute innocent black men. Meanwhile, on Planet Reality, men and women in blue give their lives to protect and service on increasingly lawless streets. In the past month alone:

Five of these officers died in the span of nine days. Where are the de Blasios? Living in La-La-I-I-Can't-Hear-You Land—surrounded by armed police details, of course.

Michelle Malkin's  [Email her] is the author of Invasion: How America Still Welcomes Terrorists, Criminals, and Other Foreign Menaces to Our Shores. Click here for Peter Brimelow’s review. Click here for Michelle Malkin's website. Michelle Malkin is also the author of Unhinged: Exposing Liberals Gone Wild, Culture of Corruption: Obama and his Team of Tax Cheats, Crooks & Cronies, ,Who Built That: Awe-Inspiring Stories of American Tinkerpreneurs, and Sold Out: How High-Tech Billionaires & Bipartisan Beltway Crapweasels Are Screwing America's Best & Brightest Workers.