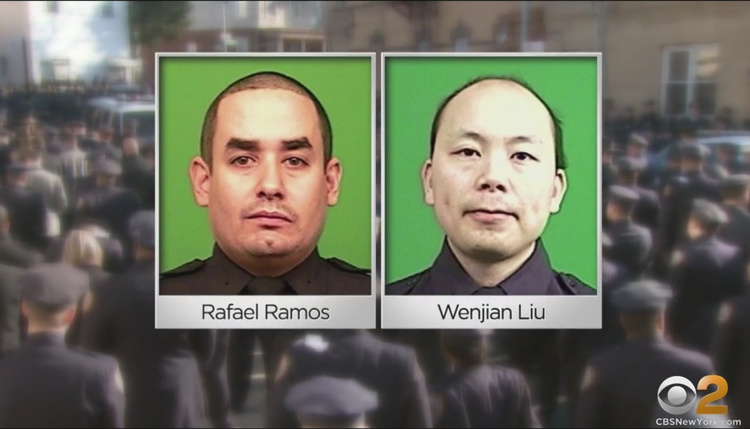 Based on tonight’s press conference at Woodhull Hospital, where the two officers were taken, and declared dead this afternoon.

Ramos was 40 (I’m not sure about Liu’s age, but he was considerably younger). Liu had just married two months ago, while the also (much longer) married Ramos, who had turned 40 on December 12, had a 13-year-old son. Ramos had served for many years as a school safety officer, and only became a patrolman three years ago.

The officers were out of the 84th Precinct, but had been assigned to work in Bedford-Stuyvesant’s 79th Precinct, due to heightened violent crime there. They were sitting in a Crisis Response Vehicle (CRV), Officer Ramos in the driver’s seat, and Officer Liu in the front passenger’s seat, eating their lunch, when the killer, Ismaaiyl Brinsley, 28, approached on the passenger side. Brinsley adopted a shooting stance, and fired multiple shots into the vehicle, hitting both officers repeatedly in the head. It’s not clear if the officers even noticed Brinsley, before he fired.

The perp then fled to the subway, where he shot himself to death.

Brinsley had shot his girlfriend in Baltimore at app. 7:45 this morning, gravely wounding her. He was believed to have been living in Atlanta, but had the girlfriend in Baltimore, “connectivity” (Bratton) to the Bedford-Stuyvesant area, where he murdered the two policemen, and was something of a transient. No one seems to know yet how he supported himself, where else he’d traveled of late, or what his criminal history was. 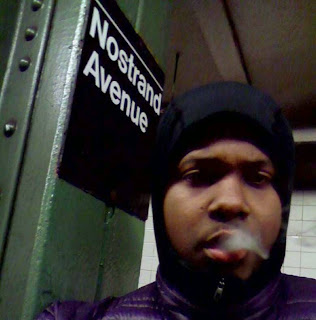 Racist cop-killer Ismaaiyl Brinsley in the subway in Brooklyn (Nostrand Avenue is one of those long Brooklyn streets that cross many neighborhoods.) The NYPD has yet to release photographs of the victims.