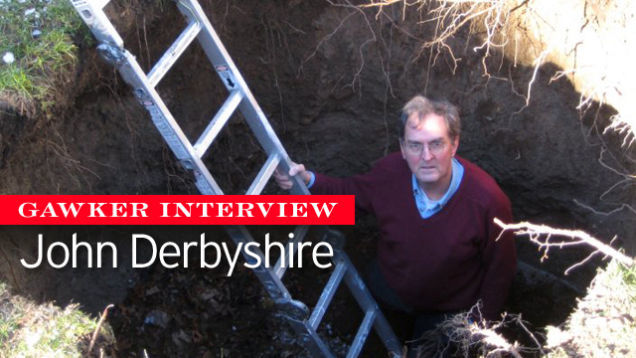 John Derbyshire On Fathers, Daughters—And Uncle Reality: What The Next Generation Doesn’t Know Might Hurt It

I am obliged to James Kirkpatrick for alerting me, in his excellent VDARE.com piece, to Conor Friedersdorf's remarks about an interview I gave nine years ago.

Friedersdorf [Email him] is an editor at The Atlantic. His April 9 post on that magazine's blog concentrated on the difficulties faced, as reported by my interview, by the editor of a conservative magazine, striving to keep on board older conservatives, with their "pessimism and cynicism" about race, while recruiting younger readers who have been, as Kirkpatrick puts it, "broken to Politically Correct orthodoxy."

Friedersdorf's remarks betray a curiously static view of human nature. Older Americans, he implies, sprang from the womb with their ugly racism fully formed. They then drag it through life to the grave.

But, on the other end of the age scale, younger conservatives purged of racism will maintain their condition of immaculate racio-moral purity throughout their lives:

Parting ways with Derbyshire isn't going to do anything to improve race relations in America. But it has brought National Review a step closer to relying on the younger rather than the older generation of conservatives. On subjects related to race that's a very good thing.

Where does one begin with this?

In the first place, I will tell Mr. Friedersdorf something he may have difficulty believing: When I was 17 in England, and the Civil Rights movement was starting to make news even from across the pond, I whole-heartedly supported it. So did everyone else of my generation known to me. (I was born in 1945.)

Older people were a different matter. A shared experience among us late pre-Boomers and early Boomers was the yelling match with a parent over the rights and wrongs of what was happening in the U.S.A. and being shown on our TV screens.

My Dad was wont to say things like (I shall bowdlerize slightly): "Blacks are hopeless. They'll never amount to anything. It's ridiculous to let them mix freely with whites."

That would start me off, and we'd go at it hammer and tongs for a few minutes until the Weather Forecast came on. In England, nobody talks through the TV Weather Forecast.

Yes, I was a youthful idealist. We all were—including, by his own testimony, VDARE.com’s resident “white nationalist,” American Renaissance Editor Jared Taylor.

So what happened? Whence the "pessimism and cynicism" about race?

Fifty years happened—that's what happened. Fifty years that thoughtful, observant people of my generation lived through at the regulation speed of one day per day.

We watched the trillions of dollars being spent on social programs—watched the actual dollars disappearing out of our own paychecks. We saw the vast apparatus of make-work government jobs being assembled. We were there, observing, day by day, when the preferences and favoritism and set-asides were being implemented. We watched as jurisprudence was twisted into pretzel shapes in the name of a bogus "fairness." We saw the independent black nations of Africa and the Caribbean implode into ruin, chaos and beggary.

We lived through it; we saw it all.

And fifty years on, we see the results. Yes, some real gains in equity, though offset by some losses; but also intractable black poverty, intractable gaps in academic achievement, intractable, stupendous differentials in crime rates.

Pessimism and cynicism? Is someone surprised?

Friedersdorf's entirely static view of the human personality therefore needs some revising—at least in the case of us geezers.

Meanwhile, how about the kids?

I have an anecdotal.

I need to do a little scene-setting. It's the Memorial Day weekend. We have an assortment of friends over for a backyard barbecue. The only two relevant to the story are Kyle and Sammy (neither the person's real name).

Kyle is precisely my daughter Nellie's age, 19. The two of them in fact first got acquainted at an infants' playgroup. Both are home on vacation after completing their college freshman year.

Sammy is much older—even older than me. He is a businessman who owns a string of small enterprises, including some convenience stores. One of those stores, he mentioned at the barbecue, is in Jamaica, a majority-black neighborhood of New York City. Hearing this, I asked him if his Jamaica store had suffered the attentions of a flash mob.

Sammy of course knew what I was talking about. No, he replied, so far he'd been lucky; though a store further along on the same street had been flash-mobbed.

Nellie and Kyle, standing nearby, were both looking puzzled.

Nellie: "Why would the store get flash-mobbed?"

Me: "It's a store. In a black neighborhood."

Nellie (slightly affronted): "Dad, you don't know anything. A flash mob is when people pre-arrange to all be in the mall or somewhere at the same time and start singing or something."

Me: "It's also when a gang of young blacks pre-arrange to storm a store, steal stuff, then run off before the police can arrive."

Nellie, with her well-practiced Uh-oh, Dad's-in-racist-mode-again look of resignation and disgust: "I never heard of that."

I cross-checked with Kyle.

No, he'd never heard of it, either.

So here are two intelligent, well-read 19-year-olds, both utterly unacquainted with one of the minor antisocial phenomena of our time.

Why? Why do you think? Because that phenomenon is race-centered, that's why.

New York Times Token Conservative columnist David Brooks has remarked that our preferred method for dealing with unpleasant social realities is to keep as far away from them as possible.

And the kids' ignorance of race realities is of course the fault of us—their parents—practicing the David Brooks Rule.

When my (Chinese immigrant) wife and I decided to move to the ‘burbs and start a family, we bought the best house we could afford in a neighborhood as far as possible from concentrations of blacks.

This is what everyone does. It's what our neighbors did.

Those neighbors are all white—and about 95 percent liberal Democrats.

Was there ever such a nation of hypocrites as ours? Here, for the record, is the student racial breakdown of the high school Nellie attended. (Click on "Students.")

We would dearly have liked to settle in Cold Spring Harbor, but the house prices were out of our range. See if you can figure out why.

[VDARE.com note: For the benefit of those who don’t like clicking on links and doing calculations, here’s a chart.  ]

And so the kids end up at age 19 with a big reality gap.

So sheltered have our kids been from racial realities, they even find ghetto scum culture exciting, in a remote and abstract way, like alien robo-warriors.

Nellie actually listens to hip hop. This I know because we share a car. Often, when I turn the ignition key and the radio comes on, it has been set to Nellie's preferred station. In the fraction of a second it takes me to hit the mute button, I get a blast of mother*cking this, bitch that, and n*gga the other.

Nellie, I hasten to say in my own defense, began violin lessons at age six and played good classical music through to college orchestra level. One does one's best. Civilizationally speaking, given the anfractuosities of human nature, it might have been wiser to raise her in the 'hood.

Still and all, as a friend remarked when I grumbled along these lines, at least she's alive.

I note in passing that Maureen O'Connor, my unusually smart and honest — for a leftie, I mean — interviewer at at Gawker.com, shares Nellie's nostalgie de la boue.

At any rate, she boasted of an acquaintance with NWA's song "Straight Outta Compton":  "A good outlook on authority. Also pro-gun." ['I May Give Up Writing and Work as a Butler’: Interview with John Derbyshire, April 9, 2012 ]

Shoot A Motherfucker In A Minute
I Find A Good Piece O' P*ssy, I Go Up In It
So If You're At A Show In The Front Row
I'm A Call You A Bitch Or Dirty-Ass Ho
You'll Probably Get Mad Like A Bitch Is Supposed To
But That Shows Me, Slut, You're Composed To
A Crazy Muthaf*cker From Tha Street
Attitude Legit Cause I'm Tearin Up Sh*t

(The full lyrics are here. Several commentators on the interview expressed astonishment that a blinkered, ignorant, drooling racist such as myself should be an opera lover. Contrariwise, nobody thought it odd that Ms. O'Connor favors songs about crazy muthaf*ckers and dirty-ass hos.)

Bottom line: the kids are plumb ignorant about race—because we took care to raise them that way.

The antics of ghetto degenerates are so far removed from their direct experience that they find them interesting and exciting, like the Ghost Dance of the Sioux.

We parents had much assistance in our Ignorance Project from the Main Steam Media, with their crime stories filled with strangely raceless perpetrators, with "teens," "youths," "thugs," and "the robber was described as a tall man in his thirties."

And of course the excuses: the same threadbare excuses I've been hearing all my adult life, all those long weary decades, though to a 19-year-old they come as if new-minted and dewy-fresh:

(That last link, by the way, is exceptionally data-rich, and well worth bookmarking for reference—if you are among the 0.0000001 percent of us who care about data. The blogger from the Those Who Can See blog, known to me only as M.G., deserves a round of applause.)

Given that we start from this depressing base, may we hope that our youngsters will travel a path to wisdom and understanding, rather than, as Conor Friedersdorf  hopes and believes, remaining locked forever in light-as-air freshmen-orientation PC dogmas?

I think we may. I would go further and surmise that they may even arrive at honesty and realism about race without being sucked into the whirlpool of "pessimism and cynicism" I spoke of.

Some of this will just be Uncle Reality forcing himself on the attention of soon-to-be-a-minority white Americans. As VDARE.com’s James Kirkpatrick said:

As young conservatives age, have children of their own, and confront the realities of 21st century post-America, at least some will wander off the reservation. Ultimately, the brutal reality is that the premise of absolute racial equality is simply not true. The collapse of entire communities like Detroit or even entire states like California will be harder and harder to ignore.

Some of it will be one-off systemic shocks. Detroit and California, yes. And the future course of events in South Africa will be particularly worth watching in this regard.

And some of it—call me a cockeyed optimist if you like, but I do so believe—some of it will be science: always Uncle Reality's trump card.

The necessary research may not be done in the West, which is sunk too deep in self-enstupidation where the human sciences are concerned.

But it will be done.

And as science gains understanding, it gains power—the power to fix things, to remediate.

Race-wise, the 21st century may not be so bad.

John Derbyshire [email him] writes an incredible amount on all sorts of subjects for all kinds of outlets. (This no longer includes National Review, whose editors had some kind of tantrum and fired him.  ) He is the author of We Are Doomed: Reclaiming Conservative Pessimism  and several other books. His writings are archived at JohnDerbyshire.com.

Readers who wish to donate (tax deductible) funds specifically earmarked for John Derbyshire can do so here.