Obama-Sponsored Black War on the Police Spinning Out Of Control 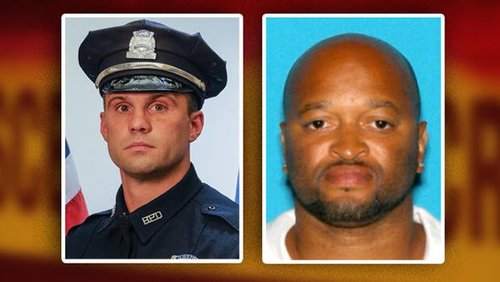 Officer John Moynihan was shot in the face at point-blank range by a black man on Friday and you probably didn’t hear about it [Boston Police: Officer shot, suspected gunman dead, WCSH 6, March 28, 2015]. Moynihan, currently in a coma, never had a chance to reach for his weapon before he was gunned down by one Angelo West, who was killed at the scene by responding officers. After the killing, a hostile mob of blacks screaming “Hands Up, Don’t Shoot” was only held at bay because of Boston Police Department Superintendent-in-Chief William Goss, an African-American who calmly spoke to the crowd and was taunted with racial epithets by his co-ethnics for doing so [Gelzinis: Mob posturing to cameras tries to make Boston Ferguson, by Peter Gelzinis, Boston Herald, March 29, 2015]. And even as Officer Moynihan fights for his life, this hasn’t stopped Ferguson-style black protest groups from holding racially segregated meetings so as to “honor the wishes” of the killer’s family.

It’s only the latest episode in what has become a slow-motion black war against police officers enabled by President Barack Obama, Attorney General Eric Holder, and an increasingly unhinged and hysterical Main Stream Media. They have emboldened violent and racist black thugs, essentially issuing them a license to kill, and imposing on whites a duty to die.

Long before either report was written, Holder threatened to destroy the FPD, unless it engaged in “wholesale changes” [Ferguson police chief fires back at reports his department is disbanding, by Stephen Deere, St. Louis Post Dispatch, October 30, 2014]. The Ferguson police chief has since been forced to resign and the Department will likely be forced to sign a consent decree, in what could be another step towards a de facto federalization of all police departments.

The political attacks on (mostly) white policemen have been relentless and the sacrifice of one white cop after another has done nothing to appease the aggressors. Yet this is nothing compared to the seemingly endless series of cases about “good boys” who turn out to be career criminals supposedly “murdered” by trigger-happy white policemen.

The MSM’s reaction to the debate about all this is predictable—shut it down! Fed up with white resistance to its support of the Ferguson rioters, on December 8, the St. Louis Post-Dispatch shut down all reader comments on editorials and letters for two months.

But the ignoring the issue didn’t make it go away. It seems like these attacks are only accelerating in recent months.

Yet listen to the statement of Madison, WI Police Chief Michael Koval after the shooting of Tony Robinson or the statements of New York:

In light of so much things that have happened, not just across the country, but in our own community, it’s understandable that the reaction seen from our citizens is extremely volatile, emotional and upsetting, and we understand that.

… some of the worst parts of black history would have been impossible without a perverted, oppressive law and order, too.

What do Reconstruction and “blockbusting” have to do with constant attacks on law enforcement? And if those are valid excuses, what hope is there of preserving public order and the rule of law?

The sad truth: these police chiefs are following the tone set by the top. Instead of a forthright condemnation of violence against police from our leaders, the President implies that the police are partly to blame, the Attorney General targets entire departments, and even the leaders of entire Police Departments think they can buy off the mob by sacrificing officers.

As in the movie Groundhog Day, we seem to be reliving this story every day anew. But this is no movie; this is America’s waking nightmare. It cannot go on forever. And it won’t have a happy ending.