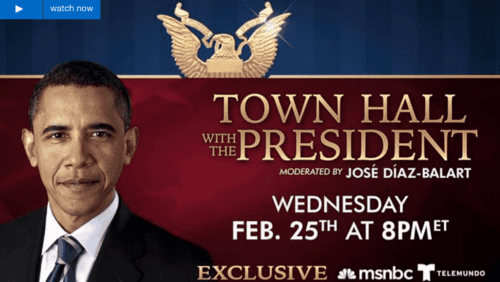 In an administration which increasingly resembles the court of an emperor, Barack Obama traveled to Miami, Florida last week, where he held a “Town Hall” meeting for an audience including illegal aliens and their supporters. The apparent purpose: to reassure them that Amnesty is going to go through—and that he intends to drown the historic American nation. Did we hear any high-ranking Republicans complain about this?

But if you were just an ordinary American living in Miami, you probably couldn’t have participated. For one thing, tickets were not made available to the general public. It was an invitation-only event with a purpose the White House made clear.

“the president has a desire to engage in a genuine conversation about issues important to the community. “

“The community”? The American Community?

No, the activist Latino immigrant and pro-illegal alien community.

“It makes for an interesting, dynamic place and a great symbol of how immigration has made our country unique,” said the presidential spokesman.

So the president went to Miami, spoke to the group, and he assured them that things are going their way. Maybe he’s right. After all,

President Obama defended his plan to protect up to 5 million undocumented immigrants from deportation and bashed Republicans for blocking a more permanent immigration solution during a town hall event at Florida International University on Wednesday.

In fact, according to USA Today’s Gomez, Obama “used much of his time to criticize Republicans in Congress”. If only the Republicans had congressional leadership that was worthy of such criticism!

Immigration and Customs Enforcement agents and other border security officials to focus their deportation efforts on undocumented immigrants who pose threats to national security, have extensive criminal records, are members of gangs or are recent border-crossers.

In other words, to deport as few illegal aliens as possible.

Nevertheless, the fact that illegals still might be deported at all is a provocation to the Treason Lobby and its foot soldiers. So this issue came up in the “Town Hall”:

Asked by multiple town hall attendees why their relatives were still facing deportation proceedings, Obama said it sometimes takes time for every employee in such a large bureaucracy like the Department of Homeland Security to change course so quickly.

And Obama proceeded to threaten officials who don’t get on the Open Borders bandwagon:

Translation: Border Patrol and ICE officers who insist on enforcing the law are going to be dealt with—after all, we can’t have that!

Of course, this is precisely why VDARE.com writer Federale has argued that the GOP-controlled Congress should legislate to protect these patriot bureaucrats.

But illegal aliens really have no need to worry, says the man who has sworn to uphold the Constitution and the law of the land:

If you've been here for a long time and you qualify generally, then during this period even with legal uncertainty they should be in a good place.

Erika wasn’t satisfied with Obama’s answer. She said: "It's the same old story. It just sounds like an excuse."

So, despite everything Obama has done for the Latino Open Borders Crowd, it’s never enough—as long as anybody anywhere is still subject to deportation. They just don’t want the U.S. to deport illegal aliens.

At the Miami “Town Hall,” Obama displayed an Us vs. Them mentality:

Obama appeared visibly annoyed answering a question about whether both parties were “playing political ping pong” with the issue. “Democrats have consistently stood on the side of comprehensive immigration reform, Democrats have provided strong majorities across the board for comprehensive immigration reform, and you do a disservice when you suggest that nobody was focused on this, because then you don’t know who’s fighting for you and who’s fighting against you,” he said.

So Obama is telling Latinos that Republicans are “fighting against you.” Anybody who doesn’t want open borders is simply anti-Latino.

Another Obama comment at the Miami “Town Hall” revealed his profound antipathy to the historic American nation and his view of how politics should work:

Take a moment and reflect upon what Obama is saying here. Even beyond the oxymoronic “nation of immigrants” cliché, which all politicians use, there is something very disturbing here.

Immigration enthusiasts, including many conservatives, claim to believe immigrants are assimilating and are going to be good Americans.

But Obama seems to be saying that a Latino president (Rodriguez) or a president of Chinese ancestry (Chen) is not going to defend the interests of the entire American nation—but of his particular ethnic group.

Of course, if you think about it, isn’t that how Obama and Eric Holder themselves see things?

Thus he appeals, over your head and mine, directly to illegal aliens, their relatives, supporters and the well-heeled Treason Lobby that supports them.

So my question is – where is the opposition to Obama’s agenda? Isn’t there supposed to be a political party somewhere that will oppose this anti-American agenda being imposed upon us from the top?