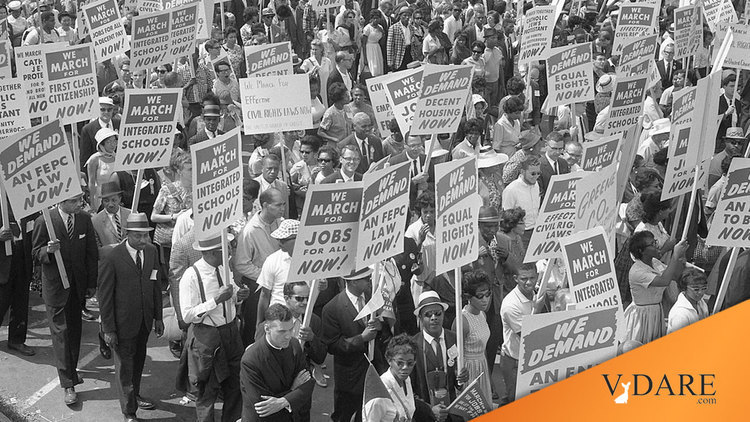 See, earlier Frank Morris Speaks For African-Americans On Immigration By Donald A. Collins

It’s rare to hear from someone I consider a true hero. Last week I had just such an opportunity when I listened to a speech by Civil Rights icon and Congressman John Lewis. Yet Lewis’s support for open borders threatens to undermine everything that he has accomplished. 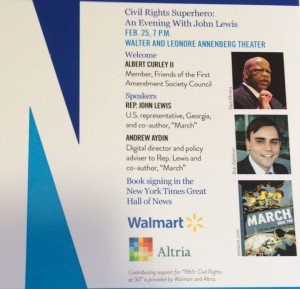 Lewis spoke at the Washington DC Newseum about his experiences in the Civil Rights Movement [Civil Rights Superhero: An Evening With John Lewis and Andrew Aydin, Newseum, February 25, 2015]. He delivered a spellbinding stem-winder recounting his dangerous history in the struggle for equality for African-Americans. In the end, I believe that what Lewis and his comrades fought for was simply for America to adhere to the rule of law and adhere to the ideals in our founding documents.

I must admit his stories often brought me close to tears. And his wildly enthusiastic reception by a mostly non-black audience was marked by repeated standing ovations.

Everything Congressman Lewis said was marked by hearty applause, which I was glad to join. But when Lewis called for comprehensive immigration reform, my hands remained still.

He can hardly be blamed. After all, it seems like every Democrat these days—except me—has taken the Obama Open Borders position. This support comes from both those who have experienced privilege and oppression.

When I lived in the North Beach area of San Francisco, near Nancy Pelosi’s wealthy district, I heard reports that kids in the local youth center spoke over 20 languages. And we can expect Lewis to feel a certain empathy for downtrodden illegals after his youthful experiences in what was practically a war zone in Alabama.

But does Lewis truly fail to grasp the difference between the Civil Rights Movement and the illegal immigration invasion? He seems strangely willing to ignore the very rule of law he once fought so hard for.

Not all African-Americans share this delusion. As I recently noted, Dr. Frank Morris and other African-American immigration patriots consistently point out that it is our fellow citizens of color who suffer the most from the massive invasion of illegal aliens that has resulted from the 1965 Immigration Act.

And this isn’t surprising. After all, the main supporters of illegal immigration are self-interested economic, ethnic, and religious lobbies—not patriotic citizens.

If Democrats such as Pelosi and Lewis think that letting in endless numbers of aliens, legally and illegally, will ensure Democratic hegemony, they are sadly mistaken. They are inspiring a rebellion by an increasingly widespread and diverse group of Americans who are watching their quality of life utterly collapse.

More and more Americans are experiencing the negative consequences of mass immigration. They know wages are declining. They see unemployment rising. They are witness to the collapse of our rule of law.

John Lewis may have been right in the past, but no progressive can support transforming America from a middle class nation of under 200 million people in 1965 into the projected 500 million poverty-stricken Americans of 2050. Fighting for equality means fighting for the victims of mass immigration, including African-Americans, the unemployed, and the working class.

The fight against mass immigration isn’t in contradiction to the Civil Rights movement. It’s part of the same struggle.

It’s a tragedy that people like John Lewis can’t see that and continue to undermine the very causes they sacrificed so much for.