Obama Campaigns among His Hispanic Base, Promising to "Punish Our Enemies"

The President cruised through southern California late last week and found time for a sit-down interview in the Univision studio of former illegal alien Piolin Sotelo which was played on Monday.

An English transcript is available, fortunately for our edification. Naturally the main topic was amnesty, amnesty, amnesty. The President had a mouthful of excuses, trying to cajole Hispanics to vote for Democrats despite their failure to deliver the Big Enchilada as promised many times by BHO.

Notably, the President declared ”we’re gonna punish our enemies” – namely the patriotic law-abiding Americans who want immigration to be legal, controlled and reduced. He also expressed disapproval of deportation, a keystone of immigration enforcement.

Snips from the transcript are below, with paragraph breaks added by me for easier readability.

And if Latinos sit out the election instead of saying, we’re gonna punish our enemies and we’re gonna reward our friends who stand with us on issues that are important to us, if they don’t see that kind of upsurge in voting in this election, then I think it’s gonna be harder and that’s why I think it’s so important that people focus on voting on November 2. [. . .]

Well, the main thing we have to do to stop deportations is to change the laws. What my administration has done is actually change our priorities because you mentioned that there are a lot of families out there, but the truth is, it’s actually that the way we’re now enforcing the law puts less emphasis on families, more emphasis on those with criminal records and so the big increase in deportations has actually to do with people with criminal records who’ve been engaging in illegal activity, not just because they don’t have papers, but because they’ve been engaging in criminal activity.

But the most important thing that we can do is to change the law because the way the system works – again, I just wanna repeat, I’m president, I’m not king. If Congress has laws on the books that says that people who are here who are not documented have to be deported, then I can exercise some flexibility in terms of where we deploy our resources, to focus on people who are really causing problems as a opposed to families who are just trying to work and support themselves. [. . .]

You know, I’m a big supporter of the Dream Act. I’ve spoken about it many times. I used to be a sponsor of the bill when I was in the Senate. What I wanna do is I wanna consult with immigrant rights groups and with the Congressional Hispanic Caucuses to make a strategic decision. It may be that we can pass the Dream Act without comprehensive immigration reform.

The only thing I’m concerned about is if we just take that small piece, then maybe it becomes harder for us to get the whole thing and so I would love to see the Dream Act passed right away, but I think it’s very important for us to have a discussion within the community. If we think realistically that’s the only thing that we could get done, then we may make that judgment, but I’m still holding out right now to see if we can get the Dream Act passed and AgJobs passed as part of a broader package so that we allow the 10 to 12 million people who are still living in the shadows to come out and not live in fear.

Look, obviously, the Dream Act would be better than nothing and that’s something that I think we’re gonna have to judge. But I don’t wanna make that decision by myself. I wanna be in a discussion with the community and we’re not gonna know until after this election. So, so much depends on what do things look like after the election.

Of course the DREAM Act is a sizable stealth amnesty for millions, the rewards of which extend far beyond some benefits for alien college students. That’s why the President likes the legislation – it quietly puts lots more open-borders Democrats in the pipeline!

Below, as a candidate, Obama demonstrated his fondness for Mexican culture. 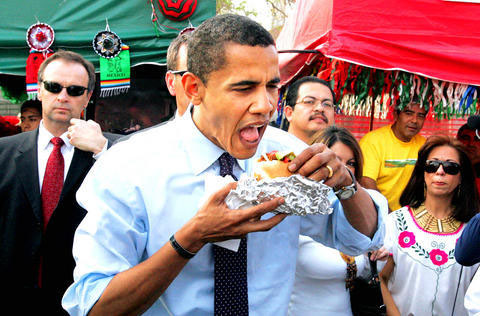