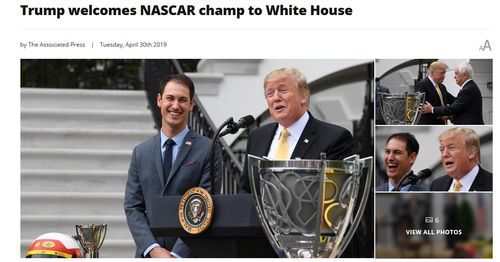 Here is an example of Trump honoring his Middle American base. On April 30th, NASCAR champion Joey Logano was received at the White House, along with wife Brittany, team owner Roger Penske and other members  of Team Penske.   Logano's 2018 Ford Fusion, #22, was parked in front of  the South Portico.

President Donald Trump welcomed NASCAR champion Joey Logano — and his race car — to the White House. Trump celebrated the 2018 NASCAR Cup Series Champion Tuesday on the South Lawn, along with team owner Roger Penske. With Logano's car parked nearby, Trump praised the driver and called it "one beautiful car."   Trump also congratulated Penske and the team, saying he had known Penske a long time. He described NASCAR as a thrilling sport and called himself a fan.

There is a video available at the link.

"They're winners, right," said Trump. "The team is a winner and NASCAR is a winner."  Logano thanked his team and gave Trump one of his helmets and a small trophy.  Trump concluded the event by inviting the team and some members of Congress to tour the Lincoln bedroom.

Trump also said this (after the 9 minute mark):

NASCAR is not only a thrilling display of skill and power but a celebration of the American spirit. So true.  No matter who wins the race you never forget what matters most–God, family and country.

At the start of NASCAR races they have a prayer and a flag salute.

Logano was gracious, remarking that  "I kinda gotta pinch myself to think what I'm doing here right now,"