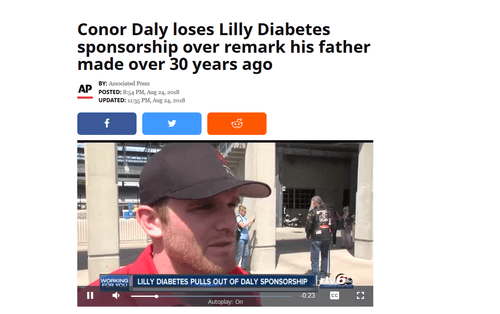 Conor Daly: Unto the Seventh Generation ...

ELKHART LAKE, Wis. (AP) — Lilly Diabetes has pulled its sponsorship of Conor Daly’s No. 6 car in the NASCAR Xfinity race at Road America, citing a racially insensitive remark made by the driver’s father in the 1980s that surfaced this week.

In a statement, [father Derek] Daly said he admitted to using a racial slur for African-Americans during a radio interview in the early 1980s. Daly, who had just moved to the United States then, said the term had a different meaning and connotation in his native Ireland.

“I’m Irish, sure, Racism’s part of my culture.”

Daly said he was “mortified’” when he learned how the term was used in the United States and has never used it since then. Conor Daly, 26, wasn’t born when his father made the comment.

I pointed out a few years ago in a column entitled “Corruption of the Blood” that progressives are moving in the direction of viewing racism as a hereditary taint that genetically infects descendants.