Memo From Middle America: Is Trump Right That Mexico Is “Second-Deadliest Country”—And Does It Really Matter?

Claiming that President Donald Trump is wrong about something or other has become a major specialty of the Main Stream Media. Invariably it comes down to trivial logic-chopping. Case in point: the recent flood of negative comments after his comment on Mexican violence—all of it missing the point that Mexico is, in fact, dangerous.

Recently, Trump tweeted, “Mexico was just ranked the second deadliest country in the world, after only Syria. Drug trade is largely the cause. We will BUILD THE WALL!”

Mexico was just ranked the second deadliest country in the world, after only Syria. Drug trade is largely the cause. We will BUILD THE WALL!

The next day, the Washington Post announced Donald Trump is wrong. Mexico isn’t the second-deadliest country in the world [by Joshua Partlow, June 23, 2017].

Was Trump right or wrong? And does it really matter?

There are different ways to organize Mexican murder statistics. You can do it by raw numbers, by per capita rates, or you can break it down into states, cities or municipios of Mexico, and you can compare Mexico’s stats with those of other countries.

Each method has merit. And no matter what method is used, it shows Mexico has a real criminal problem.

Mexico’s northern neighbor is the world’s biggest drug consumer, and that’s obviously one big factor. Corruption in Mexico is another.

Trump’s tweet about the “second deadliest” refers to the rating from the London-based International Institute for Strategic Studies (IISS), which includes former UK and US officials in its membership. The IISS rating wasn’t of the world’s deadliest countries overall, but of those “in conflict.” IISS considers the Mexican drug war a conflict. 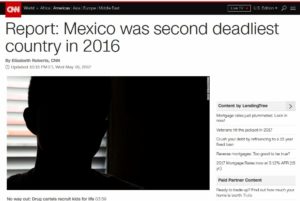 The Mexican government objected to the report, disputing the number of fatalities and asserting that the Mexican situation was not comparable to that of other countries.

Two days after Trump’s tweet, CNN ran a more nuanced article asking, Is Mexico the world's second most dangerous country, as Trump says? That depends  [by Jeanne Bonner, June 24, 2017].  “If you go with raw numbers, Trump is right”, writes Bonner, but “based on population, Mexico is right”.

To complicate matters further, IISS itself subsequently issued a statement:

One of the findings that attracted attention and debate centered on the figures for Mexico, which placed the country second in terms of total estimated armed-conflict fatalities in 2016. We accept there was a methodological flaw in our calculation of estimated conflict fatalities that requires revision. Our researchers are working to rectify this and we will share the results in due course. We anticipate this will result in Mexico’s conflict remaining among the ten most lethal in the world, by estimated fatalities attributable to an armed conflict.

The statement also pointed out “The Armed Conflict Database and Survey do not measure homicides on either an absolute or per capita basis. We estimate deaths directly related to conflict. We do not provide an assessment of the levels of violence in any country.” The difficulty is determining which murders are related to the drug war and which are unrelated to the drug war.

But both types of murder are still murder.

So Mexico doesn’t have the highest murder rate in Latin America but it’s still in the top ten and its rate is over three times higher than the American murder rate.

Note that Puerto Rico, which some want to make a U.S. state, has an even higher rate than Mexico. El Salvador, Honduras, and Guatemala, the sources of a great number of illegals who pass through Mexico, are ranked #1, #3, and #5 respectively.

Regarding Mexico, it’s a big country and some regions are much more peaceful than others.   Therefore, a per capita murder listing by city is very useful.  The Mexican NGO Consejo Ciudadano para la Seguridad Pública y Justicia Penal, A.C. (Citizen Council for Public Security and Penal Justice) publishes a list of the world’s 50 most murderous cities annually.

Cities in war zones are not included so for the purposes of this ranking, countries afflicted by drug cartel wars are not considered war zones, and each city must have a population over 300,000. On the 2016 World’s Fifty Most Murderous Cities list, 42 were in Latin America.

Brazil had 19 cities on the list, more than any other country.

Another international ranking system, the Global Peace Index from the Institute of Economics and Peace,  is based on a wider set of criteria (internal conflicts, neighboring country relations, terrorism impact, perception of criminality, UN peacekeeping funding, weapons importation, violent crime, homicide rate, political terror and external conflicts).  This index also puts Syria in the #1 position, but has Mexico down at #22—not very enviable but better than #2 (Afghanistan is #2 in this list, Iraq is #3).

As a long-time resident in Mexico, I won’t tell people if they should or should not visit the country. But if you go, know what you’re doing and where you’re going, and have a clear plan.

I’d also recommend the State Department’s Country Information Page and Mexico Travel Warning.  The latter is periodically updated and breaks its assessments down to the state level. The State Department has also issued warnings on local matters in various parts of Mexico.

Bottom line: President Trump is unquestionably right Mexico has a real problem with violence. Having Open Borders does not keep us safe. We need to build that wall for a number of reasons—and the high crime in Mexico is one of the most important.

And despite all the shrieking from Mexico, I think in the long run it will actually help them too. After all, good fences make good neighbors.

And it’s about time Donald Trump started delivering, directly, on his promises to put America First.