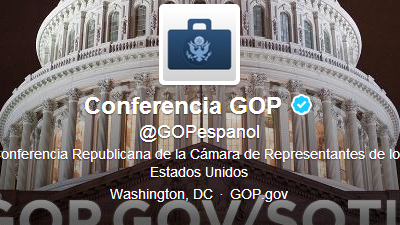 Republican elites apparently confuse “outreach” with hispandering, as shown by the party’s Tuesday initiation of a Spanish language Twitter feed.

This action follows another colossally bonehead undertaking, the decision to put Senator Marco Rubio up as the responder to the President’s State of the Union address — in English and Spanish.

Note to GOP suits: Americans don’t want to be forced into bilingualism, either official or de facto. We don’t like paying for multilingual ballots or other government documents and expensive services for non-English speakers. Diverse immigration has become a largely negative force in society, particularly as our institutions are pushed into submission to foreigner demands, like “bi-lingualism” (aka Spanish) in schools and elsewhere.

There’s nothing wrong with outreach of a proper nature. In fact, given the malice of the press and pop culture toward conservative ideas, basic education of newbies is quite necessary. I liked Mark Krikorian’s idea of Opportunity Centers and also his individual activity of teaching citizenship classes.

But a Spanish-language strategy (like Newt Gingrich’s bilingual Americano website) is far more damaging than helpful. If the GOP suits are determined to infuriate grassroots conservatives (and create a Tea Party Party), then they are doing well. Of course, any Spanish-language behavior on the part of Republicans sends the message that traditional language assimilation is no longer expected.

Here’s what the media has to say — including negative Democrat opinions, naturally.

(CNN) — As the GOP continues its renewed engagement of the Latino community, the House Republican Conference will use a new Twitter handle Tuesday: @GOPespanol.

The Spanish-language Twitter feed, launched Monday, will be active Tuesday night as part of the Republican Party’s response to the president’s State of the Union address.

As of Tuesday morning, the account had about 120 followers and a total of five tweets.

Sen. Marco Rubio of Florida will deliver the official GOP response–both in English and Spanish–Tuesday night. It will mark the first time the party has broadcast its response in a second language.

After the GOP captured only a small minority of Latinos in the November elections, the party has boosted its efforts to reach out to the community, particularly by changing the party’s tone on immigration and pushing reform proposals.

Chief among the proponents of immigration reform is Rubio, himself, named recently as the “Republican Savior” by Time Magazine.

Democrats are quick to paint the new outreach efforts as nothing but a political ploy to appear more inclusive and win elections.

“You can’t put lipstick on a pig,” Rep. Debbie Wasserman Schultz said on a conference call Monday, prebutting Tuesday night’s Republican response to the State of the Union address.

The Democratic National Committee chairwoman said Republicans will fail in their efforts because they’re not changing their policies, only their messaging.

“They’ve seen the aftermath of the election, with the top to bottom review, and they don’t think there’s anything wrong with their polices, they just think they have to package them better,” she said.