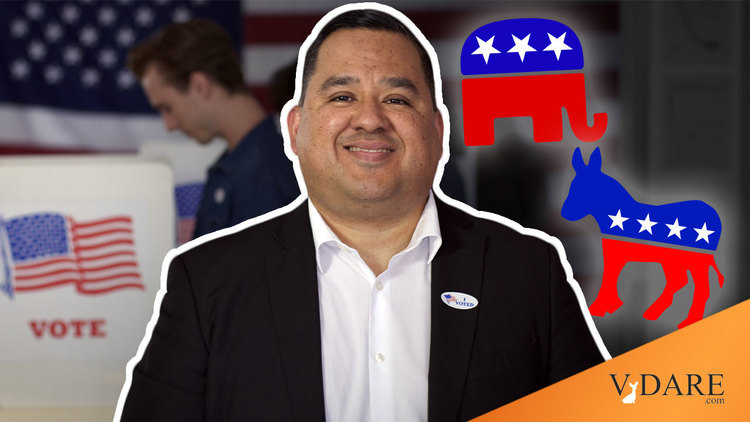 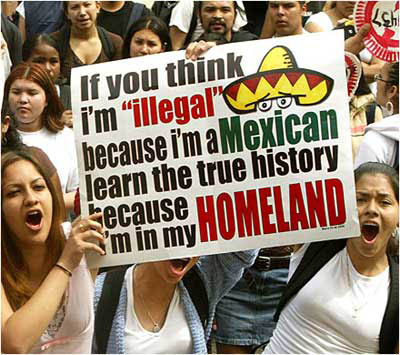 Stupid Republicans. They have a winning issue in defending the country from millions of hostile foreign job thieves, but certain Rs — like hopeless squish Newt (Puerto Rican Statehood!) Gingrich — want to piss it away to please open-borders apologists like Ruben Navarrette in an “outreach” effort that is based on compromising first principles of American sovereignty and national security.

Pandering to lawbreakers is not the ticket to electoral success. Any hispanics who require a mass amnesty for millions of their tribe are not worth ruining the country.

Of course there are many patriotic Americans of hispanic descent, and they don’t need BS talk about amnesty to vote for pro-borders candidates.

Instead of bargaining away American sovereignty for a handful of votes at best, Republicans should work harder on getting more worthwhile candidates who are stand-up defenders of the country. Some voters stay home on election day because too many candidates turn out to be friends of amnesty.

Observant citizens understand that when the government rewards a behavior, we all get more of it. Reagan tried the reward trick in 1986, and it did nothing but open the floodgates. We cannot let amnesty happen again, ever.

CORAL GABLES, Fla. (AP) — Republican speakers at a conference on reaching Hispanic voters urged the party to tone down its rhetoric on immigration and to take up comprehensive reform in Congress, warning that the party could lose ground with the country’s increasingly diverse citizenry if it doesn’t.

“(Hispanics) will be the swing voters as they are today in the swing states. If you want to elect a center-right president of the United States, it seems to me you should be concerned about places like New Mexico, Arizona, Nevada, Florida, Texas, places where but for the Hispanic vote, elections are won and lost,” said former Florida Gov. Jeb Bush, who co-chaired the conference organized by the new Hispanic Leadership Network.

But those gathered at the South Florida conference seemed split over whether the GOP’s lack of Hispanic support is simply because of the party’s tone, or if there’s a more substantive problem with the GOP’s policies.

“If you think it’s about tone, you have missed the point,” independent columnist Ruben Navarette told the audience of more than 300 at the Biltmore Hotel in the Miami suburb of Coral Gables. Other speakers blamed a liberal bias in the media and a few extreme voices in the party.

Lincoln Diaz-Balart, the Florida Republican who retired from Congress this year and has long championed immigration reform, suggested Republicans need to work their tone and message.

“The decibels have to be lower,” he said. “It doesn’t’ matter how good are policy positions are, if we are perceived as being anti-immigrant, we cannot be the majority party.”

Diaz-Balart also urged congressional leaders to quickly take up a comprehensive immigration bill that a bipartisan group of legislators has quietly worked on for months. Diaz-Balart promised the new proposal would address previous concerns about people in the country illegally earning residency before those who follow the rules.

“It solves many impossible-to-solve issues,” he said, “including making sure people waiting legally get preference.”

Bush did not speak on immigration Friday, though he has repeatedly supported comprehensive reform. He focused on the need for Republican officials to reach out to Hispanics in other ways, such as improving public education and appointing more Latinos to state offices and judgeships “even when nobody is watching.”

Conference co-chairman and former U.S. Trade Secretary Carlos Gutierrez urged support for expanding free trade agreements with countries like Colombia and Panama, which he said is in line with the views of most Hispanic voters. He described those in the party who oppose the expansion as “extremes.”

Although a moderator sought to steer the discussion away from the controversial issue of how to deal with illegal immigrants in the U.S., several conference panelists repeatedly returned to it.

“We can’t ignore that there are about 12 million illegal immigrants in the nation, and we have to address that,” said Aguirre, an ambassador to Spain under President George W. Bush.

Aguirre said doing so will take pressure off the nation’s borders and allow law enforcement to focus on serious threats like drug traffickers.

“We need to be more proactive in being proud to be pro-immigration reform. There’s no need to shy away from that,” he said.

But U.S. Sen. John Cornyn, R-Texas, addressed the issue of what do with those in the country illegally in only one line of his 1,600 word speech on U.S. border security.

“We must find a credible and compassionate solution to the 12 million illegal immigrants who are living in this country,” said the senator, who has repeatedly voted against comprehensive immigration bills that have reached the Senate floor. Cornyn was the only U.S. senator to speak at the conference.

Former Minnesota Gov. Tim Pawlenty, considered a potential 2012 GOP presidential candidate, said during a break he supports tackling border security first, but believes the country should address the status of those in the country illegally within the next 10 years.

“obviously there’s a thirst for this kind of discusion. tone i part of it,” he said “but the fact is at the end of the day you get measreud by yours aciotns.”