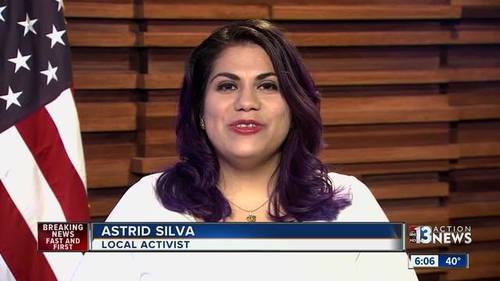 Needless to say, the Democrats’ selection of DREAMer Astrid Silva to give a Spanish-language response to President Trump’s February 28 address to Congress showed contempt for the Historic American Nation and its Republic of laws. But it has not been widely enough noted that Silva’s speech was a naked appeal to divisive ethnic resentment—which backed a clear (and all too credible) threat of violence. Fortunately, there are signs the Trump Administration knows the answer: deportation.

The Democrats presented two speakers to respond—former Governor of Kentucky Steve Beshear in English, and DREAMer Astrid Silva, in Spanish.

Thus far, President Trump has failed to abolish the DACA program. Actually, he doesn’t even need to abolish it, but just stop taking new applicants. As the program lasts two years, within two years’ time all the DREAMers’ provisional permits will have expired.

Trump has shown too much softness about the DREAMers, calling them “exceptional kids” and “incredible kids”. He has pledged that “we’re going to deal with DACA with heart.”

I wish Trump wouldn’t be saying these sorts of things. Bless his “heart,” but it betrays a certain naivety about how these things work. Besides, doesn’t The Art of the Deal author know that you don’t give up your trump cards at the beginning of the game?

But guess what? Despite all that, Astrid Silva doesn’t appreciate Trump’s sympathy for her and her fellow DREAMers. In her Democratic response speech, she never credited Trump for it and excoriated the president again and again on various issues.

There’s some real gratitude for you.

You can watch Silva’s speech here in Spanish or here in Spanish with English subtitles, transcript here: Read a translation of the Spanish-language Democratic response to Trump’s speech, By Bastien Inzaurralde , Washington Post, March 1, 2017.

Right off the bat, Astrid Silva identifies herself as a “DREAMer” whose family came here when she was four, “looking for a better life”. She sets herself up as “representing the Democrats, the Latinos and the 11 million undocumented immigrants who are an integral part of this country and who constitute the values and the promise of the United States, and whom Trump is threatening with his mass deportation plan.”

The speech by President Trump that we heard moments ago was divisive and its goal is to cause fear and terror in communities across the country. This serves as evidence and notice that the plans and vision of President Trump and the Republicans go completely against our values as Democrats, as Americans and as human beings.

That’s heavy stuff, directed against a president who, remember, called her and her fellow DREAMers “exceptional kids” and “fantastic kids”.

Who is this “our”? How about taking actions that aim to help the American community?

Silva goes on to say that Trump “…is spending resources to transform working families into targets for deportation. He wants to spend thousands of millions of dollars to build an unnecessary wall. And he is seeking ways to deny entry to our Muslim brothers and sisters.”

Sounds like she can identify with any group except the Historic American Nation.

Of course, she has to bash Trump’s campaign statements, saying that Trump”…has made very clear since the days of his presidential campaign that he wanted his supporters to believe that we immigrants are criminals and refugees are terrorists.”

And, shocker of shockers, Trump actually “…directed immigration officers to arrest and deport any undocumented person that they encounter, essentially legalizing racial prejudice and setting his mass deportation plan in motion.”

Isn’t it amazing how controversial it is in some circles just to enforce the law? Arresting and deporting “any undocumented person that they encounter” is actually the duty of immigration authorities—as long as they are allowed to do so, as they haven’t been for years.

Thus Silva refers to the recent case of Guadalupe Garcia de Rayos, an illegal alien mother who was “arrested and deported for no reason.”[For years, immigration authorities gave this Arizona mother a pass. Now she has been deported, By Samantha Schmidt and Sarah Larimer, Washington Post, February 9, 2017] Actually, she was arrested and deported for being an illegal alien. And as she was being deported, “protesters” tried to block the van that was taking her away.

Silva emotes “Today, Guadalupe is far away from her children, who are U.S. citizens [i.e. Anchor Babies] and are an example of the great impact that Trump’s actions have over the American people in general, not only in the undocumented community.”

That’s a good reminder that we need to plug up the Anchor Baby loophole as soon as possible. Then the whole family can be deported together.

“These people”, says Silva, “must not be a target or priority of ICE.” Why not?

Silva even indulges in some standard “who-we-are-ism”, when she said “This is not the kind of country that we are.”

Who is this “we”? Yet more lectures from a foreigner telling us what to do:

President Trump is returning to the darkest times of our (sic) history, criminalizing whoever is different, pitting us against one another, and sending a mistaken message to the rest of the world, thus helping foment the anger and hatred of terrorist groups toward our country.

Silva gets into other topics, including Obamacare, and then claims that “We immigrants and refugees are the soul and the promise of this country and we are not alone.“

Yes—another claim that “immigrants are the soul of the country”!

But not to worry, says Silva:

The Democrats have made a pledge to fight for us and for the working middle class. They are our line of defense against President Trump and the harmful policies of the Republicans in Congress, in the Senate, in the courts and in the streets. 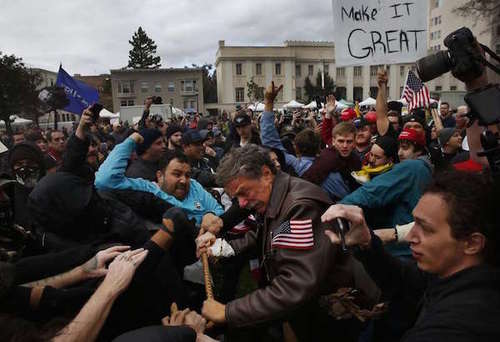 My emphasis. “In the streets”? Is the Democratic Party, through this illegal alien spokesthing, really threatening violence—the sort we’ve already seen directed against Trump rallies during the election and this last weekend in California?

Note that Astrid Silva is a non-citizen from Mexico—where non-citizens are deported if they meddle in Mexican politics. But in the U.S. this individual is allowed to be broadcast nationally making an identity-politics appeal to an ethnic subset of the population, many of whom aren’t even here legally.

Similar stunts are constantly used to guilt trip Americans into supporting Amnesty (under whatever name). Astrid Silva is not any sort of stranger to such stunts. In 2014, she was President Obama’s Poster Child in a speech announcing a DACA expansion. And, last year, she addressed the Democratic National Convention.

This has become tiringly common. Think Jose Antonio Vargas, [Tweet him] the Filipino illegal who was sent here by his mother when he was 12, and now runs a Soros-funded activist group.

Hopefully, things might be changing, at least based upon something which occurred the very next morning after Astrid’s speech. 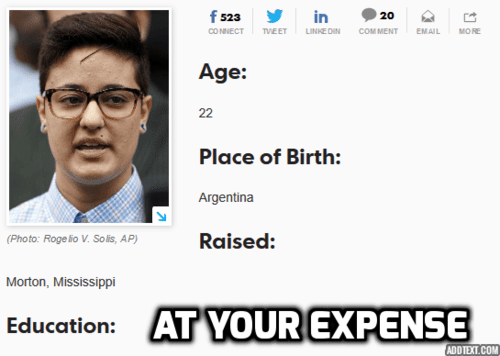 A certain Daniela Vargas, another obnoxious young female DREAMer “was detained by Immigration and Customs Enforcement”. Not only that, but she was detained “shortly after speaking at a news conference in downtown Jackson”, where she “spoke out about her fears of deportation”.

Miss Vargas is Argentine, not Mexican or Central American. Reportedly, she had been detained last February but then released. Her DACA status had expired. although she had a renewal application pending. [Immigrant detained after press conference by Sarah Fowler, Clarion-Ledger, March 1, 2017.] 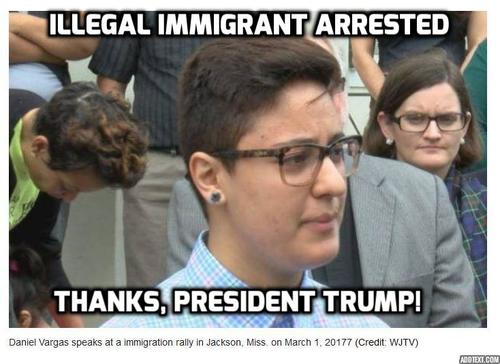 She’s now classified as being a “visa overstay” and the last I read was still in ICE detention. [Who is Daniela Vargas?, By  Sarah Fowler, Clarion-Ledger, March 3, 2017] If she is deported, it should occur in two or three weeks.

Does this mean that the raving paranoia of the Open Borders crowd, about illegal aliens “living in the shadows,” is about to be validated?

Or to put it another way: is our federal government beginning to enforce American law?

Post
Gun Control Won't Pass Because Americans Now Know The Police Aren't Coming To Save You—Sometimes Because They're Ordered Not To
MORE...
POPULAR TAGS