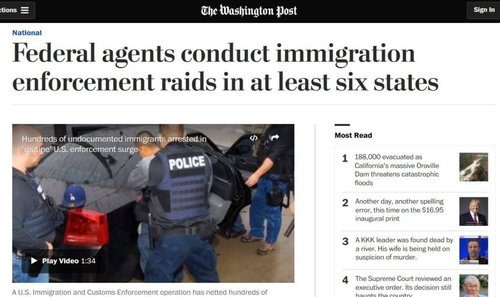 Allan Wall has a current blog entry here wherein he provides detailed commentary on a February 11, 2017 Washington Post article about a surge of activity among Immigration and Customs Enforcement [ICE] agents.  (Perhaps we should dub this "the immigration-enforcement awakening" or "the ICE spring.") [Federal agents conduct immigration enforcement raids in at least six states, By Lisa Rein, Abigail Hauslohner and Sandhya Somashekhar, Washington Post, Feb. 11, 2017]

The WaPo article is distressingly typical in that the term "illegal alien" never appears in it.  Always, it's "undocumented immigrant."

So, taking on this tiresome point once again, Saturday evening I sent an email to the three reporters—Lisa Rein, Abigail Hauslohner and Sandhya Somashekhar:

Your article linked above is primarily about raids to apprehend illegal aliens, but you never use that term, instead employing the euphemism "undocumented immigrants" throughout.  You'll find the correct term is used in the U.S. Code (e.g. here: law.cornell.edu/uscode/text/8/1365) but not the euphemism.**

"Undocumented" is wrong in a couple of ways.  Nowadays, about half of new illegal aliens are people who overstay their limited-term visas.  So they have documentation, but it's expired.  (This, by the way, is a civil violation, but such people are eminently deportable.)

The other half (and historically it's been higher) are those who crash the border—technically "entry without inspection."  They typically have abundant phony documents, so it would make more sense to call them "fraudulently-documented aliens" than "undocumented immigrants."  Border-crashing is a crime for which there can be both incarceration and fines; see 8 U.S. Code § 1325 - Improper entry by alien.  (Plus then deportation.  Note that deportation isn't a penalty.)

The term "undocumented immigrant" is intended to obfuscate what's going on, to make visa-overstay or border-crashing seem like a mere paperwork snafu.  So it's a euphemism, but not because of squeamishness: To be blunt, it's weasel-wording, and those who push its use have an obvious agenda.  So I urge you, going forward, to employ the correct, accurately descriptive term instead.  (Ever read the Eric Blair [George Orwell] essay, "Politics and the English Language"?  He would have agreed with me.)

I've heard or read reporters say, effectively, "Well, I don't know if he's an illegal alien.  That would have to be determined in court."  To which my rejoinder is, "OK.  So how did you know he's 'undocumented'?  Did you go through his pockets?"

And here's a pertinent 92-second video clip of Bill Clinton giving a State of the Union address in the mid-1990s:  http://videosnippits.homestead.com/IronicCampaignAd-20170208.html  Blair/Orwell would have approved.

** For completeness, you will find "undocumented" used here ...

... when referring to illegal aliens.  But it's in the form of "undocumented criminal alien," and I'm confident that those who pressure the media to use the euphemism won't be enthused about this variant.

One of the reporters sent me a limp response the next day: "The policy at the Post is not to use illegal aliens "

I have yet to decide whether to go another round with these reporters.  If so, I'll point out how this "policy" conflicts with journalistic ethics.

Meanwhile, for VDARE.com readers' information, the Eric Blair/George Orwell quote I had in mind was this:

Political language — and with variations this is true of all political parties, from Conservatives to Anarchists — is designed to make lies sound truthful and murder respectable, and to give an appearance of solidity to pure wind.

[Politics and the English Language, April 1946]