Memo From Middle America | Among Victims Left Behind On Trump’s Bloody Path To The Presidency—GOP Hispanic Consultants. They Deserve It.

Prior to the Trump Triumph, we were constantly told by the so-called experts that a successful Republican candidate needed a big portion of the Hispanic vote, which could only be obtained by surrendering on illegal immigration and campaigning in Spanish. The “experts” included the Main Stream Media (always eager to “help” the GOP), the Republican leadership, and well-paid political consultants, especially Hispanic political consultants.

Trump ignored all of this. He didn’t even have a Spanish language section on his website. As Trump declared during the GOP primaries, standing next to Jeb Bush: “This is a country where we speak English, not Spanish.”[RCP, September 16, 2015]

And not only did Trump win, he apparently got a few more percentage points of the Hispanic vote than Mitt Romney: 29% vs 27% according to CNN.

This is disputed by Gary Segura and Matt Barreto, who run the Latino Decisions website—and who, coincidentally, worked for Hillary. They claim Hillary Clinton garnered 79% of the Latino vote, which would be better than Obama did four years ago.  [Lies, Damn Lies, and Exit Polls, Latino Decisions, November 10, 2016] They also assert that Trump only got 18% of the Latino vote: In record numbers, Latinos voted overwhelmingly against Trump. We did the research, by Gabriel Sanchez and Matt Barreto, Washington Post, November 11, 2016]. But others on the Left disagree: Harry Enten disputes Latino Decision’s figures—Trump Probably Did Better With Latino Voters Than Romney Did  FiveThirtyEight, November 18, 2016.

But the bottom line: there was not some overwhelming African American-style Latino vote that prevented Trump’s victory.

In other words, among the many victims left behind on Trump’s bloody path to the Presidency was the entire industry of GOP Hispanic consultants.

What about Trump’s own Hispanic advisers? They fared little better.

Trump, interestingly, assigned them the task of finding “humane, efficient” ways of dealing with illegal immigration [Trump to Hispanic Advisors: Find ‘Humane, Efficient’ Ways to Address Illegal Immigration, by Todd Beamon, Newsmax, August 20, 2016]. But why would Hispanic advisers necessarily be experts on that question?

It didn’t really matter. Within two weeks, after Trump’s speech on immigration policy in Phoenix, members of this group were publicly bailing out and condemning Trump.

Needless to say, the result was an MSM frenzy, with members of the group lovingly quoted. 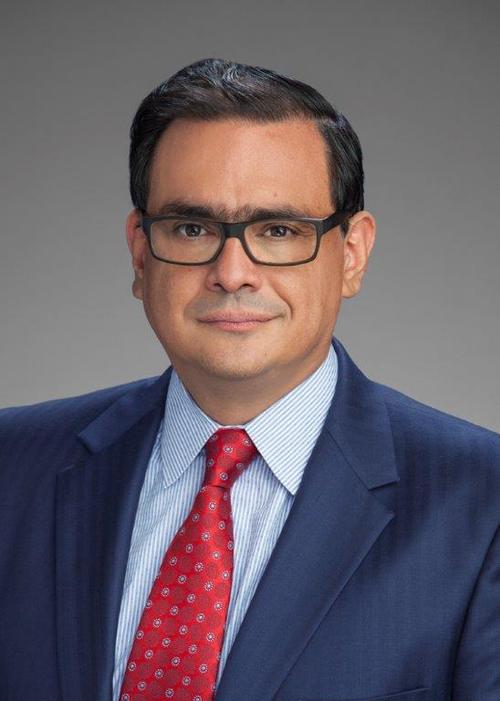 Jacob Monty [Email him] an immigration lawyer (!) from Houston who had acted as spokesman, gave several more interviews, with lots of quotes bashing Trump.

One Ramiro Pena, a pastor in Waco, dropped off the group and said, “I am so sorry but I believe Mr. Trump lost the election tonight”. [Some members of Trump’s Hispanic advisory board consider pulling support  by Reena Flores, CBS, September 1, 2016]

Grace Flores Hughes [Email her] a former Bush I official (and the woman who invented the term “Hispanic”) stated: “As long as he continues with this sort of rhetoric, no, none of us are going to support him. He’s too right-wing. The majority of people who are here illegally are here to seek a better life. The majority of them are good, hardworking, honest people. I think we need to concentrate on that and talk about that”. [Donald Trump’s ‘Hispanic Advisory Council’ is falling apart after his brutal immigration speech by Casey Tolan, Fusion, September 1, 2016]

Massey Villarreal, [Email him] former president of the Hispanic Chamber of Commerce and national Republican Hispanic Assembly, called the Trump speech “awful” and said: “As a compassionate conservative, I am disappointed with the immigration speech. I am no longer supporting Trump for president…” .[Austin American-Statesman]

What no one explained, and apparently were not asked: why these Hispanic “conservative” advisers went along with Trump until this speech, only to showily betray him afterward. Do they not want Americans to have a sane immigration policy? Or do they simply identify more with the Latino movement than the historic American nation?

Either way, they didn’t do much for Trump except bring bad press. 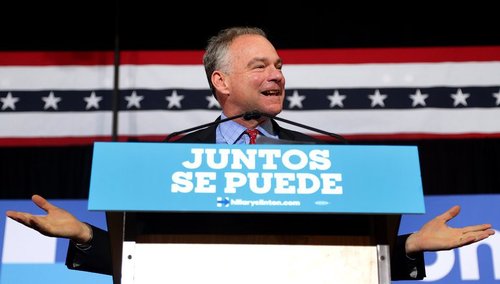 Meanwhile, on the Democratic side, Latinos were supposed to save the election for Clinton/Kaine. And the ticket flagrantly appealed to them on the basis of ethnic solidarity. On November 3rd, just days before the election, Tim Kaine gave a “historic” speech in Phoenix—‘historic” because it was entirely in Spanish. The New York Times crowed Well, Señor Kaine, Hablaste Español Muy Bien (“Well, Mr. Kaine, You Spoke Spanish Very Well”) [by Fernanda Santos, New York Times, November 3, 2016].

Still, the audience was only 150 people. The New York Times said it was: 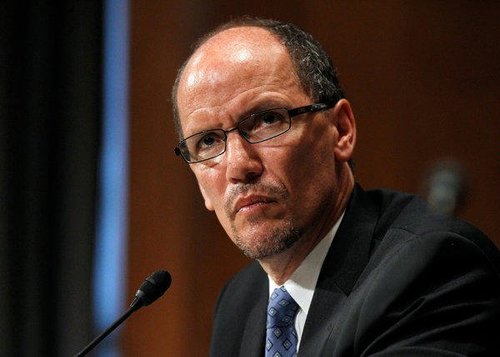 Hardly a mass movement. All the speakers at the rally spoke in Spanish, including a candidate for the state legislature, and Secretary of Labor Thomas E. Perez. (Pictured right.)

The Times didn’t report, but Breitbart did: in his speech

Sen. Tim Kaine cheered the demographic transformation of the United States caused by the nation’s federal immigration policies, telling his Latino audience on Thursday, “You are the future of America.” “By 2050, communities of color will represent the majority of our population,” Kaine said.

So in a foreign tongue, an American senator essentially mocked the American people being driven into minority status by its own government.

Significantly, this treasonous pandering seems to have backfired:

On Monday, Clinton and Trump were in a virtual tie when the Clinton campaign announced that Democratic Presidential nominee Tim Kaine would be giving the first ever presidential campaign speech in Spanish. Clinton actually held a 0.6 percentage point lead, according to an average of state polls compiled by Real Clear Politics. But by Friday, a day after Kaine’s speech in Phoenix, Trump had overtaken her and extended his lead to a more established 4 percentage points.

And, on November 8th, Trump carried Arizona with its 11 electoral votes, by a margin of 3 and a half points. 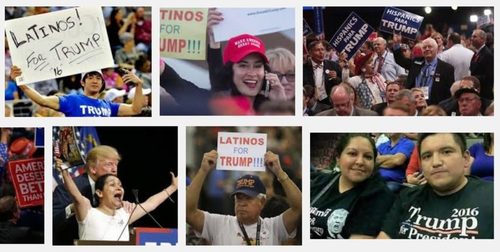 What this shows: as I have repeatedly said on VDARE.com, pandering to Latinos as Latinos will not help the GOP win votes. Trump’s appeal to civic nationalism shows the correct approach.

Note that Trump’s relative success with Latinos came despite a massive propaganda campaign labeling Trump and his supporters as enemies of all Hispanics.

So why did these Hispanics vote for Trump? Is it because they think he can improve the economy? Do they admire Trump’s leadership qualities? Do they explicitly vote based on conservative principles? Do they identify with the historic American nation? Or all of the above and more?

It doesn’t matter. It’s because Hispanic-Americans who think of themselves as Americans first will respond if they are approached as Americans.

But that means cutting out the “GOP Hispanic political consultants” who have long claimed that recycled progressivism and Open Borders will somehow win over La Raza supporters back from the Democrats, and that appealing to American patriotism would somehow alienate Hispanics even further.

The results are now in. The “GOP Hispanic political consultants” were utterly, totally and completely wrong.