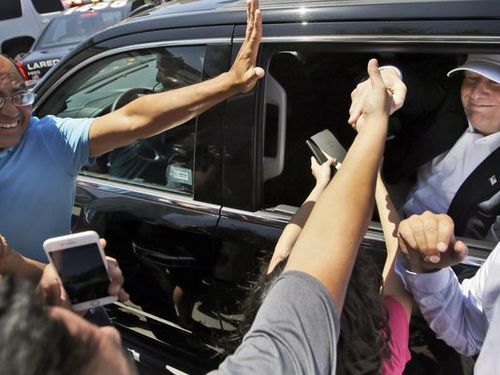 Ruben Navarrette, Jr., is a professional Hispanic pundit who has sensible things to say sometimes, but when push comes to shove, can be counted on to support the Mexican-American Chauvinist perspective. (Although he is technically a Republican.) See my article Ruben Navarrette —Where's He At? The VDARE.COM archive on Navarrette is here.

That makes it doubly interesting that Ruben, of all people, would write an opinion piece entitled Trump really could win Hispanic vote (My Central New Jersey, July 30, 2015).

Navarrette begins his column with this

As I watched the Donald Trump photo-op at the U.S.-Mexico border in Laredo, Texas, last week, where the 2016 election’s answer to P.T. Barnum backslapped grinning Mexican-American city officials, it occurred to me that news media commentators and political observers should stop mocking Trump’s claim that he will win the Hispanic vote. It could happen — not in the general election, but at least in the Republican primary.

Bear in mind that Navarrette is talking here about Trump in the primaries, among Republican Hispanics, and not in the general election.

Navarrette points out that the first state holding a primary or caucus that has a large Latino electorate is Nevada. So Navarrette specifically discusses Nevada:

Given that many restaurant, hotel and casino workers are Hispanic, and that many of them are presumably familiar with the Trump brand, which they consider synonymous with “success,” the billionaire businessman could get on a lucky streak in the Silver State.

And this poll is interesting:

Indeed, a new poll of GOP primary voters in Nevada by One America News Network shows Trump in first place among Hispanics. He was the choice of 27.7 percent of respondents overall. But, among Hispanics, the figure jumped to 31.4 percent. That showing did not escape Trump, who mentions the poll often.

So in Nevada, Trump is beating other Republicans (including Jeb “Act of Love” Bush) in polling.

Ruben Navarrette goes on to list his “three reasons that Trump is likely to make a decent showing with Hispanic voters”:

Navarette ends his column with

Hispanics for Trump? Oh yeah. Get ready. That’s a thing.