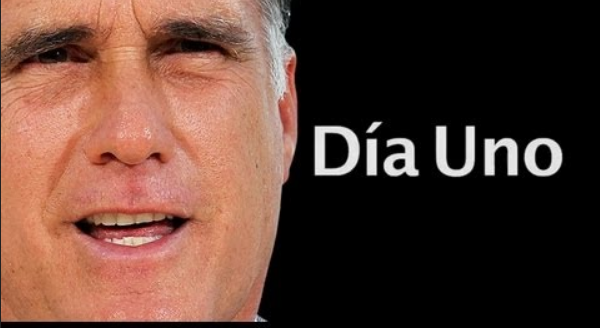 Here's the most prominently featured article on LATimes.com today, one that exemplifies a number of my old themes:

Presidential campaigns missing the mark in advertising to Latinos

President Obama and Mitt Romney have yet to adopt a nuanced approach to targeting the country's 21.3 million Latino voters, Spanish-language media experts say.

We all ought to know by now that a huge amount of journalism consists of reporters synthesizing materials provided by paid PR flacks. Obviously, reporters appreciate this. They don't mention it because they don't want to offend the folks who do much of the work for them by pointing out that the "experts" who return their messages so promptly with cut and paste talking points have glaring financial conflicts of interest. So, readers must keep this in mind.

But, how obvious is all this to readers? How obvious is it to reporters, even? I've read thousands of articles over the years that quote these Latino political consultants as objective experts, and maybe a half dozen articles pointing out their financial interestedness. There is very little evidence whatsoever that mainstream media understands what it doesn't mention. Here's a rule of the long-term effect of self-censorship in public discourse: What goes unsaid eventually goes unthought.

Both political parties agree that the country's 21.3 million registered Latino voters could make a crucial difference in this year's presidential election.

Yet in a race defined by massive spending on television ads, fast-response Internet videos and sophisticated social media efforts, both President Obama and challenger Mitt Romney have fallen short thus far when it comes to targeting Latino voters electronically, according to some Spanish-language media experts.

Republican candidate Romney trails Obama badly among Latinos, according to polls released last week, and isn't counting on them to propel him to victory. Even so, his Spanish-language advertising has been minimal and clumsy, the experts said.

Some of his ads are simply translated versions of his English-language commercials — a particular no-no when trying to reach Latino consumers.

Are there many people voting who don't speak English? If so, why?

Furthermore, from an honest government perspective, why is it a good thing for a candidate to say one thing in one language and something else in another language? If Romney is going to advertise in languages other than English, I am least reassured to learn that he's trying to say the same thing in all languages.

Obama has spent more heavily, and created more effective ads than his rival, but some experts said that so far he has failed to craft a campaign that keeps pace with the rapidly increasing size and sophistication of the Latino population, which climbed to 50.5 million in the 2010 census, from 35.3 million a decade earlier.

Those experts would say that, wouldn't they?

Neither campaign has adopted the approach honed over the years by businesses targeting Spanish speakers — one that not only depicts Latinos in positive settings, but also reflects attention to cultural nuance. A truck ad in the Midwest, for example, will show American flags and beer-drinking men, while an ad for the same truck in Arizona will depict Latino men hauling construction equipment and managing their farms.

"In the TV world, there's incredible sensitivity to trying to get Latinos excited; there's tons of money spent on 'how do we get this demographic to like our product?'" said Matt Barreto, a prominent Latino pollster at the University of Washington. "The political world has been very slow to change."

A more subtle point is the merger over time of the sympathies of journalists and marketers. In Ben Hecht's day, reporters tended to be cynical wiseacres, but today they tend to view marketing campaigns the way movie fanboys view marketing campaigns for summer blockbusters: as enthusiasts, as admirers of the arts of trailer trickery, whose only objection is that they think they, personally, could do an even more awesome job.

Romney's campaign has released two Spanish-language video ads so far — "Día Uno" and "Van Bien?" — but both are directly translated from identical ads in English, a blunder in Spanish-language marketing, said Glenn Llopis, founder of the Center for Hispanic Leadership.

"You can't just translate these things," Llopis said. "That's where a lot of these marketing things go wrong. They need to be customized, form-fitted. If the Hispanic community thinks you're just translating and not creating a campaign that speaks to them, they'll just shut off."

Glenn Llopis could no doubt provide the Romney campaign with a list of friends and relatives of his they could hire.

The ads also don't talk about issues such as healthcare and education that are important to Latino voters, many of whom are uninsured and benefit from policies such as Obama's healthcare law.

Obviously, Romney should hire a whole bunch of Hispanic marketing experts who, at vast expense, would come up with a brilliant marketing plan of some sort to delude Hispanics into voting against their rational self-interests.

Seriously, having looked at countless polls of Latino voters over the years, they strike me as far more sensibly straight-forward voters than white people. The majority of Hispanics vote for the tax and spend / affirmative action party because they net benefit from the Democrats' tax and spend and affirmative action policies. Further, Hispanic voters seem relatively immune to the complex semi-self-deluded meta-reasons that white voters are prone to, which makes whites such fascinating prey for political marketers.

What's more, some of the phrases in those ads are awkwardly translated, said Melisa Diaz, a Latino media consultant based inWashington, D.C., who has worked for the Democratic National Committee.

"Doing Fine?" would be more accurately translated as "Las cosas están bien?" Diaz said, while the proper phrase to convey "the right direction" would be "la dirección correcta," not "la buena dirección," as used in the ads. And the English idiom "Day One" would be better if phrased "El Primer Día," not "Día Uno," Diaz said.

"These kind of mistakes would not happen in an English-language ad," she said. "You can tell that the ads were not proofed by a native speaker."

"In every way, he's not really courting the Latino vote," Barreto said. "He's doing as little as possible."

That includes spending — Romney spent just $33,000 on Spanish-language ads between mid-April and mid-June in the battleground states of North Carolina and Ohio, while Obama spent $1.7 million over the same period, according to SMG-Delta.

Maybe, I'm out of date on business arrangements, but the traditional way it worked was that political consultants also own agencies that bought advertising space in the media. Indeed, a main source of compensation was for them to pocket 15% of the ad budget in return for placing the ad buys. Not surprisingly, that gives these "experts" an incentive to advocate spending more on ads.

Here's a more interesting part of the article:

Perhaps the Romney campaign is paying close attention to studies that show advertising in Spanish can turn off white and black voters. When white and black audiences saw ads with a Latino endorsement or in Spanish, their support for a candidate dropped, said Ricardo Ramirez, a professor of political science at Notre Dame.

"We know that appearing more inclusive by outreaching toward Latinos seems to work well for immigrants, but it seems to have a negative impact on blacks and whites," he said.

Who make up close to 7/8ths of the voters.