Moral Of The HAMILTON Hate Fest: These Goodwhites Are Nasty Pieces Of Work 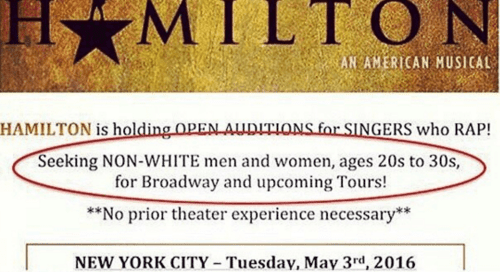 In case you've just emerged after a year and a half in a sensory-deprivation tank, Hamilton is a musical about Alexander Hamilton and the American Revolution, with an almost entirely nonwhite cast and the music in negro modes—Rhythm'n'Blues and Hip Hop.

Gregory Hood in his scathing review [‘Hamilton’ as the Ultimate Expression of the System, American Renaissance, April 25, 2016] told us that Hamilton’s audience is "overwhelmingly white." This raises all sorts of awkward questions that Goodwhites seem not capable of asking. For example: Isn't Hamilton just a Minstrel Show? Doesn't the phrase "cultural appropriation" apply? Would a show about the Civil Rights movement with an all-white cast—Johnny Depp playing Martin Luther King, perhaps—be acceptable? 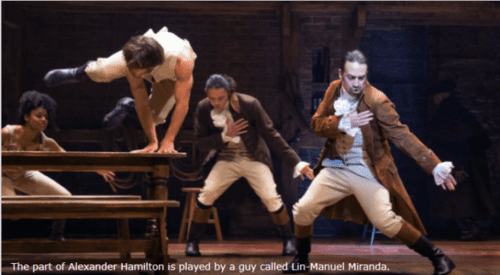 Well, I'll leave you to ponder these deep issues among yourselves I don't personally care about them. Artists must experiment, or we never find new ways of amusing ourselves.

Admittedly, we do seem to be in an unfortunate era of history where the experiments rarely deliver anything lasting. Gerald Freedman staged a production of Titus Andronicus set on the surface of the Moon; Jonathan Miller produced a Rigoletto with the Duke and his men as Mafiosi in New York's Little Italy.

As you can tell, I'm not myself a keen consumer of this sort of thing, but I don't see any principled objection to people trying it.

I haven't seen Hamilton and don't plan to. I've read just one other review: Rick Brookhiser's favorable one [Funky Founder,  NR, March 21, 2015 ] I've watched clips from some of the song-and-dance numbers on YouTube.

I still have no urge to buy a ticket for the thing, certainly not at the absurdly inflated prices I see quoted; not while Mozart, Verdi, Wagner, and—be still, my heart!—Bellini are on offer at the Met for half those prices.

That, however, is just the voice of a geezer who hasn't taken much interest in pop music since the Nixon administration, so don't take me as your entertainment guide.

The real interest of Hamilton for me is sociological. This Broadway musical is telling us something interesting about our culture, although I can't quite figure out what. Having attended this show is a status marker for Goodwhite gentry liberals. A ticket stub from Hamilton isn't just a showbiz souvenir—it's a Virtue Signal.

Hamilton was in the news recently because Vice President-elect Mike Pence attended a performance on Friday, November 18th, and was booed by the audience. 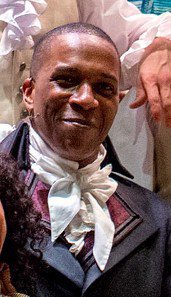 Then, after the curtain calls at the end of the performance, the black actor who plays Aaron Burr (right) came to stage front and read Pence a whiny little lecture about how, quote, "alarmed and anxious," nonwhite Americans are over Donald Trump's election. [‘Hamilton’ Had Some Unscripted Lines for Pence. Trump Wasn’t Happy., By Christopher Mele And Patrick Healy, NYT, November 19, 2016]

I thought he was going to beg the new administration to set aside some safe spaces. But he stopped short of that.

Mike Pence, who is the very soul of Midwestern Nice, took it all in good part.

I'm not sure that's the right approach.

To be lectured by a bunch of bubblehead actors is neither here nor there. They're actors. Who cares what they think?

But the behavior of the audience was disgraceful and I don't think niceness is the correct response. As George Orwell observed (writing between the Spanish Civil War and WW2): "If someone drops a bomb on your mother, go and drop two bombs on his mother."

That's more the New York spirit. I hope it's the Trump spirit.

Goodwhites pose as our moral superiors: so-o-o-o tolerant, open-minded, progressive, humane… But they are in fact, though, nasty pieces of work: vindictive, self-righteous, cruel, contemptuous of their fellow citizens.

The correct response to all that is not niceness, it's a good hard kick in the crotch.

Mike Pence's niceness seems in fact to be in danger of making him a standard target for Goodwhite contempt—an emblem, for them, of the flyover rubes whose Badwhite stupidity brought us President-elect Trump.

If you want to plumb the depths of that contempt—the sneering, seething disdain and loathing that Goodwhite elites feel for their fellow citizens—and if you have a strong stomach, I recommend to your attention the October 10th issue of New Yorker magazine: The Pences Visit Manhattan.

Note the date: this is from before the election.

It's a spoof piece mocking the naivety, religious faith, and provincial values of Mr. and Mrs. Pence. The opening two sentences give the basic idea:

Governor Mike Pence was having a romantic dinner with the love of his life, Mrs. Mike Pence, at the Red Lobster in Times Square. The Governor knew that as Vice-President he would have to attend foreign banquets, so he and Mrs. Pence were trying to broaden their palates.

It's downhill from there. Read the whole thing, if your stomach will take it, and if you can do so without running out into the street and smacking the first Goodwhite liberal you meet on his designer-stubbled jaw.

These are not nice people. Let's return to them the same contempt and loathing they feel for us.

Give me Noo Yawk nasty every time: HEY, JACKASS!