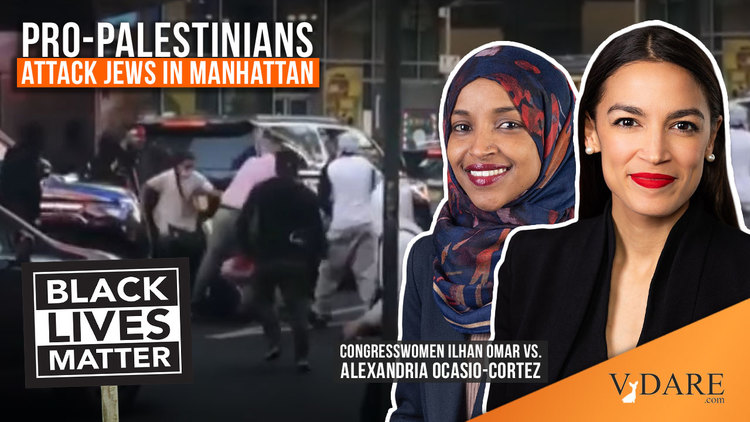 The latest clash between Israel and its Palestinian subjects has exposed a new fissure within the U.S. Left. New anti-white, hard-Left voices in the Democrat Party are demanding the U.S. stop supporting “colonizer” Israel. Historically, American Jews have been liberals who supported black causes, mass immigration and Israel, as did the neoconservative Jews who became influential in the GOP. Yet now blacks, immigrants and the Leftists they have elected are undercutting support for “America’s greatest ally” and Jews are being attacked in American streets.  This must be a rude awakening.

Some America First nationalists have tended to argue that blind support for Israel is not in the national interest. But that is decidedly not why the Left now hates Israel. One reason, naturally, is the old Marxist standby, “colonialism.” There’s also rising anti-white sentiment due to the unchallengeable moral hegemony of the Black Lives Matter movement; and the tipping of the Democrat Party and its Leftist auxiliaries because of Third World immigration.

“The fundamental unavoidable reality at the heart of this conflict is there is an asymmetry of power here,” Peacock (NBC’s streaming platform) host Mehdi Hasan said last week. “One side is the occupier. The other side is occupied.” (Hasan is an Indian Muslim immigrant born in Britain.)

Mohyeldin was born in Cairo—Egypt, not Illinois.

Settler colonialism is a form of colonialism that seeks to replace the native population of the colonised land with a new society of settlers.

Israel did not exist until 73 years ago when they were a settler colony that took over Palestine and have been violently maintaining their position ever since. If you don’t know this history here is a good primer to get you started: https://t.co/CoDp1yUkDj pic.twitter.com/cSLL17Aepe

Of course, this sounds a lot like the things Leftists have long said about the United States: white Europeans “replaced” so-called Native Americans etc. etc. But now the Left is saying the same about Israel, and its top spokesmen don’t want the U.S. supporting it.

Influential Democrat Reps. Ilhan Omar, Rashida Tlaib, and Alexandria Ocasio-Cortez, for instance, decry America for supporting the “colonizers” and back legislation to stop arms sales to Israel [Is the US-Israel alliance doomed?, by Zack Beauchamp, Vox, May 20, 2021].

But then decided she had better denounce recent violence against Jews in New York and elsewhere.

We will never, ever tolerate antisemitism here in NY or anywhere in the world.

The recent surge in attacks is horrifying. We stand with our Jewish communities in condemning this violence.

And who are these three? They are, in a nutshell, Third Worlders who aren’t in any sense Americans or even vaguely connected to the West. Omar is Somali refugee who says living in America is an “everyday assault.” The angry, foul-mouthed Tlaib is the daughter of Palestinian immigrants. Their hatred of Israel has always been open. AOC was born in the U.S. to parents of Puerto Rican stock, which means they weren’t really Americans either.

Recall that the late Charles Krauthammer wondered why anti-Semitism was rising in Europe. Many of his fellow neocons undoubtedly wonder why it is rising in the United States today. Because the likes of Omar are elected to Congress. To rework James Carville’s famous utterance, it’s the immigration, stupid! 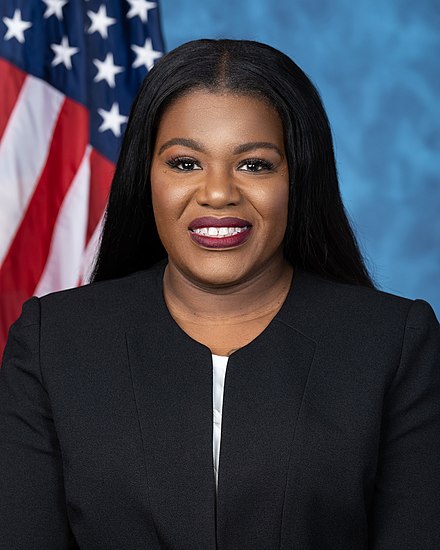 Then there’s the rising power of Leftist blacks who see everything through the prism of race. Missouri Rep. Cori Bush, right, a BLM organizer, for instance, connects racial causes in America with those of Palestine:

“We’re saying that our own government is funding a brutal and militarized disposition towards our very existence—from Ferguson to Palestine.”

Palestinians are fellow “POC” and must be defended. This view is also shared by New York Rep. Jamaal Bowman, right, who says he understands what it means to live in a society designed to perpetuate violence against “people who look like me” [How Black Lives Matter changed the U.S. debate on the Mideast, by Sean Sullivan and Cleve R. Wootson Jr., Washington Post, May 22, 2021].

BLM even issued a statement of “solidarity” with Palestinians this week:

We are a movement committed to ending settler colonialism in all forms and will continue to advocate for Palestinian liberation. (always have. And always will be). #freepalestine.

Black Lives Matter stands in solidarity with Palestinians. We are a movement committed to ending settler colonialism in all forms and will continue to advocate for Palestinian liberation. ( always have. And always will be ). #freepalestine

I am deeply troubled by reports of Israeli military actions that resulted in the death of innocent civilians in Gaza as well as Israeli targeting of buildings housing international media outlets.

[As violence erupts, support for Israel no longer unequivocal among some NJ politicians, by Hannan Adely, NorthJersey.com, May 20, 2021].

President Joe Biden, previously reliably pro-Israel, felt the heat and melted. When Tlaib got in his face, he caved and insisted Israel must cease hostilities and work toward a ceasefire with the Palestinians [Rashida Tlaib pressed Biden to take stronger stance with Israel, and then he did, by Mark Moore, New York Post, May 19, 2021]. It appears that Prime Minister Benjamin Netanyahu agreed to Biden’s request.

Meanwhile, tens of thousands of people demonstrated against Israel’s actions across America. Many were Muslim immigrants bolstered by their ever-increasing numbers [People across the US join pro-Palestinian protests, by Alisha Ebrahimji, CNN, May 18, 2021]. In a manner similar to BLM and Antifa goons who staged the Floyd Hoax riots, and attacked police and innocent bystanders, Muslims in Los Angeles and New York hunted down and beat up Jews.

🚨🚨 Tonight pro-Palestinian individuals were driving with megaphones around La Cienega & Beverly (a heavily Jewish area) in Los Angeles and threw objects at Jews at a restaurant table. Some threw things back.

The pro-Palestinian group came to the sidewalk to fight.

Israel has also faced criticism for deporting Africans and other unwanted foreigners. Critics in the U.S. says that’s not Jewish and demand Israel become a refuge for all [Israel Moves to Expel Africans. Critics Say That’s Not Jewish, by Isabel Kershner, New York Times, February 2, 2018].

The base of the party is moving in a very different direction than where the party establishment is. If you support BLM, it was not a difficult leap to saying Palestinian lives matter, too.

[Tensions Among Democrats Grow Over Israel as the Left Defends Palestinians, by Lisa Lerer and Jennifer Medina, New York Times, May 15, 2021]

Zogby isn’t alone. “The rise of identity politics made this almost inevitable,” Daniel Gordis, senior vice president at the Shalem College in Jerusalem, told Lerer and Medina. “It looks like weak against the strong, the disenfranchised against the enfranchised, the stateless against the state.”

But the “rise of identity politics” occurred because the Democrat base of voters is increasingly young and non-white, two demographics that don’t care for Israel.

Solid surveys on the topic based on race are rare, but the few that exist show an interesting picture. A 2014 survey found that blacks and Hispanics were more likely to blame Israel than Hamas for hostilities. Nearly half of whites blamed Hamas, while only 14% blamed Israel. More Hispanics blamed Israel, 35–30, while blacks were nearly evenly split: 27% blamed Hamas, 25% blamed Israel. A plurality of young people 18 through 29 years old faulted Israel. Most Americans 65 or older blamed Hamas [Americans still support Israel, but views vary by age and race, by Gram Slattery, Christian Science Monitor, July 29, 2014].

The differences are even greater today. Blacks are more likely to side with the Palestinians than Israelis, 21% -10%, while Hispanics are only slightly more likely to favor the Israelis, 23–17. Whites, on the other hand, favor Israel by more than 20 points. This change follows for Democrats as a whole. Democrats only slightly favor Israelis over Palestinians, 43–38. Most Democrats also believe America must exert more pressure on the Israelis to establish regional peace, and 67% favor Palestinian statehood.

In contrast, 80% of Republicans side with the Israelis; 65% believe America must exert more pressure on the Palestinians. A majority oppose Palestinian statehood [Americans Still Favor Israel While Warming to Palestinians, by Lydia Saad, Gallup, May 19, 2021].

Even among Jews the differences are stark. Two-thirds of Jews aged 65 and older identify strongly with Israel; only 48% of Jews 30 years old or younger share that attachment. Many young Jews say they suffer from an “identity crisis” over the recent conflict: they see the similarities between BLM and the Palestinian cause. Younger Jews are also more likely to identity as non-white [Gaza Conflict Stokes ‘Identity Crisis’ for Young American Jews, by Elizabeth Dias and Ruth Graham, New York Times, May 19, 2021].

As America becomes less white, fewer of its people will support Israel. This must be bitter news for neocon immigration boosters like Bill Kristol. They thought their Invade The World/Invite The World strategy would make Israel safer. Instead, it made their favorite state much more vulnerable. We would not have random Jews being attacked in the streets if it weren’t for mass immigration and the BLM-ification of the Left.

These political consequences need not threaten the integrity of the state (polity)—just its foreign policy.

Well, now American Zionists face an imported competing ethnic lobby. Will the U.S. turn against Israel like it did against South Africa?

The American Left’s anti-white racism doesn’t just apply to the Historic American Nation—it encompasses the whole world. There are no more exceptions to their rule. Even nations that don’t see themselves as white have to abide by their rules. Oppressed non-whites are good; oppressor whites are bad.

On present course, there will come a time when Zionists wish they had supported the Historic American Nation rather than helped replace it.