Memo From Middle America: Hurricane Crisis Actually An Opportunity—Kick Puerto Rico Out Of U.S., Get Serious About U.S. Citizenship!

Just like Hurricane Katrina in New Orleans, Hurricane Maria in Puerto Rico was as much a political disaster as a natural one. And the disturbing aftermath of the catastrophe shows it is time to rethink our relationship with Puerto Rico—preferably by giving them independence.

Even as America is funneling huge amounts of money towards Puerto Rico, commentators are openly urging Puerto Ricans (who are U.S. citizens) to move to the mainland and wage demographic warfare against the president.

Consider Hispanic Republican (!)  Ana Navarro, who describes herself as “Nicaraguan by birth. American by choice”—her choice, not ours.

Puerto Ricans can't vote for President on island. But can, if move to mainland. #Maria might do, what Hillary couldn't. Beat Trump in FLA. https://t.co/ljaBW7zVb4

Ppl of 🇵🇷, if you flee devastation & come to mainland, hope you settle in a swing state- FL, PA, OH... Register to vote & don't forget this! https://t.co/bkKYlZOKg1

This relationship of hostile dependency should prompt Americans to reevaluate the long-ignored status of our island territory. Even before the hurricane, Puerto Rico faced plenty of problems, especially its massive debt.

Indeed, the aforementioned Mayor Cruz recently appeared with Congressman Luis Gutierrez in Washington D.C. to slam Trump both for offering insufficient aid and not stopping a plan to restructure the island’s debt which was imposed before the hurricane.  [San Juan Mayor Carmen Yulin Cruz to Trump: You Can't Handle the Truth, by Suzanne Gamboa, NBC, November 1, 2017]

In the past, Cruz has argued for Puerto Rico to have more control over its economic affairs, including the ability to “reorganize under bankruptcy laws and thereafter enter into commercial agreements with other countries” [Trump called San Juan’s mayor a weak leader. Here’s what her leadership looks like, by Arelis R. Hernández, Samantha Schmidt, Avi Selk and William Wan, Washington Post, September 30, 2017]

“Puerto Rico has been denied these tools far too long… and as long as our options are defined by the powers of this Congress, we will always be at your mercy. The measure of our success will always be limited by the vastness of your control over our affairs.”

This may be a legitimate point. But of course, there’s an easy way for Puerto Rico to have full control over its affairs. Give Puerto Rico independence.

This may be what Mayor Cruz really wants anyway.

According to Ken Oliver-Mendez, former assistant secretary of state of Puerto Rico and current director of Media Research Center Latino:

[San Juan Mayor Feuding With Trump Turned Her Back When Asked to Swear to Uphold the Constitution,  by Rachel del Guidice, The Daily Signal, October 4, 2017]

On that point, I agree with Mayor Cruz. I support Puerto Rican independence, on the grounds that it’s a distinct society. 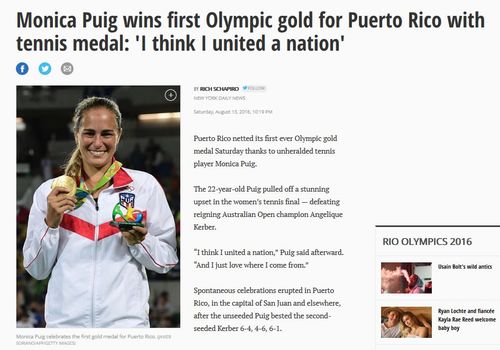 It should be noted the majority of Puerto Ricans have never voted for statehood. They seem satisfied with their current status. Puerto Rico is autonomous, makes its own laws and even has its own Olympic team.

But when there’s a disaster, there’s always Uncle Sam to bail them out. Puerto Rico wants to have its cake and eat it too.

This has gone far enough, especially when American largesse seems to only reap bitterness and resentment. The United States should work to help Puerto Rico in the wake of this disaster—but it should also facilitate a permanent separation beneficial to both nations. No hard feelings.

But the citizenship issue will be the most difficult. All Puerto Ricans are born American citizens, and that’s been the situation for a century. Yet Puerto Rican independence can’t result in an island of dual nationals entitled to both Puerto Rican and American citizenship, passed on perpetually to all succeeding generations. Some sort of transitional period would be necessary to sort out these issues.

More broadly, our entire citizenship policy is in shambles and in desperate need of reform. Our current system, plagued with irrational policies such as “birthright citizenship,” the growing numbers of dual citizens, and the constant demands to grant citizenship to illegals, is confusing and contradictory. It must be reformed  in order to support American sovereignty and identity.

Puerto Rican independence isn’t just an opportunity to break a cycle of resentment and dependence. It creates an opening for a broader effort to protect American citizenship.  We should help Puerto Rico recover from natural disaster. But after that, we should cut them loose and work to repair the immigration and citizenship disaster we have inflicted on ourselves.