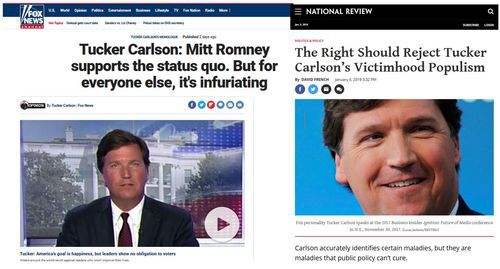 A Reader Asks Why, Given That NRO Is DEFENDING The Liberal Establishment From Tucker Carlson, They Continue To Exist As A Conservative Magazine?

From: An An Old School Conservative [Email him]

I turned on my computer this Saturday morning and saw two(!) hit pieces on Tucker Carlson in NRO for his daring to challenge Mitt Romney's beyond obnoxious Washington Post op-ed and the establishment's "status quo" in American politics.

Particularity offensive was David French's article that was essentially a defense of the establishment, with only a slight castigation here and there.  You know, the David French that was almost Bill Kristol's pawn to run for president to ensure a Hillary Clinton victory. (See James Fulford's Bill Kristol’s NRO Candidate David French—A Major, For God’s Sake?)

Typical of French's approach in the article was for Americans to quit whining about the liberal establishment's unfair policies and charge forward regardless:

"I agree with Carlson that more radical forms of feminism have turned too many of our institutions against boys. I agree that affirmative action based on skin color is divisive, unconstitutional, and unfair. But while these policies and cultural trends may create impediments to personal success, these impediments are speedbumps—not impenetrable barriers."

However, if French's and National Review's approach is essentially benign acceptance of the liberal establishment and globalism then what is the reason for the existence of National Review anyway?  The answer is obvious, as it has been for decades now, that National Review is to be the gatekeeper of the right attempting to channel, if not actually block, any serious challenge from the right to the liberal hegemony in our nation.  Thus defining the right as controlled opposition, and effectively complicit in sustaining the policies it purports to oppose.  Such an article from French demonstrates the frustration in not being able to accomplish that goal anymore.  And for that I am ecstatic.