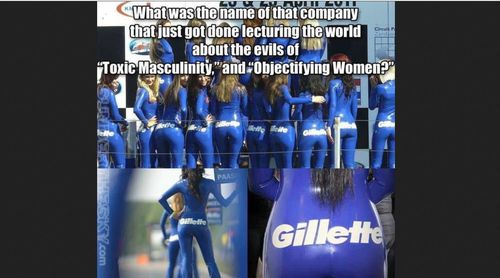 Masculinity is under attack. The American Psychological Association was long ago taken over by the Left, so the APA’s bizarre recent guidelines claiming that “Traditional Masculinity” is psychologically harmful to males and implying that by males should be encouraged to be feminine, shouldn’t be that much of a surprise [Psychologists call ‘traditional masculinity’ harmful, face uproar from conservatives, By Alia Dastagir, USA Today, January 10, 2019,  . And nor it should be a surprise that this statement is absolute nonsense.

According to APA—which is so scientifically neutral that it has previously passed resolutions in favor of same sex marriage—“Traditional Masculinity” is defined as “a particular constellation of standards that have held sway over large segments of the population, including: anti-femininity, achievement, eschewal of the appearance of weakness, and adventure, risk, and violence.”

The guidelines [PDF] published in the January issue of the APA’s magazine Monitor on Psychology assert that pressure, on boys and men, to conform to traditional masculinity leads to poor health outcomes, high rates of suicide, substance abuse, violence, premature death and suicide, in comparison to females, who feel no such pressure. [CE Corner: APA Issues First-Ever Guidelines For Practice With Men And Boys, by Stephanie Pappas, Monitor on Psychology, January 2019]

Pappas begins by wondering aloud why, considering the high levels of male achievement in comparison to female, guidelines should be necessary on masculinity at all. She then asserts—and you really have to read the whole thing to pick up on the brilliant sleight of hand—that

The main thrust of the subsequent research is that traditional masculinity—marked by stoicism, competitiveness, dominance and aggression—is, on the whole, harmful. Men socialized in this way are less likely to engage in healthy behaviors. For example, a 2011 study led by Kristen Springer, PhD, of Rutgers University, found that men with the strongest beliefs about masculinity were only half as likely as men with more moderate masculine beliefs to get preventive health care (Journal of Health and Social Behavior, Vol. 52, No. 2). And in 2007, researchers led by James Mahalik, PhD, of Boston College, found that the more men conformed to masculine norms, the more likely they were to consider as normal risky health behaviors such as heavy drinking, using tobacco and avoiding vegetables, and to engage in these risky behaviors themselves (Social Science and Medicine, Vol. 64, No. 11).

Did you pick up on the trick, worthy of Penn and Teller? Pappas commences by implying that people who are brought up to be masculine later manifest various poor life outcomes. But all that research really indicates: these poor life outcomes are associated with masculine males. These “masculine males” could quite easily have ended up as such even if they’d been raised by females who had made them wear pink dresses throughout their childhood.

Reason: the key personality traits on which males differ from females—altruism and impulse control, where in both cases males score much lower—are somewhere in the region of 50% to 70% genetic. (See At Our Wits’ End: Why We’re Becoming Less Intelligent and What It Means for the Future, by Edward Dutton and Michael Woodley of Menie, 2018.)

This is why a boy whose penis was accidentally destroyed as a baby and was duly surgically remade into a “girl,” felt an overwhelming desire to be a boy on reaching puberty. [Health Check: The boy who was raised a girl, BBC News, November 23, 2010] This “girl” was flooded with testosterone, higher testosterone being the key factor behind masculinity and behind such “Traditionally Masculine” traits as drive and competitiveness. [Testosterone causes both prosocial and antisocial status-enhancing behaviors in human males, by Jean-Claude Dreher et al., PNAS, 2016]

Masculinized females—who have masculine interests, looks, personalities, thought patterns and even sexual proclivities—tend to be high in testosterone. [The extreme male brain theory of autism, by Simon Baron-Cohen, Trends in Cognitive Sciences, 2002]

It is testosterone that is causally associated with all of the problematic behavior which the ASA assert are examples of “Traditional Masculinity.” Testosterone is associated with poor impulse control, meaning those high in it are more prone to become addicted to drugs. It is additionally correlated with low altruism, meaning high-T men are more likely to be violent, get into fights, commit crime and end up in prison. It is both directly and indirectly associated with poor health because, on the hand, addiction-prone, impulsive people are more likely to take risks, including with their health, while, on the other hand, high-T is correlated with conditions such as heart disease, meaning that men die younger. [Testosterone and cardiovascular health, by Andrew Elagazi et al., Mayo Clinical Proceedings, 2017]

Even having “strong beliefs” about sex roles is likely to be a function of testosterone because people who are high in Agreeableness (and thus low in testosterone) tend not to be opinionated. [Examining the Relations Among Narcissism, Impulsivity, and Self-Defeating Behaviors, by Joshua Miller et al., Journal of Personality, 2009]

The APA also highlights a particularly masculine culture among blacks, which it claims leads to very pronounced levels of violence and criminality among black males. Of course, they forget the simpler explanation: black males have higher testosterone levels than white males; they are more “masculine”. [Race, Evolution and Behavior, By J. Philippe Rushton, 1995]

Pappas’s propaganda is simply an attempt to undermine male self-confidence; to tell males that masculinity is bad, that something has to be done about it.

But it is equally true that the reason for high male achievement is also “Traditional Masculinity.” One recent study took markers of testosterone at a national level—such as number of life time sexual partners, intercourse frequency, how man-like on average is the hand shape, the average hairiness of the fingers, the population frequency of alleles associated with testosterone and various other measures—and correlated these with national per capita levels of genius, as defined by per capita science Nobel prize achievement. [National-Level indicators of androgens are related to the global distribution of number of scientific publications and science Nobel prizes, By Dimitri Van der Linden et al., Journal of Creative Behavior, 2018] The study found that one you substantially control for national IQ—by only looking at countries with an IQ of over 90—average national testosterone level (in other words, average masculinity level) predicts per capita science Nobel Prize achievement.

Males must not be ashamed of being males. The downside of being male is inseparable from the upside: the fact that it is men who have been responsible for pretty much anything of consequence ever accomplished by human race.