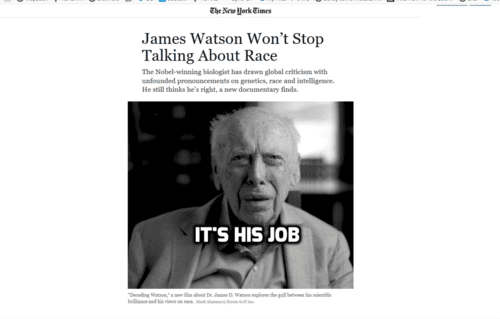 Meet the new year, same as the old year … From the New York Times’ news (not opinion) section:

“Decoding Watson,” a new film about Dr. James D. Watson explores the gulf between his scientific brilliance and his views on race.

It has been more than a decade since James D. Watson, a founder of modern genetics, landed in a kind of professional exile by suggesting that black people are intrinsically less intelligent than whites.

In 2007, Dr. Watson, who shared a 1962 Nobel Prize for describing the double-helix structure of DNA, told a British journalist that he was “inherently gloomy about the prospect of Africa” because “all our social policies are based on the fact that their intelligence is the same as ours, whereas all the testing says, not really.”

Moreover, he added, although he wished everyone were equal, “people who have to deal with black employees find this not true.”

Watson was likely referring to a major effort he had made to employ blacks from the slums as lab techs and the like.

Dr. Watson’s comments reverberated around the world, and he was forced to retire from his job as chancellor of the Cold Spring Harbor Laboratory on Long Island, although he retains an office there.

He apologized publicly and “unreservedly,’’ and in later interviews he sometimes suggested that he had been playing the provocateur — his trademark role — or had not understood that his comments would be made public.

Ever since, Dr. Watson, 90, has been largely absent from the public eye. His speaking invitations evaporated. In 2014, he became the first living Nobelist to sell his medal, citing a depleted income from having been designated a “nonperson.’’

But his remarks have lingered. They have been invoked to support white supremacist views, and scientists routinely excoriate Dr. Watson when his name surfaces on social media.

Eric Lander, the director of the Broad Institute of M.I.T. and Harvard, elicited an outcry last spring with a toast he made to Dr. Watson’s involvement in the early days of the Human Genome Project. Dr. Lander quickly apologized.

“I reject his views as despicable,” Dr. Lander wrote to Broad scientists. “They have no place in science, which must welcome everyone. I was wrong to toast, and I’m sorry.’’

And yet, offered the chance recently to recast a tarnished legacy, Dr. Watson has chosen to reaffirm it, this time on camera. In a new documentary, “American Masters: Decoding Watson,’’ to be broadcast on P.B.S. on Wednesday night, he is asked whether his views about the relationship between race and intelligence have changed.

“No,’’ Dr. Watson said. “Not at all. I would like for them to have changed, that there be new knowledge that says that your nurture is much more important than nature. But I haven’t seen any knowledge. And there’s a difference on the average between blacks and whites on I.Q. tests. I would say the difference is, it’s genetic.’’

Dr. Watson adds that he takes no pleasure in “the difference between blacks and whites’’ and wishes it didn’t exist. “It’s awful, just like it’s awful for schizophrenics,’’ he says. (His son Rufus was diagnosed in his teens with schizophrenia.) Dr. Watson continues: “If the difference exists, we have to ask ourselves, how can we try and make it better?”

Dr. Watson’s remarks may well ignite another firestorm of criticism.

By the way, if you decide to send out dissenting tweets on this topic, please don’t copy Amy Harmon on them, because she will just use them to write a pity party follow-up article about how her New York Times article intended to “ignite another firestorm of criticism” of an infirm 90 year old scientist led to her receiving unappreciative tweets in her Notifications: that is Hate. In contrast, ginning up a Two-Minutes Hate against James D. Watson in the New York Times is Responsible Journalism.

At the very least, they will pose a challenge for historians when they take the measure of the man: How should such fundamentally unsound views be weighed against his extraordinary scientific contributions?

In response to questions from The Times, Dr. Francis Collins, the director of the National Institutes of Health, said that most experts on intelligence “consider any black-white differences in I.Q. testing to arise primarily from environmental, not genetic, differences.”

No. Most experts on intelligence consider it an open question without a firm answer yet.

Here are some things I’ve written about Watson over the years: