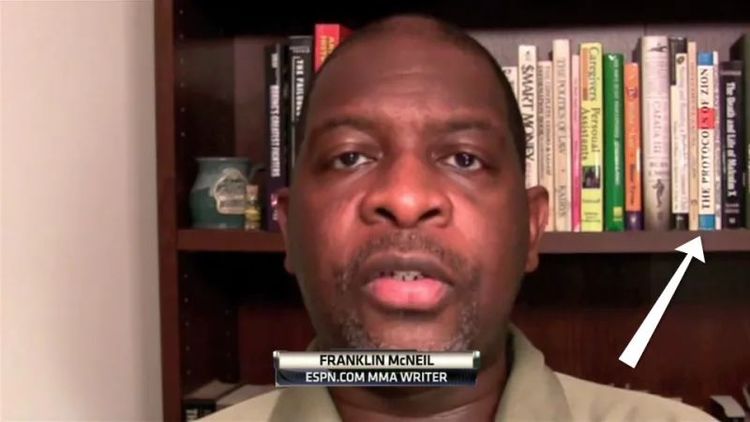 Don't Let The Media Photograph You In Front Of Your Bookshelf!

I must admit, I do this too—when a writer is photographed on the back of a book jacket infront of his bookshelf, I turn the book on its side, and try to read the titles. But I don't want other people doing that to me.

Look what happened to Franklin McNeil, a black sportswriter for ESPN:

ESPN Writer Has The Protocols Of Zion On His Bookshelf

Late last week, ESPN's MMA writer Franklin McNeil appeared on an ESPN.com video previewing the big UFC pay-per-view fight between Jon Jones and Rashad Evans. In the video, McNeil talked about the bout while sitting in front of his bookshelf at his home. Clever D.I.Y. stagecraft! (Just a few weeks ago, an ESPN anchor called him "studious" right after he appeared in front of that bookshelf.)

And what does McNeil have in his bookshelf? In the screencap above, we can see The Politics of Law ("An excellent collection"—Library Journal) and The Death and Life of Malcolm X ("An ambitious study"—Kirkus). And there's a blue-and-white book spine that reads The Protocols of Zion, which may or may not be a version of the Protocols of the Elders of Zion ("A classic in paranoid, racist literature, and the most notorious forgery of modern times"—Anti-Defamation League).

It would surprise me not at all if a black sportswriter had an anti-Semitic book on his shelf. Anti-Semitism is common among blacks, and the Protocols  is  a big seller at Black Muslim conferences.

It would equally not surprise me if he had an anti-anti-Semitic book, based on Marc Levin's 2005 documentary, "The Protocols of Zion"—being an "anti-racist" and a left-wing Democrat is even more common among blacks than anti-Semitism.

What I know for sure is that he probably had to find an explanation pretty quickly—ESPN has a history of firing people who get out line on racial issues.

Here are three books that won't get him introuble. The first two are named by Deadspin, above as innocuous, the third is a book on "reparations" I noticed myself in the YouTube video where McNeil was called "studious."

These are all racially charged books, but they're just plain anti-white, not anti-Semitic. And since the blog post above is a month old, and McNeil still has his job, it looks like it's a case of "Why Do Only Whites Lose Jobs Over Racial Remarks?"