John Derbyshire: The Telford Child Sex Scandal And The End Of England

I've got to assume that very few Americans ever heard of Telford, a district in the English West Midlands. Steve Sailer admits to never having heard of it; and if Steve hasn't heard of it, nobody has.

This is excusable. There was no such place as Telford until 1968. That was when bureaucratic managerialism in Britain was in the ascendant. Ancient towns and villages were being grouped together in strange new entities under stone-faced administrators filled with a conviction of their own managerial competence. Britain's old counties were reorganized to suit the inclinations and convenience of these mandarins, and people were shoveled around like so many truckloads of concrete.

Shortly afterwards Britain entered the European Union, and those British mandarins, to their delight, became globalist apparatchiks, with way bigger expense accounts. They must have had many a laugh with each other, over the champagne and truffles, at how easy it had been.

It was the end of old England. Mass Third World immigration was a key component of the new order. British people who dared to raise their voices against what was happening—people like Enoch Powell—were insulted, abused, and hounded out of public life.

Telford was, in other words, created out of thin air just as Britain's modern Cultural Revolution was gathering steam: the revolution that turned an ancient, proud, dynamic, and distinctive nation into the third-rate multicultural slum we see today—Cuck Island.

Let's be grateful for small mercies, though. At least the mandarins gave their new creation a name, when they probably would have preferred just to give it a number: "District 479," or perhaps "Airstrip One."

The name was a fine and honorable one, too—surely an oversight. This new district was named after Thomas Telford, the son of an illiterate shepherd in the rough border country where England meets Scotland—the ancestral home of our own "Scotch-Irish."

Thomas Telford became the greatest civil engineer of his time, the late eighteenth and early nineteenth century. The innumerable roads, bridges, and canals he built were the foundation for Britain's—and therefore the world's—Industrial Revolution. 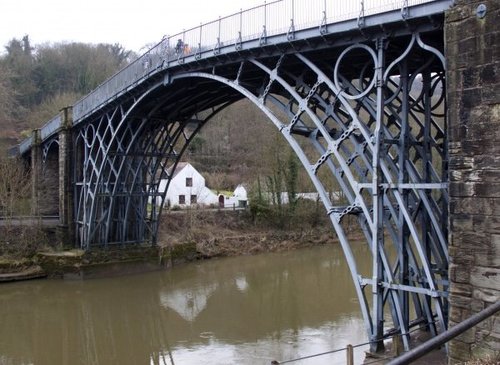 The region now called Telford was at the heart of the early Industrial Revolution. There are several excellent museums there covering the period. I strongly recommend a visit next time you are in England, especially if you have kids who need to know some history. Right nearby is the great Iron Bridge, opened in 1781—not one of Thomas Telford's, but the first bridge of any size, anywhere in the world, made out of iron.

My father grew up Oakengates, five miles from the Iron Bridge. In Dad's childhood a hundred-odd years ago, Oakengates was a little coal-mining village. It's now been swallowed up in the Telford district. I spent time in my own childhood in and around Oakengates. Aged eight or nine, I climbed the Wrekin, which is what passes for a mountain in the flat West Midlands countryside—all of thirteen hundred feet high.

Some of these people were old-stock English proles that Charles Dickens would have recognized. Others were Third World immigrants: Muslims from Pakistan and Bangladesh, blacks from the Caribbean and Africa.

Up to 1,000 children could have been abused in Britain's biggest ever child abuse scandal, an investigation has revealed.

Hundreds of children, some as young as 11, are estimated to have been drugged, beaten and raped over a 40-year period in the town of Telford.

1,000 children may have been victims in Britain's biggest ever child abuse scandal,

Notice that key phrase: "over a 40-year period." In other words, no sooner was the cement dry on this new town of Telford, and the white proles and the Muslims moved into those gleaming new projects, than the Muslims were preying on the white girls.

It's the Rotherham scandal of five years ago all over again. And, as there, nobody much cared about these girls. From the point of view of the globalized mandarins and the middle-class social workers with degrees in Sociology from Cuck University, the girls were just white trash, totally lacking in the vibrancy and diversity that make a modern society worth living in.

Also, as in Rotherham—and in Nottingham, where Egyptian student Mariam Moustafa was just beaten to death by Third World savages—the police had no interest in investigating what was going on, much less in arresting and prosecuting the perpetrators. If they did show such interest, someone might call them RACIST. [Scream].

So British law enforcement won't pursue rapists and murderers who are black or Muslim. Doesn't that leave them with time on their hands, though? What do British cops and other law enforcers do all day long to justify their salaries?

This week we found out.

Speakers' Corner is an open area at the northeast corner of Hyde Park in west-central London. It's been famous for two hundred years as a spot where dissidents, political radicals, religious zealots, self-styled prophets, and just plain cranks can get up on a soapbox and say what's on their minds. Wikipedia says:

Speakers' Corner was frequented by Karl Marx, Vladimir Lenin, George Orwell, C. L. R. James, Walter Rodney, Ben Tillett, Marcus Garvey, Kwame Nkrumah, and William Morris… Its existence is frequently upheld as a demonstration of free speech, as anyone can turn up unannounced and talk on almost any subject, although always at the risk of being heckled by regulars.

Well, British dissident Tommy Robinson, who has made a name for himself as a critic of Islam, went to Speakers' Corner last weekend to get up on his soapbox and speak to anyone willing to listen. His subject, very apt for Speakers' Corner, was freedom of speech.

Tommy had barely cleared his throat when the Peelers showed up—at least four of them, in a squad car. They told him to pack up his soap box and leave, if he knew what was good for him. Tommy caught the whole episode on video.

Put this together with the episode at King's College in London that I reported on last week, and it's clear that the British authorities now regard freedom of speech to be a subversive notion—at any rate when the speech is directed against Islam.

Speakers' Corner may be in the news again this weekend. Sunday, March 18th, Tommy Robinson and other Dissident Right activists plan a rally there, again in support of free speech.

it would not be at all surprising if the British authorities found some way to forestall this Sunday gathering, quite possibly by just arresting all the dissidents.

Perhaps they'll commit them to mental hospitals, as the old Soviet Union used to do with theirs. I hope I'm not giving them any ideas here.

You can be sure at any rate that if the event isn't shut down in advance somehow, the Bobbies will be there in force to protect Britain's state religion—Islam.

It's not just the street cops, either. Britain's immigration officers are also fully invested in defending Islam against any criticism. Or rather—I'm straining to be fair here—are fully invested in trying to prevent the Muslim riots and terrorism they know would result if Britain's legacy population were to be allowed to vent their feelings about Muslim supremacy. 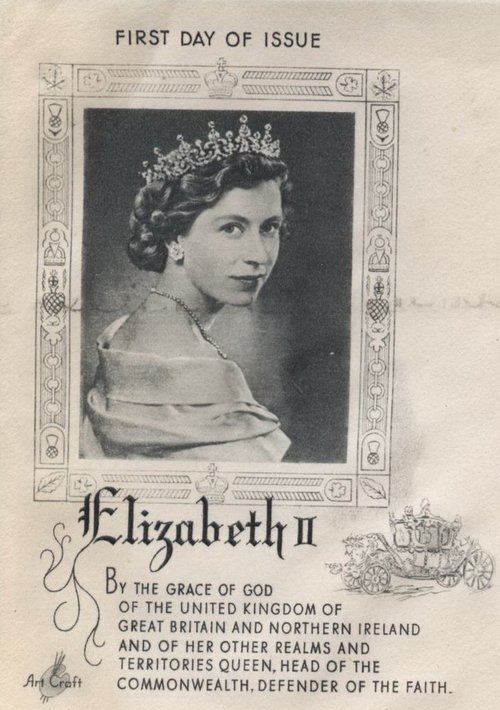 Last Friday, March 9, American Dissident Right activist Brittany Pettibone and her Austrian boyfriend Martin Sellner arrived at an airport near London to meet with Tommy Robinson and join him at this Sunday's event on Speakers' Corner. British immigration officers detained them for two days, then deported them.[ Why 3 far-right activists were refused entry to the UK, BBC, March 14, 2018]

A nice ironic touch here was that during the course of Ms. Southern's interrogation she was asked whether she was a Christian extremist. This, by law-enforcement officials of a nation which has Christianity as its state religion, and whose head of state is also head of the state church and Defender of the Faith.

You can't make this stuff up.

Brittany Pettibone tweeted an image of the letter given to her by British immigration as they booted her out, her "Notice of refusal of leave to enter." 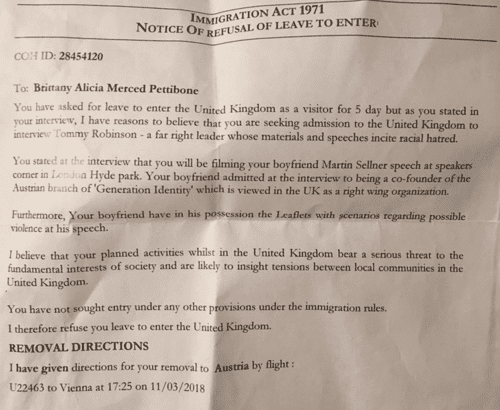 It is plain that the letter was composed by someone with limited English-language skills:

Furthermore, [comma] Your [capital "y"] boyfriend have [not "has"] in his possession the Leaflets [capital "l"] with scenarios regarding possible violence at his speech.

I believe that your planned activities … are likely to insight tensions …

If you have passed through British immigration recently you will know that the officials dealing with you do not much resemble Michael Caine or Helen Mirren. They are much more likely to resemble Idi Amin or Indira Gandhi.

My feelings about those incidents are somewhat mixed. I strongly support the right of any country to refuse entry to anyone, for any reason. I wish this country, the U.S.A., would refuse entry to a whole lot more people than it does.

The trouble is, of course, that the Pettibones, Sellners, and Southerns—mild-mannered middle-class white Americans, Austrians, and Canadians who seek to stop the demographic transformation of their countries—these are the only people the Brits turn away at their airports.

While immigration officials were spending several man-days interrogating these three, unknown hundreds of parasites and lunatics from the most benighted hell-holes of the Third World were being waved in to Britain with cheery smiles, given public housing, welfare benefits, and healthcare.

You're a committed Christian? Sorry, no entry. You trained with ISIS? Enjoy your stay! Here, take these welfare vouchers!

Let me just repeat that: He told the immigration officers he had trained with ISIS. 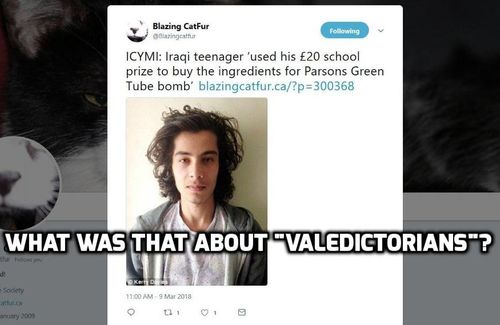 But Ahmed was not refused entry. Instead, he was given free accommodation, first in a charity shelter, then in a pleasant middle-class foster home. [Betrayed by the 'shy and polite' boy they took into their home: Iraqi asylum seeker, 18, is found guilty of trying to blow up 93 Parsons Green commuters with bomb built with his foster parents' Tupperware while pair were on holiday, Daily Mail, March 16, 2018] He was sent to school, at British taxpayer expense of course. His teachers reported him telling them it was his duty as a Muslim to hate Britain.

Today, Friday, March 16, 2018, Ahmed was convicted of making a bomb and trying to detonate it in a London subway train last Fall. Fortunately, the thing didn't explode properly; but it still left 51 subway passengers with serious burns.

Let me just repeat one more time: He told the immigration officers he had trained with ISIS.

Enoch Powell got it right: "Whom the Gods wish to destroy, they first make mad."