This is a new twist on the "Immigrant Valedictorian" thing, via BlazingCatFur on Twitter:

Here's the story from the Daily Mail:

Iraqi Ahmed Hassan, 18, is in court over the Parsons Green bomb Tube attack

In his first interview with immigration officials on January 18, 2016, Hassan said he had been trained to kill by jihadis with 1,000 other people, adding: 'They trained us on how to kill. It was all religious-based.'

But he claimed he went along with it only because he feared the fanatics could kill his family, and said he was claiming asylum in Britain because he was 'in fear of Islamic State', the court heard.

Prosecutor Alison Morgan described what Hassan – who had no identity documents to verify his name or age – said to immigration officials.

She said: 'He was forced to go on his own otherwise they would kill his family and he shared training with 1,000 people and they would spend three to four hours a day in the mosque.'

Here's Hassan being awarded a Student of The Year certificate—it came with a £20 voucher, which he applied to buying hydrogen peroxide to make a bomb: 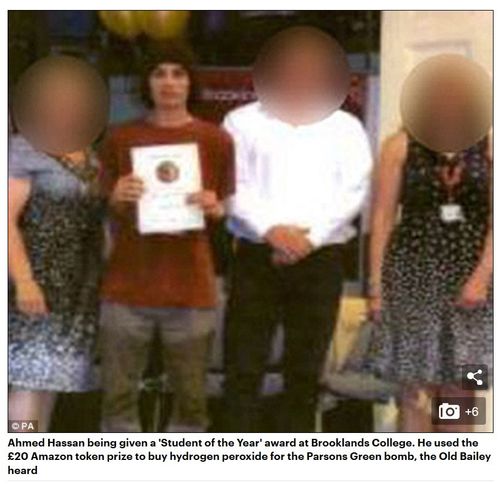 I wonder if he was really "Student Of The Year", or if they gave him credit for being a refugee?