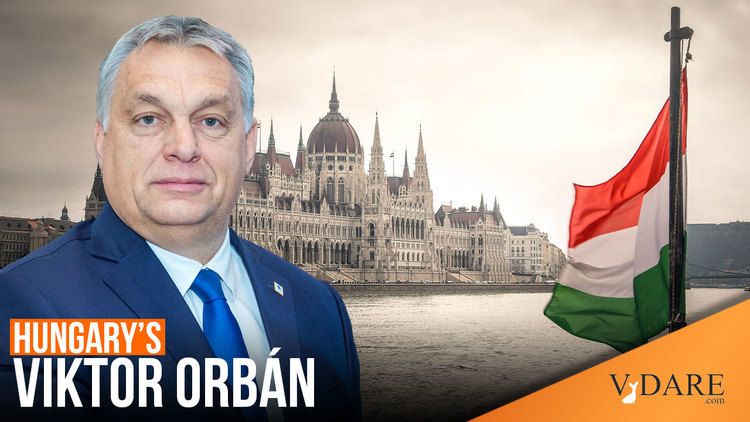 I'm happy to see that Hungary is in the news. Longtime readers and listeners know that I am a Hungarophile from way back. A quick scan of the Derb archives shows fond mentions of Hungary all the way back to April 2002. One of the longest reviews I've written in recent years was about a 20th-century Hungarian novelist. (The magazine that published that hasn't sent me a book to review in the five years since, I can't imagine why).

There are two reasons Hungary is in the news, a political reason and a media reason. The political reason is that the EU, the European Union—which, to a good first approximation, means Germany—is ganging up on the current Hungarian government under Viktor Orbán, who has been Prime Minister of Hungary for fifteen of the past nineteen years.

The media reason is that nationalist-conservative gadfly Tucker Carlson is in that country this week, broadcasting his nightly Fox News show from Budapest.

"Hungary's Leaders actually care about making sure their own ppl thrive. Instead of promising the nation's wealth to every illegal immigrant from the 3rd world they're using tax dollars to uplift their own ppl, imagine that." pic.twitter.com/0FvGBTQ1yf

Those two reasons have a common origin. Viktor Orbán has pursued a strongly National Conservative policy line. He has set his face firmly against mass Third World immigration and established secure national borders. Orbán's Hungary has strong natalist programs to encourage Hungarians to marry and have children. In June this year Hungary's National Assembly, with Orbán's encouragement, passed a law banning the promotion of homosexuality in school educational materials [Hungary passes law banning LGBT content in schools or kids’ TV, by Jennifer Rankin, Guardian, June 15, 2021]. Orbán has severely curtailed the propagandizing activities of George Soros … And so on.

Orbán's Hungary, in short, is an unapologetic beacon of National Conservatism. That's driving globalist Progressives crazy, both in Europe and here. The EU is threatening to cut off financial support for Hungary, even perhaps to expel Hungary from the EU if the country doesn't get in line with globalist-Progressive ideology. That's a real threat to Orbán.

Hungarians would like to stay Hungarian, without the blights of mass immigration and Heather Has Two Mommies textbooks in kindergarten.

On the other hand, they like being in the EU. Their country is comparatively poor, down there with Romania and Greece in the EU rankings of per capita GDP, and that financial support comes in handy. So, with employment opportunities limited, so does the ability to travel freely to work in other EU countries without passports and visas.

There's an election coming up next April, or theoretically even earlier, and the pro-EU forces are looking strong [Hungarian Finance Minister Revives Debate Over EU Membership, by   Zoltan Simon, Bloomberg, August 2, 2021]So the EU may have their way with Hungary after all.

And yes, our own globalist Progressives hate Orbán, too. "Hate" is in fact too mild a word for effusions like those of neocon David Frum on Twitter this week. Sample, quote:

When American media personalities express admiration for Orbán, that is what they are admiring: plunder of the public for the benefit of a complicit few; suppression of media that report the plunder; racism and reactionary religion as cover for the gullible and/or hypocritical.

Wow: "plunder of the public for the benefit of a complicit few; suppression of media that report the plunder." Nothing like that could happen here in the Land of the Brave and Home of the Free, could it? Excuse me … [cough, "Hunter Biden … laptop … cough].

Now, it's true that Orbán makes that kind of thing easier than it ought to be. Yes, he's too tolerant of corruption, especially when it enriches his own family and friends. But—and now I'm quoting, quote:

The unhappy truth is that liberalism as we Americans have known it is probably dead. Our future is almost certainly going to be left-illiberal or right-illiberal. It's not the future I would prefer, but we are not being given a choice here.

I took that from a brilliant piece by Rod Dreher at The American Conservative (Tucker To Hungary, Nixon To China, August 4, 2021). It's a long piece, four and a half thousand words including footnotes, but well worth your time and trouble.

"I had dinner with Tucker last night in Budapest."
A sentence from @roddreher somehow even more likely to break brains than usual...with their powers combined, etc. https://t.co/2mZiOVrW1d

Life, and especially political life, rarely offers perfection as one of your choices. Perfection in national leadership for me would be a leader who believes in and promotes National Conservatism and does all he can to stop the Cultural Revolution, while being personally frugal and honest, with no track record of enriching himself or his family from the public fisc. That would be perfection.

What if Rod Dreher is right, though? What if the choice we end up with is between an Orbán type, sincerely National Conservative all the way through, but not averse to putting his hand in the cookie jar now and then [Viktor Orbán is winning his culture war, by Rod Dreher, Spectator, August 3, 2021], up against, on the other hand, a willing tool of the nation-destroying revolutionary Left with just as sleazy a personal record?

I personally would not hesitate for very long, especially if the party of the second part there was incoherently senile.

Is Rod right? Is our future destined to be either right-illiberal or left-illiberal?

I'm afraid that sometimes this podcasting business brings out the college lecturer in me, and I send you away with a sheaf of recommended reading material.

Sorry about that, but there really is some first-rate deep commentary from a patriotic-conservative viewpoint—even, occasionally, a race-realist viewpoint—available nowadays on websites like American Greatness, UnHerd.com, Quillette, the aforementioned American Conservative, and others: not of course forgetting the still center about which all else turns, your own, your favorite, your mentor and guide, VDARE.com.

You won't of course agree with everything you read on every one of those outlets. Some of them cast their nets pretty wide. When I read something that really makes me stop and think, though, it's almost always from that general area of the blogosphere.

That's all by way of introduction to your next reading assignment, students—pay attention there at the back, please. Er, Sir, would you mind putting down your cellphone? … Thank you. 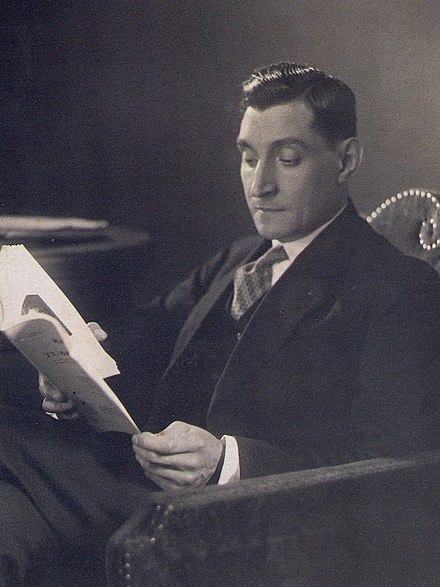 This is an August 1st piece by Christopher Roach at American Greatness: The Salazar Option. Antonio Salazar was the Prime Minister of Portugal for nearly forty years, through most of the 1930s, 1940s, 1950s, and 1960s.

In my own school and college years in England, Salazar was faintly present in the background of European politics. Educated youngsters like myself mentally yoked him together with Generalissimo Francisco Franco of Spain. "Fascist dictators," we muttered to ourselves, and moved on to some topic more interesting.

That was a ridiculously over-simplified view of things. Salazar and Franco both disliked fascists. Salazar put them in jail when he could, along with communists, who of course he also hated. Fascism was modern and anti-clerical: Salazar and Franco were reactionary and devoutly Catholic.

During World War II, Portugal was generous to refugees from further east in Europe; countless lives were saved. Portugal's ambassador to Nazi-occupied Hungary was arrested by the Gestapo for helping Jews escape.

No, Salazar and Franco weren't model parliamentary democrats, but they certainly weren't fascists, nor even totalitarians. I've lived in totalitarian countries, and I lived briefly in Franco's Spain: no comparison.

Roach groups Portugal together with Spain, Mexico, and France. All four, he argues, fell under the control of Progressive revolutionaries in the early 20th century. For Mexico and France the results were disastrous, the Left triumphant. But in Spain and Portugal, "self-conscious counterrevolutionary political movements stopped them cold during the 1920s and '30s."

Roach is not of course—of course—hoping for a non-democratic authoritarian police state on the model of Salazar's Portugal or Franco's Spain. He only wants to tell us that the revolutionary Left is relentless and ruthless, today just as much as a hundred years ago, and won't be defeated by gentlemanly forbearance and appeasement—which has basically been the posture of the Republican Party in recent decades. As he comments:

Thus, Trump did not clean house of his enemies in the government, nor have he and other Republicans done much—other than kvetch—at the hostile political interference of Big Finance and Big Tech.