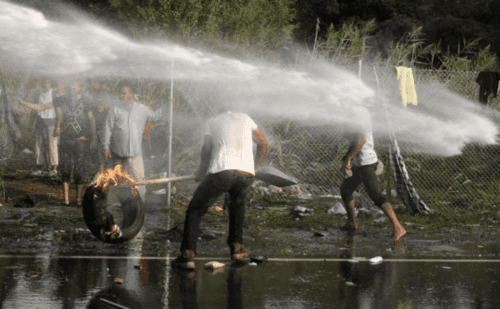 …the Hungarian premier is out accusing Soros of attempting to usurp "the European lifestyle." Here's more from Bloomberg:

Hungarian Prime Minister Viktor Orban accused billionaire investor George Soros of being a prominent member of a circle of "activists" trying to undermine European nations by supporting refugees heading to the continent from the Middle East and beyond.

"His name is perhaps the strongest example of those who support anything that weakens nation states, they support everything that changes the traditional European lifestyle," Orban said in an interview on public radio Kossuth.

Bloomberg confines itself to noting

Soros, who was born in Hungary and is one of the biggest philanthropists in eastern Europe via his foundations and university, gives grants to organizations that provide legal assistance to asylum seekers.

One wonders what other matters of national importance involve George Soros getting on the line with the US Treasury Secretary to arrange virtually unlimited funds courtesy of the US Federal Reserve just to promote one person's ulterior agenda?

We have several Soros activism stories including Steve Sailer's Ferguson Riots, Shootings: How Much Blood Do Holder and Soros Have on Their Hands?

George Soros and his fellow “activists” have become an international public menace.