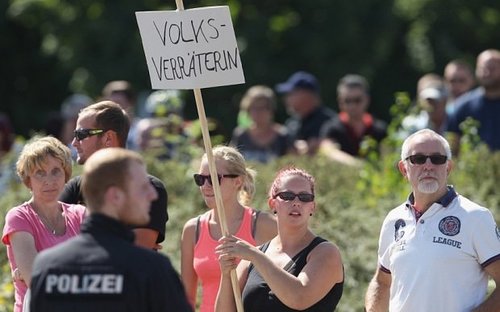 The Fire Rises...Germany Calls for Other EU States To Take in "Refugees"

Above, protesters don't like Merkel—"Volks-Verraterin" means "betrayer of her people"

Angela Merkel is not a very popular person in much of the European Union, and with the refugee crisis, there are challenges to her popularity even within the Fatherland. Recently, she visited a Muslim colony within Germany, or what is called a "refugee center." While there, like most contemporary "German" leaders, she paused to condemn her own people.

[M]rs Merkel was booed and denounced as a “traitor” by far-Right protesters as she visited the government migrant shelter in the small town of Heidenau, outside Dresden.

More than 30 police officers were injured in three nights of running battles with protesters trying to stop asylum-seekers from entering the shelter over the weekend.

“Germany will help where help is needed. This will require still more strength,” Mrs Merkel said.

“We cannot operate as if we were in a normal situation. We shall succeed only if we break new ground together.”

Germany takes in by far the most asylum-seekers of any EU state, and expects to host 800,000 this year.

Of course, as you can probably tell from most of the media coverage surrounding the "refugee crisis," the moral position the Main Stream Media wants us to take is that every Western nation (and only Western nations, oddly enough) has a responsibility to accept an unlimited number of Syrian refugees. If you question the wisdom of this endeavor, you are on the "far Right."

Not surprisingly, this stance has made Merkel a hero to many Syrians.

In the past few days, glorifying images of German Chancellor Angela Merkel have spread online through Syrian communities. Syrian poet Lukman Derky shared a number of images that praised Merkel, including the one below, which superimposed Merkel's face over a romantic poem.

The irony of all of this is that it is Western leaders like Merkel, David Cameron, Francois Hollande, and Barack Obama who are largely responsible for the crisis in Syria because of their stubborn support of a nonexistent "moderate" democratic opposition to Syrian President Bashar al-Assad. Incredibly, Merkel still maintains that Germany and other nations should not even open talks with al-Assad, even after everything that has happened [Merkel aide rules out working with Assad despite rise of Islamic State, Reuters, November 11, 2014].

In Syria and of course in Libya, events have largely played out just as the "isolationist" "far Right" predicted, and the so called democratic idealists have enabled incalculable suffering to millions in the Arab world.

Meanwhile, back in Europe, signaling virtue, appealing to the MSM, and moral preening is all very well, but no one actually believes the core nation of the European Union is actually going to benefit by the addition of hundreds of thousands of Muslim refugees. Even Merkel doesn't really believe it.

Germany called on Sunday for other European Union states to take in more refugees, saying it could not go on absorbing a disproportionate share of the thousands of asylum seekers arriving in the bloc.

Germany expects the number of asylum seekers it receives to quadruple to about 800,000 this year—a figure confirmed by Interior Minister Thomas de Maiziere on Sunday. However, two state premiers said the total could hit 1 million in 2015.

Some European governments have refused to take in refugees and resisted EU proposals to agree a common plan to do more to deal with the crisis, which is intensifying due to a surge in migrants fleeing war and poverty in Africa, Asia and the Middle East.

"If Europe has solidarity and we have also shown solidarity towards others, then we need to show solidarity now," Chancellor Angela Merkel told reporters in Berlin.

But I thought this was a simple moral question? Aren't these refugees a blessing to the German people anyway? And even if they're not, they are poor and desperate and Germany is rich and safe, so shouldn't Germans just let in as many as "need" help?

Implicit in all of this is the admission that refugees are a liability to the host country, and the more refugees, the greater the liability. And there are signs that Merkel and other leaders may be planning to use the refugee crisis they helped (deliberately?) create to force even more centralization in the dysfunctional European Union.

Germany's Thomas de Maiziere, Britain's Theresa May and France's Bernard Cazeneuve held talks on Saturday on the issue, on the sidelines of a meeting in Paris on transport security.

The trio "underlined the necessity to take immediate action to deal with the challenge from the migrant influx".

They also called for reception centres to be set up urgently in Italy and Greece in order to register new arrivals, and for a common EU list of "safe countries of origin" to be established.

During the early years of the American Republic, Alexander Hamilton used the issue of the federal debt to bind the disparate states together into a more centralized federal government. It appears the European Union is trying the same trick, only with human liabilities and with far less promise of a beneficial outcome. The European Union is becoming a suicide pact. The countries that will survive into the next century are those who ignore the Brussels bureaucracy's attempt to yoke all of Europe together into a demographic death spiral. Luckily, some nations, such as Hungary, are already showing such resistance.

On the other hand, Czech president Milos Zeman has an idea about how European unity would actually be useful in confronting the invasion.

Speaking to Czech ambassadors at Prague castle, Zeman regretted that Frontex, the EU border-control agency, has only three unarmed ships and a few armed ships to patrol the Mediterranean.

“The EU's fundamental lack is a lack of will for a common border protection”, Zeman said.

"Today, a common European army would come in handy" to address the issue, he added.

If people like Zeman were in charge, maybe a strong European Union wouldn't be such a bad idea.