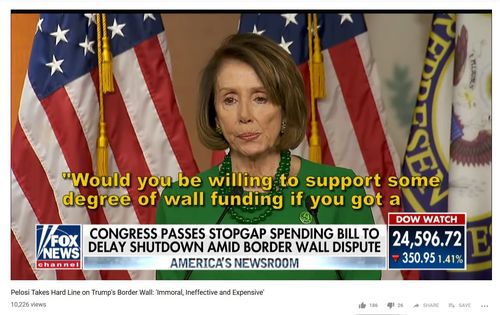 John Derbyshire: Is Trump’s Wall Really Immoral? What Would We Take Instead?

So there’s going to be at least a brief govenrment shutdown over the Democrats’ refusal to fund President Trump’s Wall. Good.

I cheered on the Wall when Trump put it at the front of his campaign in 2016. And of course we should have a secure barrier to separate us from the semi-barbarous countries to our south, most of which are not so much nation-states as criminal enterprises.

Still, I'm starting to worry that Trump's need for a Wall—and he really does need it, if he's not to be thrown out of office in 2020 to jeers of derision and hoots of contempt—I'm worrying that this Wall obsession is crowding out real patriotic immigration reform.

Last week I expressed my fear that the enemy—I mean, the open-borders nation-killers in Congress, the courts, and the media —might calculate that it would be worth giving Trump a wall, and maybe even four more years in the White House, if, in return, they got a total Amnesty for twenty or thirty million illegal aliens, perhaps with expedited citizenship, and big expansions of guest-worker programs, chain migration, refugee settlement, and so on. 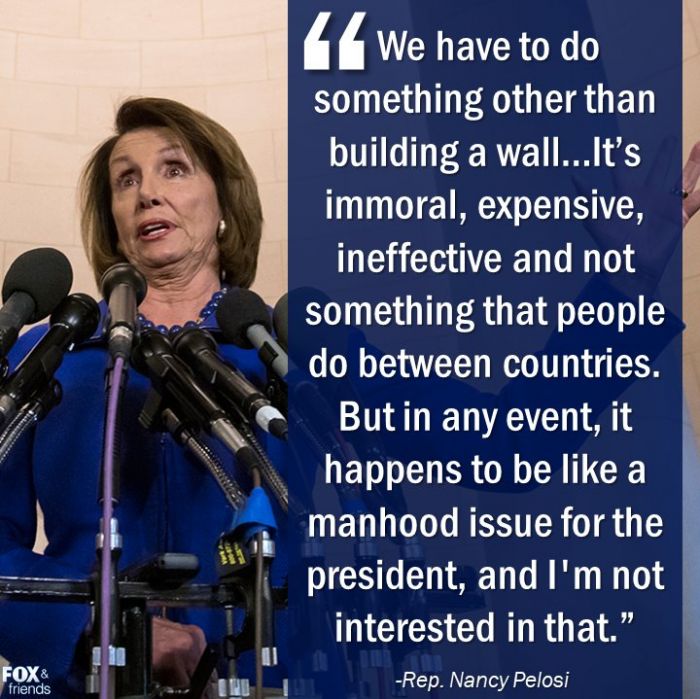 I want to see a wall, but not at that price. In fact, looking through the other end of the telescope, I'm asking myself what price I personally would accept for dropping all talk of a wall.

That's just me opinionating, of course. President Trump doesn't have the option of giving up on the Wall. He's too committed to it.

Those of us pushing for patriotic immigration reform do need to keep these other issues in play, though, and not let discussion of them get drowned out by Wall talk.

A Wall would be great. But it wouldn't restore our national sovereignty or demographic stability by itself.

Nancy Pelosi recently said on national TV that a border wall would be, her actual word, "immoral."

This is typical. To quote me in Chapter 10 of We Are Doomed:

Immigration is a difficult topic to discuss … The reason it is so difficult is that it has, more I think than any other aspect of U.S. policy, been moralized, in fact hyper-moralized.

They want morality? I’ll give them morality. There is a moral aspect to immigration policy that Pelosi and the other moralizers seem not to want to discuss. That is our strip-mining of poor countries for their most talented people.

“There are more Ethiopian doctors in Chicago than in Ethiopia.” That's from an Ethiopian-emigré website,  and the date, I should say, is 2010.

I'm going to post a slight skepticism on that one. The original source is Lefty British politician Glenys Kinnock, speaking in the European Parliament in 2006.[ WORLD HEALTH DAY: Africa Losing Skills to Europe, by Stefania Bianchi, IPS, April 7, 2006] As a Lefty, Ms Kinnock was, I suppose, trying to make a point about the wickedness of the First World, i.e. of white people. How does she square her point, I wonder, with Lefty enthusiasm for uncontrolled immigration?

The fact as stated is not implausible, though. The brain drain from poor countries to rich ones has been a talking-point among development economists for decades, and out of a class of 58 graduates in an Ethiopian medical school 15 years ago, 48 left the country, most to the US. [The doctor surge in Ethiopia, by William Foreman, Healthcare In America, August 18, 2016]

It ties in with Smart Fraction Theory, which argues that for national flourishing you need a certain minimum proportion of high-IQ citizens.

If Smart Fraction Theory is correct then regions like sub-Saharan Africa, with low mean IQ, while they undoubtedly have some smart people, may not have enough for stability and prosperity. And then rich-world immigration policies vacuum up most of the smart people they do have …

How is this moral?

Headline, this one more current: Romania's brain drain: Half of Romania's doctors left the country between 2009 and 2015. [Romania-insider.com, March 6, 2017] That's dated 2017, from an English-language Romanian website, which actually gives the numbers.

Still the lure of North American or West European salaries and standard of living is enough to entice away half the country's trained doctors.

So how come the immigration moralizers never talk about this? I've watched a lot of immigration chat on TV this past few weeks; I don't recall the topic coming up at all.

To the contrary, what does come up a lot is Republican politicians telling us we should be more choosy about who we admit—only the brightest, best-educated, most accomplished!

Don't those people's home countries need their bright, educated, accomplished citizens way more than we do? Could someone please ask moralist-in-chief Nancy Pelosi about this?

To end on a cople of cheeful notes:

Back in August I reported on illegal immigration from Africa into Spain, and wondered why Spain was the odd man out in Europe in hardly having any populist-nationalist agitation.

Well, a lot has changed since August. December 2nd there were elections for the regional parliament in Andalusia, just across the Straits of Gibraltar from North Africa. Andalusia is the most populous and the second-biggest by area of Spain's regions. It's been ruled by the Socialist Party for 36 years.

There are 109 seats in the parliament altogether, but winning twelve is still darn good for a new party. Vox is so new it hadn't made it into the tabulated "List of active nationalist parties in Europe" on the Wikipedia page of that title when I looked this afternoon, though Wikipedia had squinched a brief text note about them.

Good luck to Vox, and to the people of Spain in the fight for national sovereignty, demographic integrity, and independence!

Cheerful Note Two: Related good news from Europe—and with a tenuous historical connection to Spain—is the resignation of the left-liberal Prime Minister Charles Michel of Belgium on December 18.

What's the tenuous historical connection? Well, Belgium was once known as the Spanish Netherlands. Wake up there in the back row!

Prime Minister Michel's government had actually fallen apart two weeks ago. It was one of those coalition governments, and the biggest member of the coalition had withdrawn support when Mr Michel declared he would sign the U.N.'s Global Compact for Safe, Orderly and Regular Migration, which commits First World signatories to take in more Third World immigrants, both legal and illegal—the Compact doesn't differentiate.

That brought thousands of protestors out into the streets of Belgium's capital, Brussels—which is also the de facto capital of the European Union.

Things are really looking up over there.