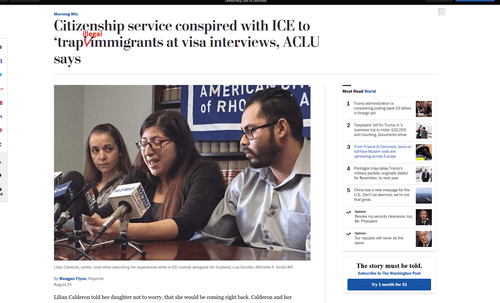 The #LyingPress And The Recent Contrived Immigration Crisis

The Lying Press is orchestrating numerous contrived immigration crises, the most famous being the fake news about separated children at the border.  Much like the open collusion among the press to attack President Trump on the same day,  these fake crises are obviously coordinated JournoList style— secretly, but the result is obvious.  The same story is shopped to various outlets, crying illegal aliens are trotted out, no tough questions are asked, illegality is downplayed, overlooked, or outright denied, they are law abiding illegal aliens who did nada.  And the Lying Press then sounds the alarm! The immigration agencies, in this case U.S. Citizenship and Immigration Services (USCIS) and U.S. Immigration and Customs Enforcement (ICE), are targeted and it is darkly hinted there is some illegality or some other immoral activity targeting innocent illegal aliens.  In this case the allegation is that USCIS and ICE are conspiring to arrest illegal aliens by baiting them into coming to the USCIS office to be arrested for no reason what so ever.

Jeff Bezo’s WaPo is leading the charge. They're not the only offenders, but they are acting as transcriptionists for illegal alien lobby groups, in this case the American Civil Liberties Union (ACLU).

Lilian Calderon told her daughter not to worry, that she would be coming right back. Calderon and her husband, Luis, had an interview they couldn’t miss at U.S. Citizenship and Immigration Services in Rhode Island Jan. 17.

All they had to do was prove their marriage was legitimate, the first step on a long path toward a green card. They brought family photographs, their children’s birth certificates and their marriage documents. Luis was a U.S. citizen. Calderon was undocumented. She had been brought to the United States illegally from Guatemala when she was 3.

The interviews were quick and painless. Calderon’s included “football banter,” she said.

Then the monster with a chain saw appears like a cheap Hollywood horror flick:

But then ICE showed up — and it was quickly clear to Calderon that she would not be returning home to her daughter.

The 30-year-old mother of two wound up handcuffed and then detained by U.S. Immigration and Customs Enforcement for nearly a month, capturing the attention of the ACLU and leading to a class-action lawsuit over what attorneys have described as a “cruel bait and switch” arrest operation. According to emails between federal officials unsealed in federal court documents this week, U.S. Citizenship and Immigration Services had been coordinating with ICE to alert the agency when certain immigrants eligible for deportation showed up at the CIS office for routine interviews.

The next step for the Lying Press is repeat without any investigation the claims by the illegals, the ACLU, or some Treason Bar shyster.  Here little Meagan follows all the orders from the JournoList instructor.  Note the “routine interviews” above.  No such thing.  There are no routine interviews, especially when an illegal alien is involved, especially one with an outstanding deportation order, as Calderon had.

The ACLU of Massachusetts is accusing the agencies of conspiring to “trap” unsuspecting immigrants on a path toward legal permanent residency by inviting them to these interviews only for ICE to arrest them there. This happened to at least 17 people in 2018 including Calderon, although only 13 qualify as members of the class, according to the lawsuit. The ACLU argues this violates their rights to due process and the Immigration Nationality Act, among other things, for detaining the immigrants before they’ve had a chance to complete the process for seeking legal status.

So, two components of the Department of Homeland Security (DHS) are “conspiring to ‘trap'” an illegal alien.  Little Meagan of the WaPo, who apparently has a degree in journalism of some sort, just repeats the baseless accusations using deliberately misleading terms, nor does she do any investigation into the claims of the ACLU.

First, that USCIS and ICE “conspired” to arrest “unsuspecting immigrants.”  That is an outright lie.  It is the deliberate and systematic misuse of words with specific legal meaning, words with deliberately negative connotations.

A “conspiracy” is the agreement among two or more persons to commit an illegal act, who at least one person performs an overt act in furtherance of the illegal act.  A more colloquial definition is a combination of persons for a secret, unlawful, or evil act.  None of this applies to the cooperation between two Federal law enforcement agencies to make a lawful arrest.  This is typical of the conspiracy among journalists to defame, demean, and attack those whom the journalists oppose, such as Federal immigration officers.  One cannot conspire to perform a legal act.

Some facts that little Miss Meagan did not research before she transcribed her story from the ACLU or her superiors at JournoList.

First, the aliens in question, like the illegal alien Lilian Calderon, could not legally adjust their status in the United States.

In Calderon’s case, she had been subject to a final order of removal since 2002, when her father’s application for asylum was denied. She was 15. Her path to legal permanent residency was enhanced in 2016, however, because a change in USCIS regulations allowed people subject to final removal orders to still apply for a green card without being forced to leave the country.

Fake News!  Illegal aliens with an outstanding order of removal cannot adjust status in the United States.  A U.S. citizen may file a petition (Form I-130 Petition for Alien Relative), but not an application to adjust status (Form I-485, Application to Register Permanent Residence or Adjust Status) on behalf of an alien; basically the petitioner on behalf of the alien may establish the legal relationship by filing the I-130, but the application to adjust status in the United States may not be submitted or approved, as any recourse was ended by the Final Order of Removal. In the case of Calderon, she failed to appeal her removal order and has no recourse.  However, the Lying Press representative, little Miss Meagan, did no research on the issue, just repeating talking points from the ACLU and the new JournoList.  You can contact little Miss Meagan here and let her know that you know about her journalistic “ethics” and training.

Furthermore, there is no process for a waiver of the grounds of inadmissibility while there is an outstanding final order of removal.  A waiver, Form I-601, Application for Waiver of Grounds of Inadmissibility, is not available when the above Form I-485 is also not available to the alien with a final order of removal. Nor is the illegal Obama program of pre-approving Form I-601s before the alien departed the United States for consular processing available, as there is no application filed and hence not justiciable.

The Big Lie that Miss Meagan spreads though is that the cooperation between USCIS and ICE is somehow illegitimate, illegal, or immoral.  Such cooperation between the two components of DHS is none of those.  In fact, such cooperation is required by law and policy.  Nor is this some Trump Administration creation as implied by the liar Miss Meagan.  Before President Trump, USCIS and ICE were cooperating, though the Obama Regime discouraged that cooperation illegally and secretly, as represented by the terrorist supporters in USCIS.  By the way, Sleepy Jeff Sessions still has not decided on prosecution of Irene Martin yet.  I wonder why.  Before Obama, there was much greater cooperation.

However, this issue, the fact that the article describes ICE officers having to drive over to USCIS offices to make arrests does highlight a problem.

Graham explained this arrest operation in detailed emails to multiple Boston field office employees. Typically, he wrote, CIS would send ICE a list of immigrants seeking to schedule interviews. CIS would flag immigrants who were subject to final removal orders, who had illegally reentered the country or who were “egregious criminal aliens.” ICE would then vet the potential arrest targets and respond to CIS with a list of immigrants it wanted to arrest during their interviews.

CIS completes the interview while our officers are en route,” Graham explained in the Jan. 30 email.

The problem is that ICE and USCIS are no longer one agency as they were before the Homeland Security Act of 2002; ICE and USCIS were once just parts of the Immigration and Naturalization Service (INS), and those functions were co-located in the same office under the same management.  Previously, aliens such as Calderon who showed up and applied for a benefit while illegal or with a final order of removal were immediately arrested; they were not allowed to file and have adjudicated the Form I-130.  It is time to abolish ICE, and USCIS, and CBP, and bring back the INS!  One face of immigration enforcement where officers don’t have to drive miles to make an arrest in a DHS office.  We must return to one stop shopping for your deportation needs.

The press lies.  They lie shamelessly.  They lie for political reasons.  They lie to elect a new people.  Time for action against the LugenPresse!